If we were in the Middle Ages, these elite Filipinos would have been adorned by throngs and throngs of slaves and order-takers. And though their enviable wealth may not be measured in gold today, still it’s enough to make any aspiring Juan (Tamad and otherwise) to drool and roll over.

Each may have their own ‘secret’ formula to their resounding success. Call it luck, but it’s no coincidence. They were not just at the right place at the right time. They were the right people. Seeing a window of opportunity and turning it into a gold mine where less-endowed mortals may see nothing.

The rest is history.

For sure, these men are like magnets – attracting the best talent, the best deals and along with it a string of relentless critics and detractors. Before any Pinoy worth his salt start throwing hypothetical stones however, let us go down first and foremost to the nitty-gritty.

Behold, the top 10 richest true blue Filipinos in 2013. Unfortunately, this elite list is an exclusive one, at least for the time being. As no woman has made it thus far.At least, not as a single entry. Although, comparing each one with the likes of Oprah would be a good vantage point. But that would deserve another article altogether. 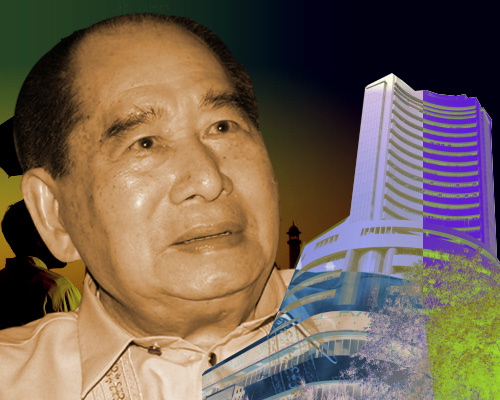 Leading the pack is an 89-year old Chinese immigrant from Xiamen China who may have already carved his luck even from birth, being born on Christmas Day in the year 1924.

Henry Sy’s is a rags to riches story growing up poor and starting his giant chain of stores with a small humble store in Quiapo, Manila. Philippine’s retail king is definitely a long way off from the time he first set foot on Philippine soil at a tender age of 12 and the years when he and his father, Henry H. Sy, a small-time grocery store owner, shared a tiny abode of about 30 square meters of floor area in the largely inhospitable streets of Quiapo.

Aside from SM City and the retail business, Henry Sy has diversified, going into a lot of other business which has come to include real estate and banking, transforming Banco de Oro from a so-so bank into the preeminent bank that it has become today.

Henry Sy is a graduate of Far Eastern University. 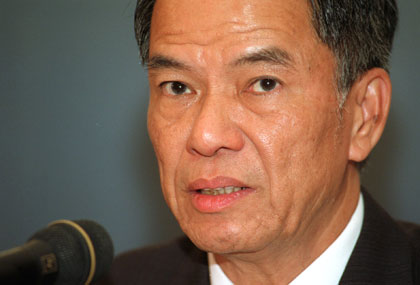 It may come as no surprise, the next billionaire hails from the same place as the first: Xiamen, China. Aged 79, Lucio Tan is another rag to riches story coming to the Philippines at a young age and remarkably bereft of any financial clout.

Today, there are over 300 companies under his wing. Most noteworthy of these are Philippine Air Lines and Tanduay Holdings, makers of the rhum that has become a household word nationwide, Tanduay 65, and Asia Brewery, country’s second leading beer-maker. And although, the business magnate does not smoke, he runs Fortune Tobacco Corp., country’s leading tobacco manufacturer.

El Kapitan as Lucio Tan is fondly called, is certainly a long way off when he started out his career as janitor in a cigarette company. 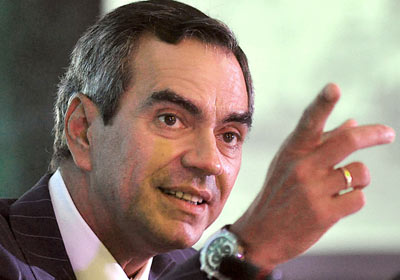 A graduate of De la Salle University (BSBA), the third richest billionaire in this exclusive line up holds the most successfully-managed port-handling facilities in the country, International Container Terminal Services, Inc. (ICTSI).

Unlike the top 2, Razon has Spanish roots with his grandfather coming from the European nation itself, settling down in the Philippines in the early 20th century. Added to this, the young tycoon inherited his container port terminal business from his father who incidentally bears the same name.

Born on the 2nd day of March, 1960 this business magnate has since diversified into the casino business among other businesses putting a whopping $200 million into Bloomberry Investment Holdings, Inc.

Razon’sfortunes has increased steadily, jumping to become the third richest in the country from the fourth the year before. 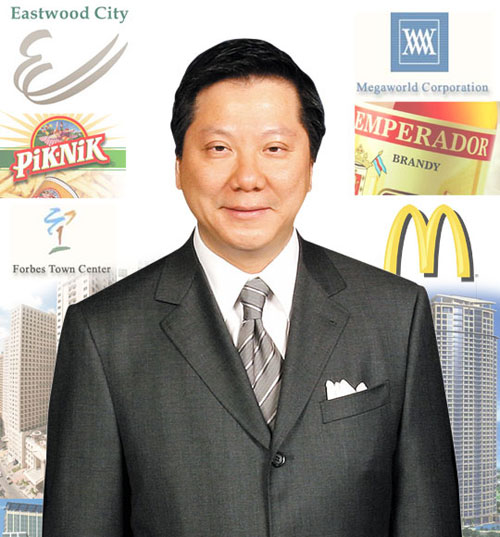 This fourth billionaire is another immigrant from China having been born in the Fujian province. With an accounting degree from University of the East, Andrew Tan has gloriously navigated his Emperador Brandy brand to largely profitable waters both in the Philippines and worldwide claiming the distinction of the world’s best-selling brandy in 2006.

The 60-year-old business magnate has interests in fast food and real estate and like most of the A-listers here of Chinese origin has had his share of the dirt-laden poverty road sometimes walking to school, his alma mater UE, for lack of transport money. 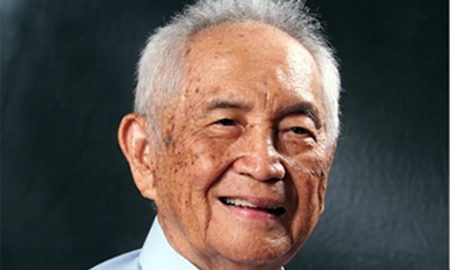 Dubbed as the “construction magnate” of the Philippines, David Consunji, 91 years old, used to be in public service serving as the Secretary of the Department of Public Works, Transportation and Communication under the Marcos regime. He founded DMCI, the country’s primary source of general construction services.

Today, some of the well-known infrastructure projects in real estate have been been built by DMCI namely: Solaire Resort & Casino, SM Megamall, MakatiShangri-la, to name a few. 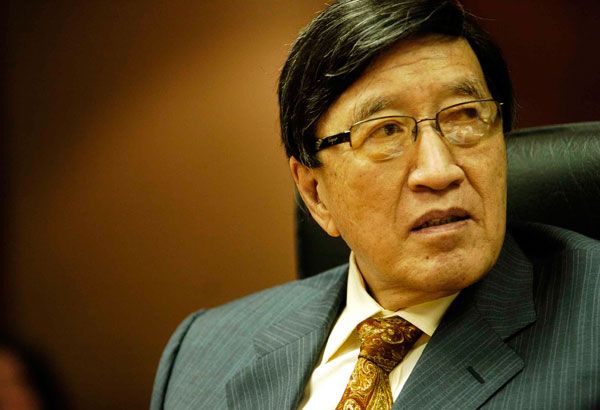 This 80-year-old banking taipan is best known as the founder of Metrobank, one of the top 5 banks in the whole country. Conferred an honorary doctorate, Dr. George S.K. Ty (full name) is originally from Hong Kong, eventually taking up residence in Binondo, Manila, a place which soon became the site of his first Metrobank branch.

Mr. Ty has been a shining example of business excellence putting up MetroBank Foundation, for instance, to help the community. Other notable businesses under his wing include: Toyota Motors Phils., Federal Land Inc. and Philippine AXA Life Insurance Corporation. 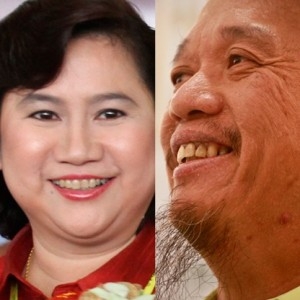 This happy couple – the only couple in this list – is the second largest retailer in the country establishing over 150 hypermarts, discount stores and supermarkets nationwide with their Puregold Price Club. It seems the Cos have struck gold with their retail chain. Their business acumen has payed off big time, targeting middle-class retail supplying to thousands of sari-sari stores nationwide. 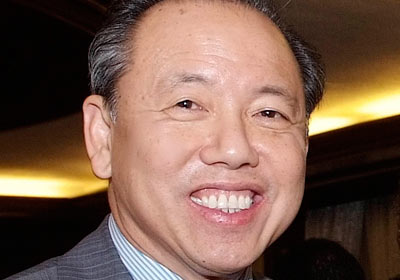 Another Filipino with Chinese origin, the 60-year-old taipan Robert Coyiuto draws his wealth mainly from the power industry, owning up to 30% stocks of the country’s premier power industry player, National Grid Corporation.

Additionally, Mr.Coyiuto sits as a one of the Board of Directors of Gokongwei’s Universal Robina Corporation. Chairman and CEO of the Coyuito Group of Companies, an industry leader which has stakes in insurance, real estate and the publication industry. 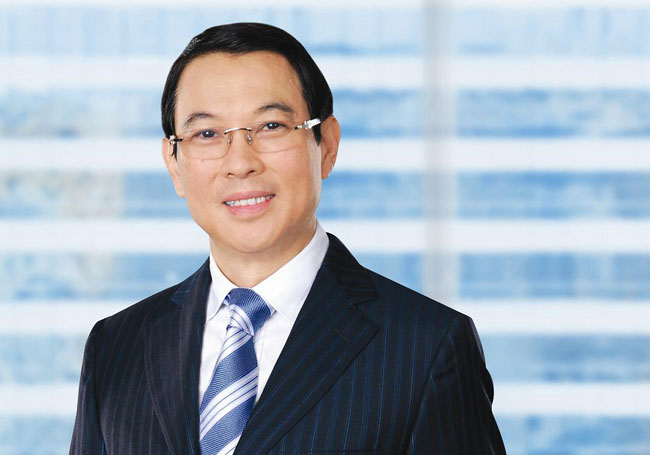 A graduate of Far Eastern University, this Filipino-Chinese business tycoon has built the country’s most successful food chain, Jollibee, from the ground up starting with but 2 ice cream parlors when he was 22 years old. He soon found his way to the chicken business competing with such established brands us McDonald’s, and successfully giving Mr. Ronald a beating nationwide.

A native of Davao City, this fast-food chain franchise king has made his mark here in the Philippines and abroad, opening over 2,500 outlets in total. 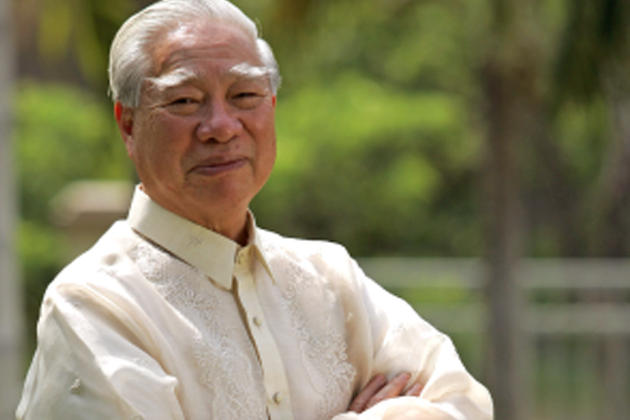 Well, this real estate magnate could be the only Cebuano-speaking billionaire in this line-up. A member of the illustrious Go clan of Cebu, Andrew Gotianun has built some of the most beautiful real estate properties in Planet Philippines with his lead company Filinvest Land.

Together with his family, this 85-years-old Filipino-Chinese businessman, has interests in banking through his East-West Bank and other industries. He is a cousin of another Cebuano billionaire John Gokongwei.

So there you have it, ladies and gentlemen. I hope this has made your minutes worth the while. It’s easy to be awestruck with all these riches being paraded here. If only getting these billions was as easy as scratching the pages of this article, then I would have bore a hole in this laptop.

Anyway, please do send me your comments, however out-of-this world it maybe. I would definitely want to hear from you. And if things are looking good, please share this to a friend who may need a lift. Who knows it could earn you pogi points in the blessings department and you’d be off to your first foray in business. As the saying goes, “Journey to a thousand miles start in one step.”