Top 10 Criminals in the Philippines

Now, now. Here’s a list you would not want to volunteer yourself to be part of. Granting you value your freedom and the things you enjoy in your everyday life – without the constraints of prison or the law running after you like hunters out to snare an errant crocodile.

Outlaws have always had their own stories to tell. No question about that. And many of these people who belong here have become legends in some sort of way. I don’t want to glorify society’s top menace – especially since taking lives is a rather common habit in many of them. Although I believe, these people could have become useful contributors to society. Akin to the operatic movie adaptation of Victor Hugo’s “Les Miserables”.

However, delving into what-if’s is a seemingly endless scenario best suited for scholarly psychologists or those experienced ‘doctors of the mind’, psychiatrists.

So with malice to none and without prejudice to many, presenting, the Top 10 Criminals in the Philippines for all time. Nothing more, nothing less. 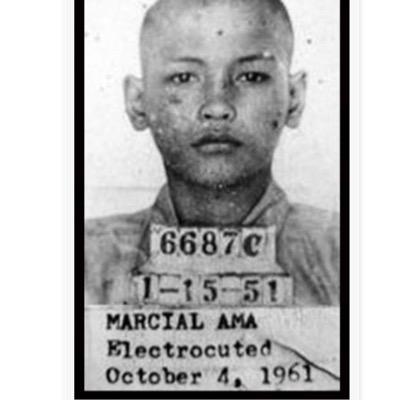 With all the talk and a recent movie to boot starring Robin Padilla in “Anak ni Baby Ama”, this outlaw has his name etched in stone. To note, his life was already caught in film in 1976 with the flick “Bitayin si Baby Ama” with the late Rudy Fernandez and sex icon Alma Moreno taking the lead roles.

Baby Ama got his moniker because of his baby face good looks. Born poor in the streets of Tondo, Manila, he soon found his way to jail for thievery. His handsome face got the better of him though as he was repeatedly sodomized in prison. However, the final straw that broke the camel’s back was when his pregnant wife was allegedly raped by a prison guard, an event which pushed her to commit suicide. With all the hate inside of him, Baby Ama rose to become the leader of “Sige sige” gang, a group which under his leadership took part in the largest jail-riot againt a rival gang “Oxo oxo” in Muntinlupa which ended in 9 prisoners dead with 1 beheaded.

Although pardoned and his sentence was commuted to life, Baby Ama was still electrocuted in 1961. He was 16 years old. 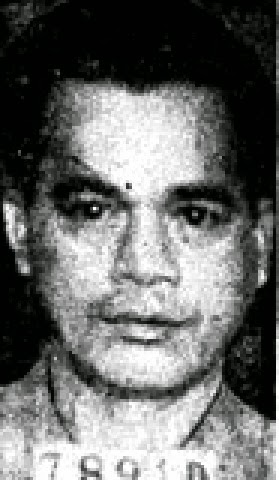 Another outlaw portrayed in film, but this time of a much older man. Nardong Putik’s name started hitting the headlines while still young as one of the alleged participant in the Maragondon massacre, a bloodbath where the mayor along the police chief and several policemen were murdered by hunting knives-wielding criminals. He was imprisoned by he eventually escaped, a pattern that will soon be his trademark.

Portrayed by the “anting-anting” master Sen. Ramon Revilla, Nardong Putik’s celebrated escapes made him notorious and was eventually sentenced to 182 years imprisonment. He escaped again in 1969 and rose to become Cavite’s Public Enemy No. 1 as the leader of a notorious gang operating drugs, smuggling, carnapping ring. After a massive manhunt, the long arm finally caught up with the “Robin Hood” of Cavite and was killed inside his red Impala car by a rain of bullets coming from 20 NBI agents led by agent Epimaco Velasco. He was 47. Masses liked him because he was generous to them. 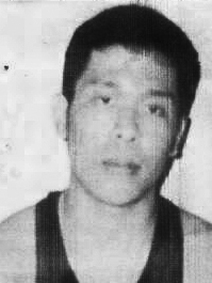 This one is from Cebu and it seems he has a boundless appetite for raping women. Rumor has it that Waway has supernatural powers and is bent on raping and slaying 40 people a day. He has stricken fear so much in the ordinary Cebuanos that his posters bearing his photo are spread all over the island. For the record, a string of suits involving rape has been filed against him but most are settled out of court.

Waway was never put to jail and his name eventually became useful as a deterrent against minors in staying late. 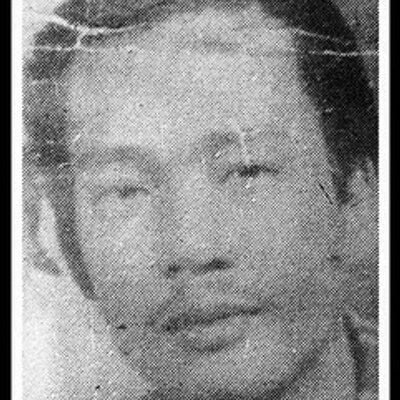 Here’s another lawbreaker from Tondo, Manila. A notorious gang leader Asing Salonga struck fear in the very heart of Tondo, going against rival gangs operating in the area. A host of crimes including murder and homicide have been attributed to him but he always manages to come out clean.

On October 7, 1951 while out drinking after a baptism, he was gunned by a henchman of a rival group. He was only 27.

However, it seems folklore is out to revive him forever. To date, no less than 3 movies have been done depicting Tondo’s #1 tough guy, “Asiong Salonga” (1961) starring Joseph Estrada, and a repeat in 1977 starring Rudy Fernandez. Lastly another hit movie surfaced “Asiong Salonga: Hari ng Tondo” with George Estregan Jr. in the lead role in 1990.

Butch was one of the youngest gang leader in the underworld and was convicted in a sensational homicide case. He was a radical that was indoctrinated by the Communist. However, his story had a happy ending as he soon found his calling in serving God. He spent his prison days writing exposing the injustices of the system from within. 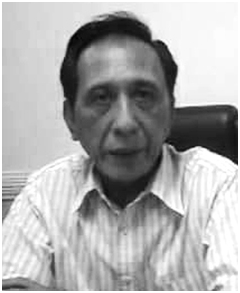 Now here’s another lawless man turned into a man of the law. Born to a good family, Bingbong is the son of the Governor of Ilocos Sur but soon made headlines spreading terror all over the province in a spate of crimes. He was eventually imprisoned in Muntinlupa after sentenced to double life imprisonment for arson.

Things turned out well for him however. He had a change of heart while in prison and eventually he served his people becoming the congressman of the first district of Quezon City. He is the maternal cousin of Governor Chavit Singson.

This one’s caught the movies too. Ben Tumbling is a former stuntman turned police hater turned multi-faceted criminal. His exploits have come to include robberies, drug trafficking and murder. To his account, 7 policemen have been shot dead. Hailing from Malabon, he soon gained notoriety as the feared policeman killer. His hatred for the police has similar roots to another A-lister here, Baby Ama, as allegedly his young wife was raped by police while he suffered from police brutality, his genitals electrocuted and his head hit hard by a chair.

As fate would have it, Ben’s acrobatic life ended on Friday the 13th of March 1981 in the hands of police who chased and shot him. It is said that people of Malabon wept openly because of the incident. He was 23 years old. 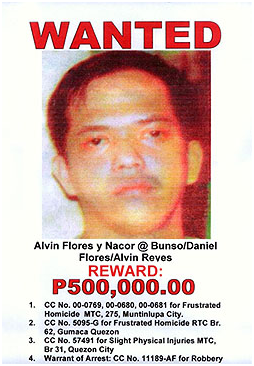 This one’s another one from Cebu. Trained and recruited by the feared ABB, Alex Boncayao Brigade, Alvin soon found a way to utilize his newfound skills towards a more lucrative end. Putting up a gang, his name was soon linked to a series of daring robberies including the Greenbelt 5 heist in 2009. He soon ran out of luck even with his supposedly changed image (he had a plastic surgery) and was gunned down in Compostela, Cebu. 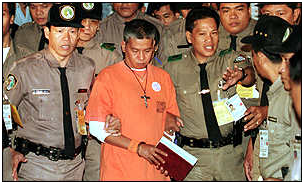 As the first Filipino convict to be meted out death by lethal injection Leo Echegaray’s name solicits fear among many Filipinos. And rightfully so. Convicted of the crime of raping his own daughter several times, Echegaray was executed on the 5th day of February, 1999. 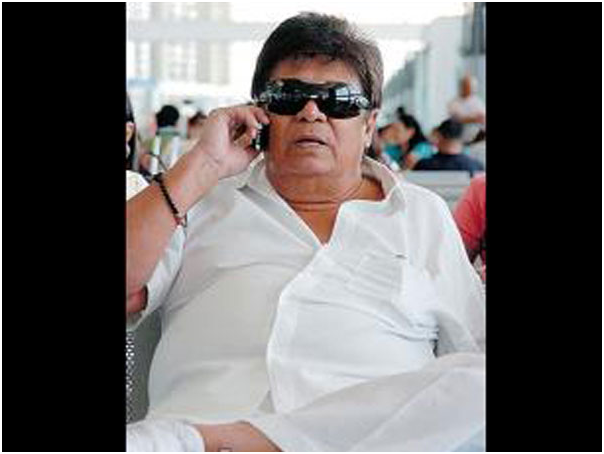 Our last entry seems to be the richest in this A-lister. Jalosjos is a political kingpin coming from a rich clan who it is said owns some shares in TV Network GMA and is also the owner/operator of posh beach resort Dakak. He found fame as the congressman representative of Zamboanga del Norte but fell out of grace when he was convicted of raping an 11-year-old girl in 1996.

His sentence has been commuted by President Arroyo and he walked out of prison in 2009. However, the Supreme Court has decided with finality in 2013 that he could no longer hold a public office.

For more of the details, please look into the matter here.

There you have it friends, Pinoys, fellow countrymen, the most sinister, perhaps most-loathed denizens of our motherland, the Pearl of the Orient Seas, Philippines. Hope that went well with you.

Please show us a piece of your mind. Let us benefit from the freedom that have been endowed to us – albeit rather limited. Speak freely and drop us some notes in the comment section provided below. I’d love to hear from you. No kidding.

And lastly, I enjoin you to take part in our little dissemination campaign. Please share this info-tainment to your circle or workmates, friends and drinking buddies, assuming you go to a gulping marathon every now and then. Though Buddha – in his Law of Karma – has his own version Jesus said it best (if I recall it correctly), “Do unto others what you want others to do unto you.”