Decision making is their ultimate brand. As guardians to the Filipino masses, these politicians have bridged islands, changed the landscape, created roads and affected every Juan – down even to how much cab fare is necessary. But when their decisions get murky, the results are anybody’s guess.

Hailed and elected, they seem to carry the message of hope to the masses. Like they always had since Pontius Pilate washed his hands over an accused named Jesus of Nazareth. Underneath the aura of invincibility and the throngs and throngs of followers, are men who must weigh things out and look forward to a long-lasting political career. Quezon survived his, no doubt. Even with the nation still wallowing in poverty. And I certainly hope Isko Moreno survive with the truck ban in Manila. 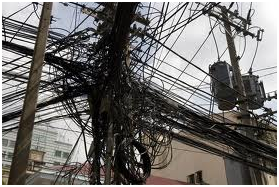 Fine ladies and brave gentlemen of the hour, the top 10 political scandals that shocked the whole 7,100+ islands to the core. The A-listers here are based plainly on political decisions and do not include sex-related incidents. First stop. The latest and perhaps the most endangered political triumvirate today. Reminiscent of Julius Caesar’s time. PDAF Queen Napoles did not implicate them, showing off to the public her selective memory and an advanced expertise in that art of denial. But Ombudsman on the first week of April 2014 has officially charged them with plunder. They were tagged in PDI as “kuya”, “sexy” at si “pogi”. 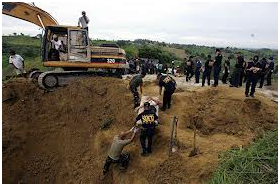 This is the most brutal of the bunch. Sensing perhaps his political downfall facing an electoral run for the governorship, he allegedly had a band of over 50 people together in transit killed en masse and brutalized. Women, suffered most, with vital parts (e.g., sexual organ, boobs) taken out. The ill-fated caravan was composed of the wife of a rival politician who was on the way to file her candidacy. Along with her were lady relatives and teams of media men and women.

As things turn out, he was imprisoned and what he feared most transpired: his rival is now the sitting governor and his whole clan’s political future uncertain. 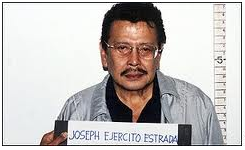 The rise and fall of Erap. After another EDSA, he relinquished his post as commander-in-chief of the land, the 2nd president to do that. However, Sandiganbayan under the rule of his political enemies found him guilty of plunder and he was imprisoned “reclusion perpetua”.

As fate would have it, the actor-president was pardoned and today enjoys ruling the capital city of the country as mayor. Not bad but could be better. Now the tables are turned. Before, her political rival was charged and found guilty of plunder. Now, under the rule of an Aquino, she is in hot waters for the same charges for stealing Php 900 million in the Malampaya fund. Even if her medical condition has relegated her to the wheelchair. They ruled the Philippine for decades. When it was all over, they had to flee. Good thing they were ousted by a peaceful People Power revolution. Charged with emptying the national coffers, they were rumored to carry vast unimaginable riches and a government agency was instituted with one goal: to dig up their ill-gotten wealth. Although, charges were denied, the former first lady displayed her shoe dynasty with price, a collection of about 3,000 pairs of shoes. Imeldific! 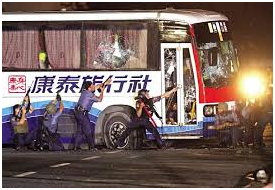 There is no escaping for this one. A truly horrific event which made PNP a laughing stock worldwide. Thanks to the internet. The events happened in Rizal Park but may as well have happened in Hong Kong for the backlash it now enjoys. A renegade police officer hostages a bus full of tourists. After a 10-hour stand-off and bad calls by crisis managers, 9 people were dead, 8 of them hostages. Most of the bullets that killed the hostages, most were Hong Kongers on vacation, came from rescuing officers. To add injury to insult, the event happened while the Manila mayor, the mayor in-charge, was having lunch, another political blunder for most.

It may have been his prerogative. However, eyebrows were raised when over a million pesos were given to his fave ally senators as bonuses for Christmas 2012 but a measly few hundred thousand pesos were received by 4 not-so-close “unfriendly” senators. He survived the backlash but his son lost the subsequent senatorial elections in 2013.

The super-typhoon only highlighted a great political divide. Wanting to formalize everything, the DILG secretary asked the Tacloban City Mayor to sign an official document to dispel any grey areas. But the mayor refused to sign. Instead he cried foul, saying the national government is politicking and withholding aid. Mayor belongs to Marcos clan, a political enemy of the sitting president. Enter YouTube and a series of ‘doctored’ videos and you got yourself a battle of videos.

Eight high-ranking police officers, top brass of the PNP, went to Russia on October 2008 for the 77th InterPol General Assembly. Who they were, were not as surprising as what they brought. It turned out they were bringing along with them, PhP 9.2 million in cold cash. Russian authorities jailed the officer who hand-carried the undeclared amount, former PNP comptroller Eliseo de la Paz.

A flurry of charges have been filed by the Ombudsman. 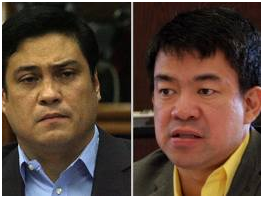 This one ended amicably but shows the dirty side of Philippine politics. Aspiring senator files protest after the 2007 Senate election. He decried massive cheating citing the fact that it is impossible for him to get a zero vote in a Mindanao region, an incident which befell him and his teammates, and that he should have been the 12th winning senator, not the losing 13th. The region in question is the region of the Ampatuans, the political clan mentioned in this A-list. Good thing, the sitting 12th senator, decided to resign in 2011 after irregularities were bared by the Ampatuans themselves.

Aspiring senator is now a sitting senator. After 4 years from the election. 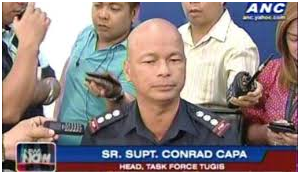 He and his Task Force Tugis team made good, capturing a most-wanted rich businessman fugitive who allegedly duped people of billions of pesos, after months and months of surveillance. But he eventually caught the ire of many of his superiors, the President including, when he was dutifully transferred to another post, in the Visayas Region. Police officer cried foul over media, criticising superiors and citing the imprisoned businessman’s protector are out to get him.

There you have it folks. Hope that hit the ball out of the ball park, as I always say. If I have missed the cut, please drop us your 2 cents in the comments section below.

And join us in our little sharing campaign. Forward this article to everyone you feel like needing a good laugh or two. Funny how I wish YouTube was born in the old days and it would have been possible for us to see the late Manuel L. Quezon pronounce, “I’d rather have a Philippines run like hell by Filipinos than a Philippines ran like heaven by Americans.”

O how many would have pelted him with stones if that decision was made today. But that’s just the Steven Spielberg in me theorizing scenes.