What is it with airplane disasters that make them so heart-stopping and mind-boggling at the same time? MH 370, for instance.That mysterious Malaysian Airlines flight gone haywire. Lost like a bubble, in an ocean of endless possibilities. The name alone strikes fear in the hearts of men. Fear of the unknown. And unimaginable sorrow for those left behind. Yes, no doubt. Airplane disasters can be as mind-blowing as you can get. All the gore, the suspense, the drama of it all. On a greater context, it is also speaks of the humbling of man. With its might and taunting bravado, airplanes in flight highlight the stunning speed by which man has arrived – declaring himself Lord of the Earth and Skies. Unfortunately, airplane disasters puts his face smack right at reality: He’s but a speck. And before his apparent arrogance, a largely unconquered universe – an abyss that would put all the oceans of the Earth to shame.

Fine ladies and gentlemen of the hour, with a certain sadness I bring you the Top 10 most tragic airplane disasters in Philippine history: 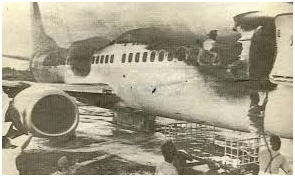 This Boeing 737-300 plane was still off the skies, parked in the NAIA airport, en route to Iloilo City. Still it did not stop the simmering heat and airplane complications to claim lives as passengers were already lodged inside the plane. Culprit: Ground fuel tank explosion. This aircraft maybe small but when it crashed into the Felixberto Serrano Elementary School in Parañaque, Philippines, all hell broke loose: 50 houses on fire, people on the ground killed. Probable cause: Pilot error. 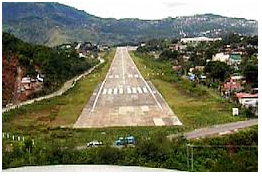 From NAIA, this Let L-410 Turbolet plane crashed onto a mountainside between the municipalities of Kasibu, Nueva Viscaya and Cabarroguis, Quirino for unknown reasons. All passengers, including 2 foreigners, Koji Takuma from Japan and a certain Robert Sinnott from UK, and crew of the small plane died. 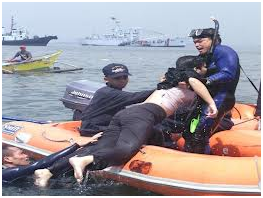 Everything seemed fine till things started to get awry. This Fokker F-27 Friendship plane was bound for Laoag. However, shortly after take off, it crashed into Manila Bay killing most of its passengers. Few survived. Cause: Pilot error. A month after the incident, Paul Ng, owner of Laog International Airlines was arrested for working without proper permit. Franchise for his airlines was eventually revoked. 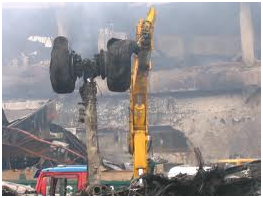 Caught against turbulent high winds in the middle of heavy rainstorm which induced poor visibility, this BAC One-Eleven aircraft crashed, striking a mango tree in a suburban area in Antipolo City. It came from Mactan-Cebu International Airport. Pilot was the father of actor Matt Ranillo III. During that time, it was considered the worst accident involving a BAC One-Eleven plane. Just 10 minutes, and this Hawker Siddeley HS 748 plane coming from Manila Domestic Airport would have landed in its designated destination, Loakan Airport, Baguio City. Upon approach, the pilot reported poor visibility and was never heard again. Wreckage was seen 5 hours after last radio check in. Nobody survived.

There is still an ongoing debate as to the real reason why this McDonnell Douglas DC-9-32 domestic flight crashed on the slopes of Mount Sumagaya in Claveria, Misamis Oriental. But Jesus Dureza, crisis manager for the retrieval and rescue found out that the ATO maps used by the pilots were faulty, indicating 5,000 feet for a 6,000 feet above sea level mountain.

The flight took off from NAIA and was bound to Lumbia Airport in Cagayan de Oro City. ATO officials said otherwise, putting the blame on deficiencies in pilot training. All passengers and crew, including a handful of foreigners and children, were killed. 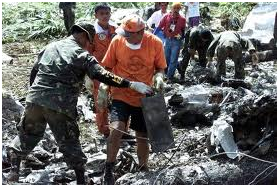 From NAIA, this airplane was already about to land in Davao International Airport – putting its passengers to safety and needed respite. However, without warning things went awry and the airplane crashed. Everybody who boarded the plane, from crew to passengers, ended up dead.

Upon investigation it was found out that the aircraft, a Boeing 737-2H4 had to circle in low clouds waiting, as there was another aircraft on the runway. Unfortunately, it slammed into a coconut plantation, located 500 ft. above sea level.

This is the deadliest air disaster to date. This is one of the few crashes that placed the whole nation in mourning. The Piper PA-34 Seneca is but a small plane but it carried a well-loved servant, a national leader: DILG Secretary Jesse Robredo, a modern equivalent of President Ramon Magsaysay. Supposedly, he was booked to fly an airline flight but changed his mind and chose a private plane to see his family in Naga. His aide is the lone survivor. Culprit: Pilot error.

It was a newly reconditioned twin engine C-47A-75-DL Skytrain, 42-100925, c/n 19388, operated by the Air Force. Named “Mt. Pinatubo”, it crashed on the slopes of Mt. Manunggal, Cebu. The mishap changed the course of history of the whole Philippines. For the plane is the official presidential plane of the president and it was carrying incumbent President Ramon Magsaysay. He came from Cebu preparing for reelection, an exercise he was poised to win. Amazingly, a reporter from Philippine Herald is the lone survivor.

There you have it, folks. Another Top 10 served hot and spicy. Should there be anything left out, please let me know in the comments section.

Allow me to invite you to pitch in our Little Dissemination campaign. Don’t get us wrong. We’re not going the Wiki way asking for you to part a quaint portion of your hard-earned cash. Join us in sharing this info-tainment bit to your circle and we’re good to go. Truly, those who fail to learn the lessons of the past are bound to repeat it.

Like that Metallica song, it’s tragic: Sad but True.