Top 10 Best Festivals In The Philippines

If you can shake this whole Filipino nation down to its bare essentials, you’ll find some interesting things that’s for sure. Yet one of the few things that you cannot shake off – try as you may – from this fun-loving nation’s core, is, you guess it right: festivals and merry-making. Of course, aside from the people’s political nature and heavy emphasis on Christianity – however twisted it may be. 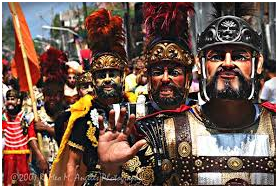 Thanks perhaps to the Spaniards. It’s more fun in the Philippines. Fiestas, festivals or whatever you call it, are etched in the “spinal cord” of the nation. With hundreds of patron saints to honor, a cause dwarfed only by thousands more reasons to celebrate, Filipinos are truly a gregarious populace. So much so that they say if you’re in Bohol, every day is fiesta day. From May 1 to the end of the month! All you need to survive is transportation money, with plenty of food to drown your palate in various towns only in the land of the Tarsiers. Granting you’re invited, of course. But hey, in the provinces, everyone’s supposed to be invited, aren’t they?

Fellow kababayans, without further ado, the Top 10 Festivals in the Philippines! 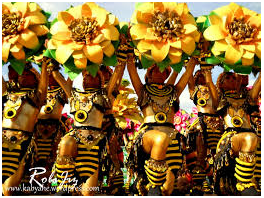 Owe it to the bees, Buyogan ,a term rooted in “buyog”, Visayan for the honey-making insect, is filled with colorful parade and performances that will definitely rock your world.

The basic dance imitates the bee in action with children buzzing around like bees in a hive. The town’s surname is also a monicker taken from the busy, social insect. 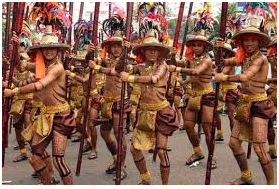 Pintados Festival has been with us for almost 30 years, 27th in 2013 to be exact. What’s amazing is this is actually a one-month festival that culminates in a Pintados Ritual Dance Presentation. Pintados means painted in local dialect as dancers are painted from head to toe with designs that resemble an armor to imitate the tattoed warrior of the ages. The celebration of dance and color is done in honor of the Señor Santo Niño de Leyte. 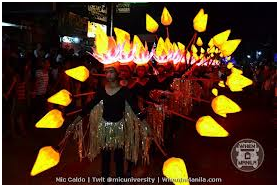 Revel in the the Dances of the Lights or in Spanish, Bailes de Luces, a festival that started way back in 1997. A festivity to celebrate the birth of the Savior Jesus Christ and the upcoming year, you’ll be floored by the dazzling designs and stunning display of lights dancing to a Latin beat. 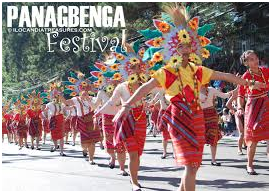 Panagbenga, a term of Malayo-Polynesian of origin meaning “season of blooming” is the Festival of the Flowers done as a tribute to the beautiful flowers of the region. The festival was held to encourage people to rise up from adversity after the devastating 1990 Luzon earthquake. In a way, it’s the Pinoy equivalent of the Rose Parade of Pasadena, California. 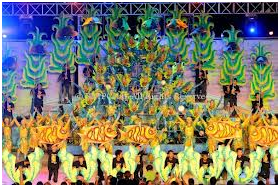 Pasigarbo sa Sugbo or Festivals of Festivals, is an annual competition of all the town and cities of Cebu island. Each will be representing the best of their places by showing a taste of their local fiestas. A festival that will surely put people in awe, Pasigarbo sa Sugbo has been a very popular crowd drawer with the whole of Cebu converging in a single host town or city. 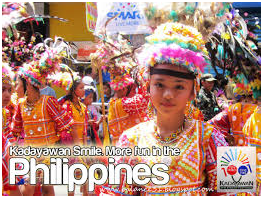 Kadayawan is an annual festival in the city of Davao celebrated as a thanksgiving for good harvest and blessings received. The name is itself rooted in the Davao term “madayaw” meaning good, superior or beautiful. Though it started way back, it was Mayor Duterte who named the festival “Kadayawans a Davaw” and showcase the rich cultures and the different ethnicities of the region. 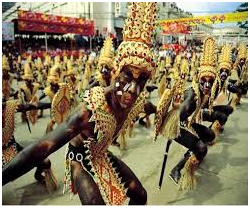 Originally a pagan festival, Ati-Atihan has transformed into another religious festival devoted to the beloved Señor Santo Niño in the island town of Kalibo, Aklan. The name Ati-Atihan means to “be like the Aetas” in reference to the aborigines who were the early settlers of the land. 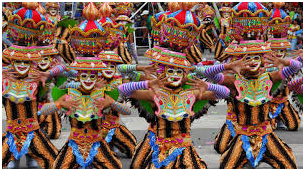 Started in 1980, the festival where dancers wear masks was conceptualized as a festival of smiles in deference to its origin city, Bacolod, also known as the City of Smiles. This is in answer to the relative period of economic crisis for the sugar-centered region during that time when the price of sugar worldwide plummeted. Also on that year, disaster befell many Negrenses as MV Don Juan sunk taking many lives including those from many prominent Bacolod families. 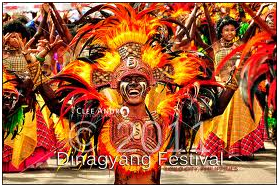 A religious as well as a cultural festival, the Dinagyang is another festivity dedicated to the newly-born savior, Señor Santo Niño. Following the footsteps of the Ati-Atihan, the humble devotion to the Child Jesus in 1967 blossomed into one of the most sought-after and awarded events in the country today. 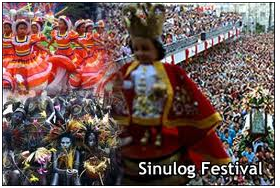 A festival for nine days, Sinulog has redefined feast-making in the Philippines with the sheer number of people participating and watching and the immensity of the whole practice. Imitated and envied, the festivity attracts millions of people to the city of Cebu, a true veneration to Señor Santo Niño, the original image of whom was brought by the Spaniards from Spain.

Once again, folks, our newest Top 10. For more of the nitty-gritty details, please dive here.

Then again, if you felt I have not exercised fairness in any way in this article, please drop me a piece of your mind in the comment section below. Exchange of ideas is one of the best methods to arrive at the truth. However slow and heated.

And do join us in spreading the love. Share this good news to your inner circle. Philippines may not be among the most developed nations on this planet, but it sure beats many worldwide in the fun department. Kampai!