We may not have the biggest of waves. Or the most in terms of number of nudist beaches. Blistering barnacles! None that I recall. (Though I surmise there is.) But our surfing spots are bound to give the best of the world a run for their money. 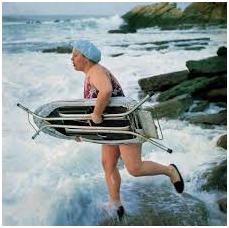 Yeah, you may be as skeptic as most Filipinos are. But that really does not surprise me. After all, most of us don’t put both our feet on the smoothened piece of long wood called a surfing board. Skating board, perhaps.But surfing board. Nah! That’s not really our cup of tea. Which does not mean we don’t fancy it. Surfing seem fun and truly, that iconic image of a man with washboard abs shooting through a giant wave on a surfboard like it was child’s play, is an unadulterated symbol of unbridled fun and adventure. If only surfing sites are but a walk away from where we live.

But, truth to tell, surfing sites are a-plenty in the Philippines. And moreover, they shine like pearls caught by the early morning sun. Here’s 10 of the Best. 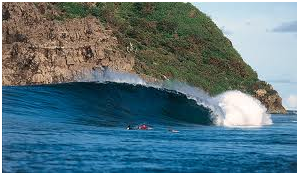 If you want fun barreling through Cloud 9 waves, it’s easy to conclude Puraran Beach fits to a T. Most especially true in the months of August and September. But if you are still starting up, April to June when swells are more tame. Don’t worry, Majestic Beach Resort can give you a lesson or two for a minimal fee.

Arriving: Fly Cebu Pacific from Manila to Virac. Then get to Baras via PUJ or PUB. Once there, you could either hop to a trike or ride a Gigamoto bus straight to Puraran. 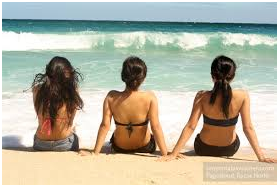 Located at North Luzon, this crescent-shaped cove is bound to catch your fancy with its calm, deep blue waters. Swells start coming in from October to April but serious waves will start to appear by July. Word of warning: get into proper attire or reef booties, as live corals could harm you just like that.

Arriving: Get to Laoag via PAL or Cebu Pacific. Once there, hop into a bus for Pagudpud. Then, take a 30-minute trike ride to Barangay Baloi where the famous cove is located. 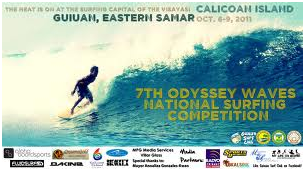 Both for its left and right-hand waves, many enthusiasts have found an irresistible offering in Guiuan. And the best thing’s you won’t be disappointed as the waves could reach up to triple overheaders in the months of April and November. Even in off-season the waves seldom go flat making the destination even more attractive.

Arriving: Fly to Tacloban via PAL, Zestair or Cebu Pacific. Once in the city, you can make the most of van companies (e.g., Van Vans, Duptours) to take you to Guiuan. If you’re just starting and want to be left alone or if you just dislike large crowds, Lanuza Bay can be perfect for you. With a perfect river mouth at your disposal, you’d be sharpening your skills in large tubes and swells. For months of November to March, you could be facing waves as large as the famous Cloud 9’s of Siargao.

Arriving: Direct flight via PAL or AirPhil Express. Once in the city, catch a van or a bus headed for Tandag and arrange to be dropped off Lanuza.

Famous for its Cloud 9 waves, those waves that have large crests with thick hollow tubes that surf enthusiasts love to zoom through, Siargao is hard to disappoint you. Best bet: August to November. If you want to test your skills, try December to April when the winds are extra strong. The site is so sought-after it has been a regular spot for international competitions.

Arriving: You can take Cebu Pacific flights which pass via Cebu or via direct Siargao through PAL. 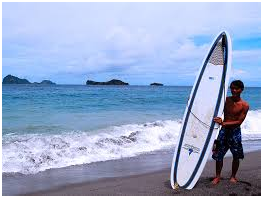 For residents in Metro Manila this could be another best bet for a generous amount of surfing to happen. With plenty of surf breaks and swells that are relatively consistent, you’d be dancing on our surfboard in no time. Best months are from May to December with the largest waves arriving from December to April. To note, you could also reach the islands of Anawangin, Camara, Nagsasa and Capones via boat.

Arriving: Catch Victory Liner as it travels to Iba, Zambales regularly on an hourly basis. Arrange ahead with the conductor. 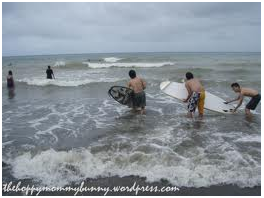 This could be your safest bet to get a surfing spot near the Manila metropolis. You can easily get stoked as many surfers flock to the scene on weekends.
If you want to take some serious lessons, you may want to get in touch with Philippine Surfing Academy (PSA). They offer surfing packages on Saturdays and Sundays which could comprise of a round-trip transportation. Caution: A few meters and the river meets the Pacific Ocean.

Arriving: For weekend packages, get in touch with PSA at 0917-894-6767. To get there, catch Raymond Transit buses at Cubao or Sampaloc, Manila. 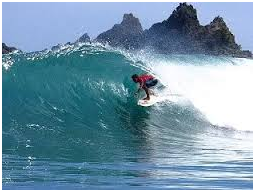 You get a chance to surf all day as the beach guarantees you get glassy waves through and through. Peak season is October to February but many newbies visit when April comes and improve their wares to join the annual Beginner’s Surf Competition. If you’re into adventure and has honed your skills you may want to try Cementro or Cobra Reef with waves that could go as high as 14 feet.

Arriving: From Manila, take the Genesis Joy Bus that goes to Baler. You may also contact their station at 02-7090544 to 45 for more details. 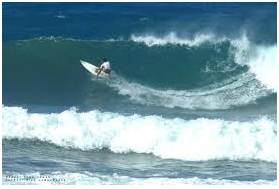 You don’t just have a surfing destination, this place is teeming with annual surf clinics for you to learn the ropes fo the sport. You can get as high as 10-foot waves or manage with a 3-foot if you’re a beginner. The good thing is the north swells last long from November to March and the south swells from July to October.

Arriving: From Manila, catch any of these buses: Laoag, Vigan, Abra or Ilocos Sur. Arrange to be dropped off at Urbiztondo, San Juan, La Union. Catch a trike to get you to a 15-minute ride to Urbiztondo. If you want to make sure, get in touch with Billabong Surf School. For what it offers, Dahican Beach is heaven-sent. If you’re a true enthusiast you’d be spending forever in Dahican Beach. Especially true in the months of September to March where swells could reach as high as 15 feet. With super-fine white sand, you get yourself seven-kilometer of beach and seven kilometers of uninterrupted fun in the sun.

Arriving: From Davao City, catch a bus from Davao’s Overland Transport Terminal or ride a van to Mati from Victoria Plaza or G-Mall. To get to AmihansaDahican, you can hire a habalhabal or go the tricycle way.

For another look at the details please visit here.