Popping the question can certainly separate the men from the boys. Good thing these celebrities did it with style everybody is left wide-eyed and ecstatic. 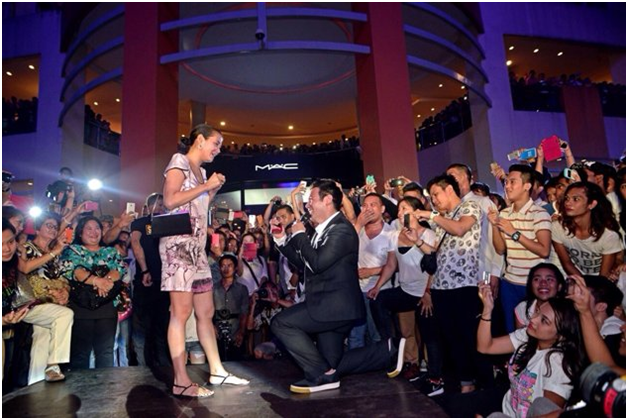 For most, if not all, women, the proposal has got to be the ultimate game-changer. Where many who have gone past their best years watch in envy of such a fairy-tale twist to an otherwise mundane relationship. The proposal is the gentlemanly way of doing it. Needless to say, millions of Filipinos have done away with it altogether. Finding the event another hole-maker in their thinning wallets. Instead, many do not make such a dramatic flourish of a proposal and go straight to booking the wedding. Or booking the soon-to-be bride in the four corners of a lover’s bed.

Fine ladies and honorable gentlemen of the hour, the top 10 of Most Amazing Celebrity Marriage Proposals in Planet Philippines: 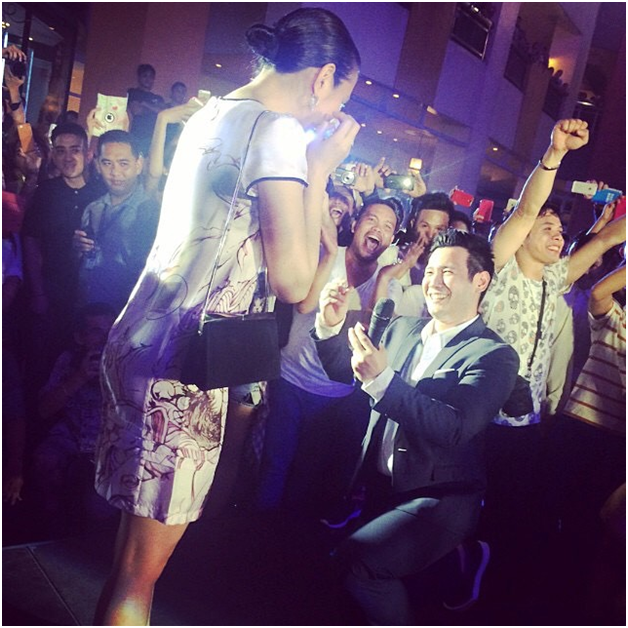 Not to be left behind by his ex-flame Heart, John does his own unforgettable version of booking a wedding partner. And this may not be an easy one as it involved a 300-member dance crew.

MECHANICS: So girl Isabel Oli gets the surprise of her life. She was invited to do some malling in Eastwood City with John’s sister, Camille Pratts. To her surprise, everyone in the mall started dancing.

All of a sudden, John Pratts appeared with all the suit and the ring and before Isabel can say no John is on his knees.

It seems John did a lot of preparation as Isabel’s family and closest friends were also there.

And to add glitter to the memory, John have Nice Print photography to cover the event. He had 3 months to make it happen.

Degree of Difficulty: Challenging, imagine all the people involved
Date: September 24, 2014
Results: For the books 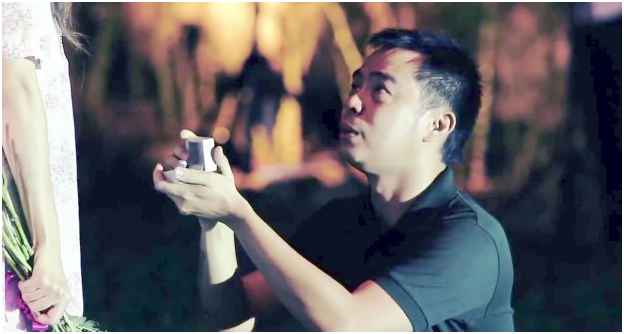 Now here’s how a famous band frontman does his proposal. And what best to do it than in a music video.
MECHANICS: Chito asked Neri to start in a friend’s music video. Shot by Nice Print (same outfit as John Pratts’) the video shows how extensively the vocalist had all his attention to detail, from the set design to Neri’s prairie girl outfit.

And Neri went for it hook, line and sinker and even with all the cameras around was completely unaware of what is to happen until a written message appeared on the projector. And as if on cueChito came with all the flowers, subsequently going down on one knee to a crying future Ms. Miranda.

This time we’re sure the video that came out is wholesome.

Degree of Difficulty: Challenging, considering all the preparation
Date: May 2014
Results: For the books 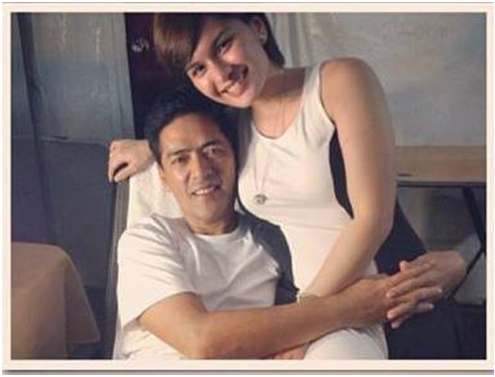 Well, this couple have been the talk of the town. Online netizens read the news that says the famous 59-year-old comedian has proposed to the 24-year old beautiful actress.

But this one did not come out right as planned, according to the story. It is said Pauleen seems not ready to settle as she turned down the proposal. But there’s still 2015 and who knows? Jericho spent 4 moths planning this wedding proposal. And it nearly got sideswept as church authorizes involved did not think it appropriate it on a Sunday.

MECHANICS: It was the birthday of beau Kim Jones and everybody that mattered in Jericho Rosales life was at the New Life Christian Center at Alabang – in a Sunday service.

Jericho had asked the pastor to make the wedding proposal happen but at first the church leader was hesitant for it was a solemn service. However, at the end of all the praying, Jericho was called to the front to express “his brand of unli love”. And with Jericho taking the stage, everything flowed from there. You’d expect running coach Rio, the bro with the coolest ‘fro, to make a mark in the wedding proposal department. It seems he doesn’t want to run solo in the race of life anymore. And yes, he did hit the bull’s eye, enlisting among many other things the girl’s fave band to perform live.

MECHANICS: Rio tells his girl Nicole that they’re going to do an MTV shoot. On the day itself, girl seemed apprehensive, asking too many questions. Boarding a jeep, Nicole starts to feel something is off finding many of her friends inside.

To make matters all the more complicated, Nicole’s fave band Up Dharma Down also boards the PUJ. Nicole, a 25-year-old long board racer and a known surfer babe was on the verge of tears but kept things to herself.
Everything start to be clearer when the jeep reached the UP Oblation where they all went down. 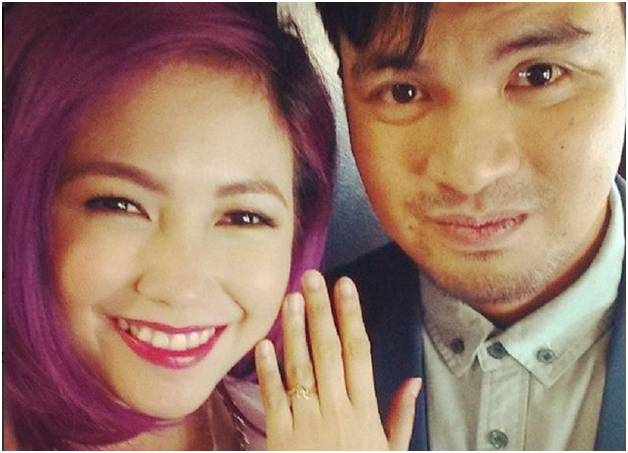 How do you propose to a famous songstress? This guy had to do it and inspite of all the hesitations landed one that booked him the love of his life.

MECHANICS: The couple watched “Rak of Aegis” and Yeng, not knowing that her BF was ready to pop the question anytime asked Yan to go to a coffee shop with her. For his part, Yan brought the beautiful singing diva to the place where they first dated. Though Yam felt weak on his knees and had to force himself to kneel before Yeng, he knew he had to do it as according to him: “hindikona kaya to live another day nahindikonasasabisakanya”.

Yan, vocalist of the band Indios, gave the ring given to him by his mother.

The couple has since flown to Singapore for their pre-nup pictorials.

Degree of Difficulty: Quite challenging
Date: March 2014
Results: For the books 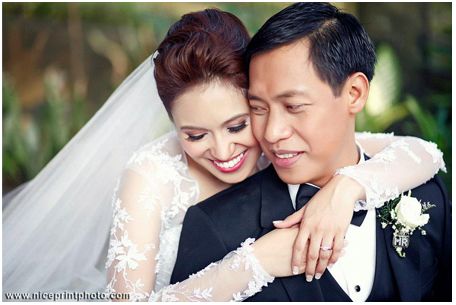 How about famous TV anchors? Yes, RaffyTima and Mariz Umali of GMA station. Ring a bell?
It is said that sometimes the person you end up for the rest of your life was that someone you were with all along. Here’s how veteran news TV anchors got to the wedding aisle.

MECHANICS: Lady Mariz is a big fan of teleseryeAmaya, a soap in GMA TV starring Marian Rivera. And so prince charming RaffyTima pull all the stops asking lovely Marian and her co-cast members to help him propose via a video.
A friend of Raffy, Lhar Santiago asks Mariz that he has an advanced video copy of the ending of Amaya. Of course, it was just the opener. After the video was shown, you have a RaffyTima on his knees doing his wedding proposal.

Degree of Difficulty: quite a challenge
Date: January 2012
Results: Happily Married Ever After 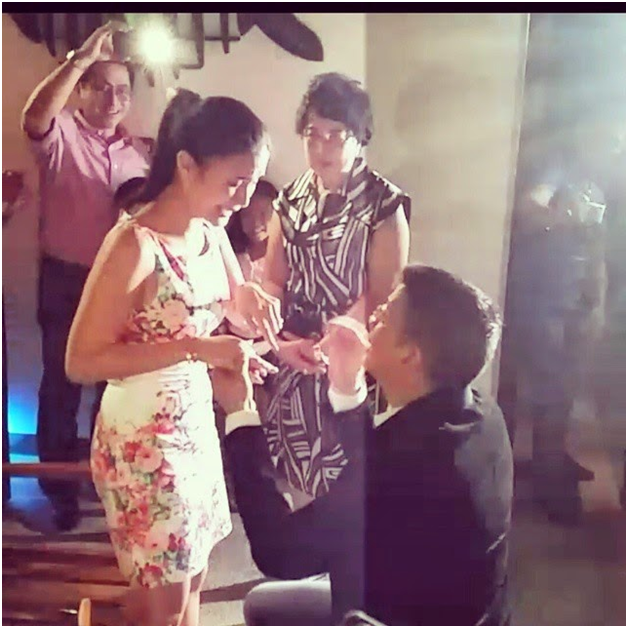 How does a senator do it to one of the most beautiful faces in the Philippines? Well, with class and proper preparation.

MECHANICS: It was a long weekend so the couple flew to Sorsogon, Heart’s province “under the guise of vacation”. And lovely lady has her friends over too but without her knowledge her closest friends (e.g., Alessandra da Rossi, Lovi (Poe), Roco (Nacino) came.

On Saturday, at around 8pm just before dinner, a friend of Heart led her to a place in the dinner area where her “surprise” friends were waiting.

While the music was playing, dear senator emerges and approaching the actress, read a letter from Heart’s father congratulating her for the engagement. By this time, dear lady is already all-tears. Escudero then asked his son who was around to take out the ring and bingo.

Degree of Difficulty: still a challenge even if dear senator has all the staff
Date: August 23, 2014
Results: Set for the books GMA showbiz royalty gets to go a step closer to the wedding bells. After 5 years in their relationship, Dingdong Dantes gets serious. It’s definitely a showstopper knowing the people involved are royal bloods of the highest kind.
MECHANICS: It was GMA 7 dance show “Marian” hosted by dear lady. In the middle of the show during the actress birthday celebration as her birthday was just days after, the couple took the stage. After a video in Macau in 2012 was shown (where Dingdong first proposed), GMA 7’s most bankable leading man took out a ring, folded his knees and said his piece in front of everybody present and the nation watching.

That was his birthday gift for Marian.

Degree of Difficulty: Not that hard since they’re both stars
Date: August 9, 2014
Results: For the Books 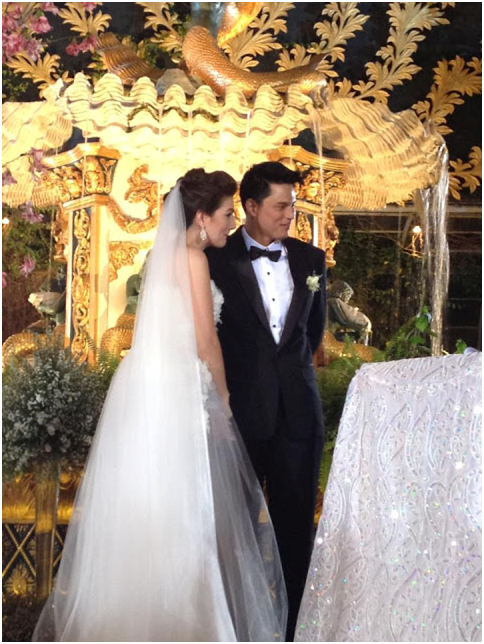 This has got to be the sweetest wedding proposal yet. Not only did it leave the bride-to-be totally clueless, she got the surprise of a lifetime.
MECHANICS: Zoren had to have a lot of people involved in this. First, he made it appear that the whole family, Carmina with their two kids and Zoren are invited to a commercial shoot for Selecta.

The shoot was for a wedding scene so they were dressed for the event. Things start to shake up when they started rehearsing the dance for the shoot. Zoren ended up having and argument with the choreographer as he was giving Maverick, Zoren’s son, effeminate dance steps. Then obviously angered, Zoren challenges the choreographer to a fistfight and as the two take their heated heads into action outside Carmina had to follow suit.

But the moment Carmina went out it seemed another world for everybody was dancing. Afterwhich, Zoren came out and proposed to her. After the yes (how can she say no), more dancing followed.

And the best part is…. They got married right then and there. Wow! Top that.

Degree of Difficulty: Really Hard considering all the people involved.

So, take a breather everyone! That was certainly quite a walk in the park. Send us your notes. Which proposal appeals to you most via the comments section below? Is it the without-prep-just-wedding-ring and kneel simplistic style or the one with all the 300-people ensemble.

Also please find for your easy-sharing the quick share buttons provided. Love certainly moves in mysterious ways.
I just wonder how many of these couples will last the test of time. Wanna bet?