BEST OF THE BEST SLAM DUNKS IN NBA HISTORY EVER 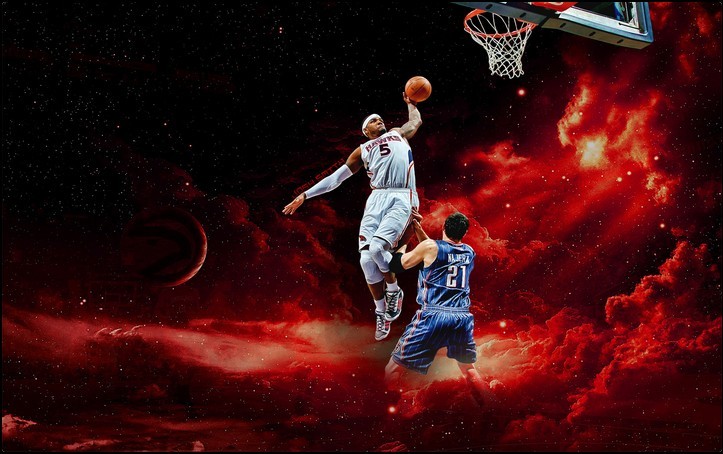 It’s NBA’s most dazzling week once again, the All-Star happening at Brooklyn New York. And all the gimmickry and high-flying stunts will be on display. The best of the best that these super-athletes can offer. Too bad John Wall not be defending his crown in the Sprite Slam Dunk. And too bad Kevin Durant is not in the Eastern First Fives.

There is no event as awesome, however, and as magical as the Sprite Slam Dunk. And well, you could be asking and every Pinoy deserves to know who shone brightest when it all the acrobatic skills are laid against each other. Who has made his mark in the All Star Slam Dunk.

Hear ye! Hear ye! Here are 10 of the best acrobatic high-flyers in the history of the NBA. Everyone here won – except for Andre who we all know was robbed of the trophy. 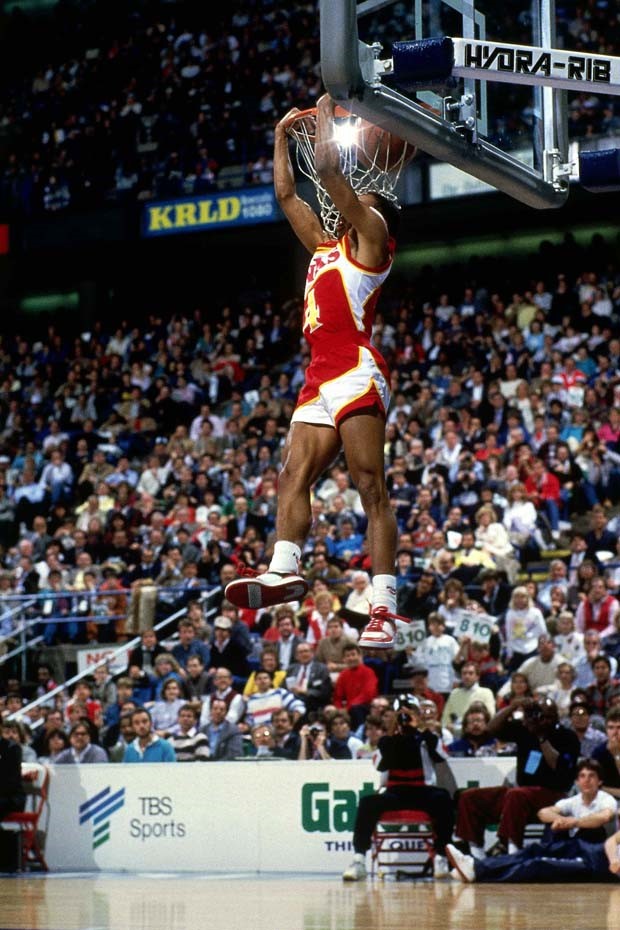 Circa 1986. The odds were stacked against Spud Webb. He was 5-foot-7 tall going against a 6-foot-8 high-flyer Dominique Wilkins. Many thought it was a done deal as Dominique is known for his acrobatic acts in slam dunk earning him the moniker The Human Highlight Film. Still at the end of the day the Mighty Mouse would come out the winner outperforming and outsmarting his over a-ruler-taller rival.

The act that put the nail to the coffin: The Mighty Mouse bounces the rock, in an instant flies through the air, high up just in time to grab the ball finishing with a nasty reverse slam. The crowd went wild.

#9: Andre Iguodala’s Behind the Back Clincher Here’s a comeback kid that went for the win. In his only time ever to participate in the event, Andre may have been robbed of the slam dunk crown way in 2006 falling to the magic of the tiny yet electric Nate Robinson. His phenomenal display of dunking prowess lit the crowd up. Not to be denied, his left-to-right, behind-the-back move stunned the audience leaving the judges awestruck.

Bouncing the ball, he then cradled it in using his left hand then bringing it around his back he flushed it in his right hand before he swooshed the ball into the rim. Everybody was speechless.

However, no matter the sheer difficulty of the dunk, Nate won the dunk in what many – including Allen Iverson – consider a robbery in NBA. Andre would never ever participate in the contest and would not put his opinion forward about the fiasco until 2006 when confirms he “was robbed”. 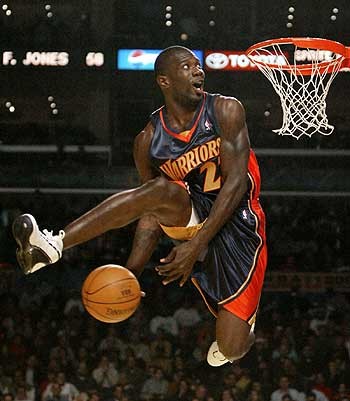 No doubt, Jason Richardson is a master of the slam dunk winning the contest back to back and always leaving the crowd electrified. All in all his extraordinary athleticism and fiery moves have been phenomenal.

In this stellar move he catches the ball mid-air and of all things puts the round object between his feet, slamming it through the hoop and lighting the crowd up with crazy authority. Great move to improvise on what many considers a classic.

He joins Michael Jordan and Nate Robinson as the few who won the slam dunk contest back to back.

#7: Vince Carter Puts One Through His Legs 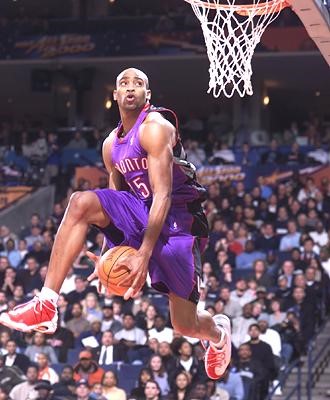 For all his inventiveness, Vince Carter is what many may call a slam dunk royalty. His moves are etched with purpose and he never fails to captivate the hearts of the audience. But none may have given so much joy to so many people than his performance in the year 2000.

In his iconic act, Vince manages to catch the ball mid-air putting it right in between his legs and finishing off with a vicious slam. It’s clearly Vin-sanity at its most flagrant display. Even his best bud and teammate Tracy McGrady who helped by throwing the bounce pass ended up speechless at the amazing display of athleticism. The crowd went wild and his rivals on the contest should have gone home as clearly his “it’s over” signal was a warning of the nasty things to come. 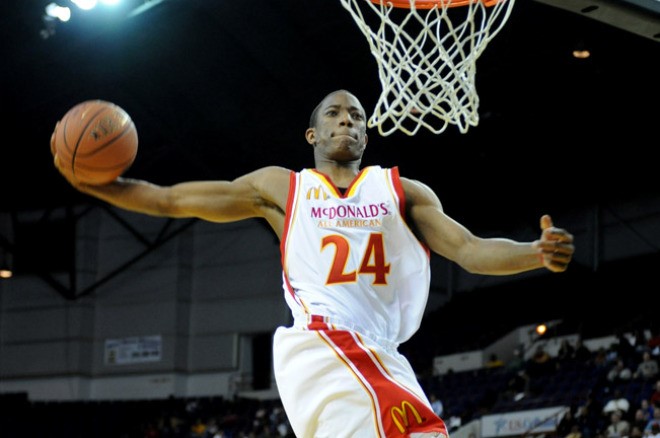 DeMar DeRozan of the Toronto Raptors just raised the bar in the dunk industry. His act was just absolutely awesome.

His amazing style: He throws the ball towards the rim, runs for it and catches it mid-air. However, he does not dunk it immediately. Instead he positions himself beneath the rim fluidly before throwing it down in reverse. Perfect! 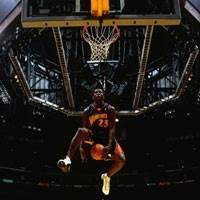 Jason Richardson, truly a slam dunk king, has so many tricks up his sleeves choosing his most electrifying dunk ever is no easy task. However, this piece in 2003 could be his finest yet.

What he did: He starts from the baseline and throws the ball catching it mid-air. He then proceeds to put it backward between his legs, finishing off with a reverse using his left hand. So acrobatic, this move won him the contest in 2003. 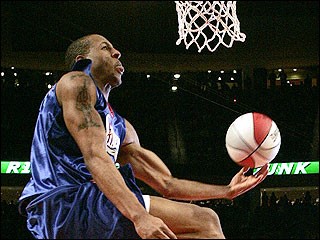 For all his display of dunking prowess, Iggy should have won the contest in 2006. This move is so damn hard, attempting it alone is bound to be a challenge it itself. What makes it real hard is you could actually hit your head to the backboard. But AI manages to pull it off.

He gets the help from the famous (and notorious) Allen Iverson (a standout act given the fact) who lobbed the ball off the back of the glass. Iggy catches it and soars right under the basket slamming it with the right hand in the process. That should have won the contest. People knew. The judges hesitated. 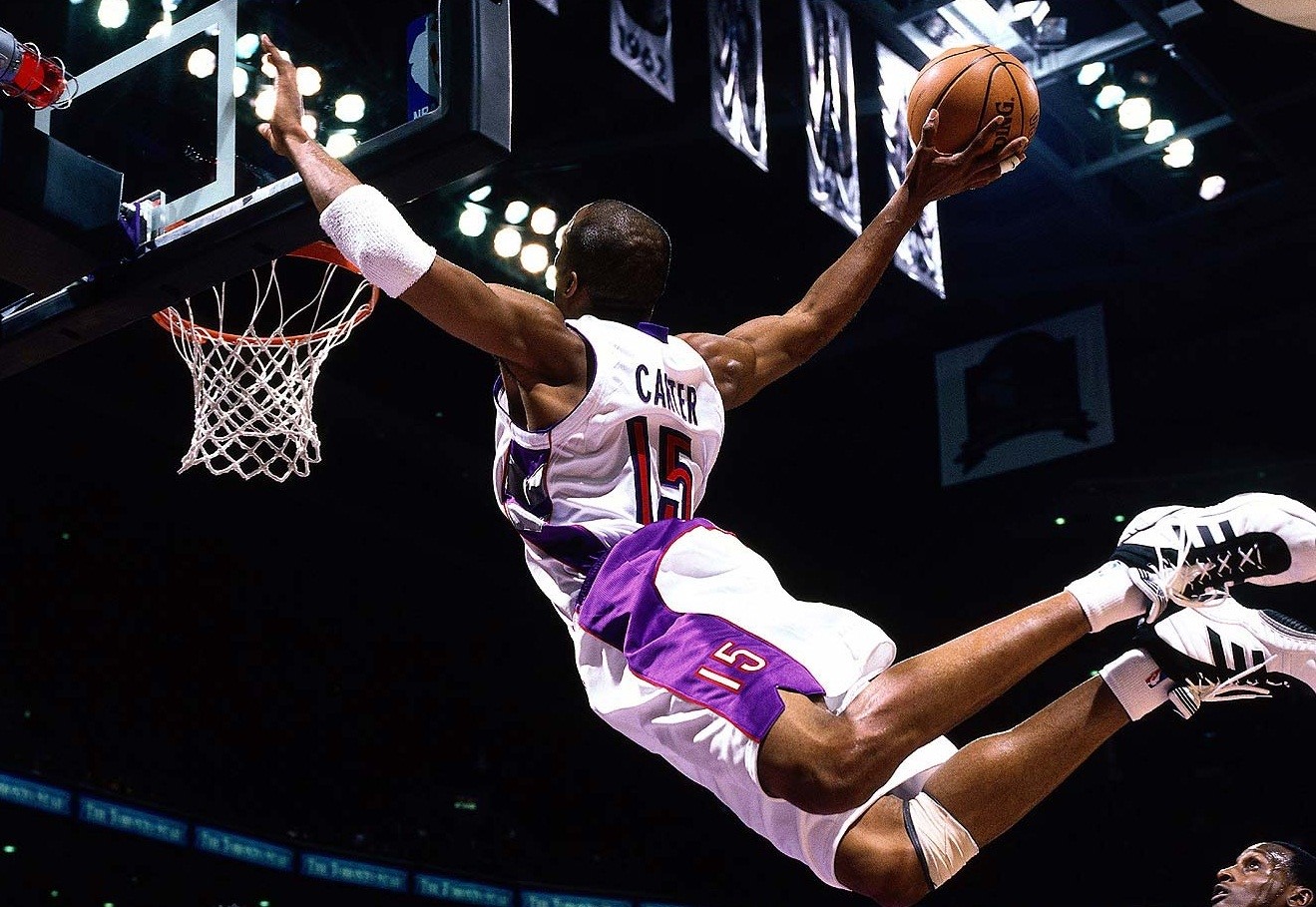 The year 2000 could be remembered as Vince Carter year. This is the season Vince was at his most formidable fleshing out dunks that has made him a legend.

This dunk had Carter jump so high it is said he hung by the rim via his forearm. It only show how much power and explosiveness the Toronto Raptors star had. So difficult is the act, perhaps there will never be anybody who can replicate it.

#2: Michael Jordan Shows How It’s Done from the Free-throw Line 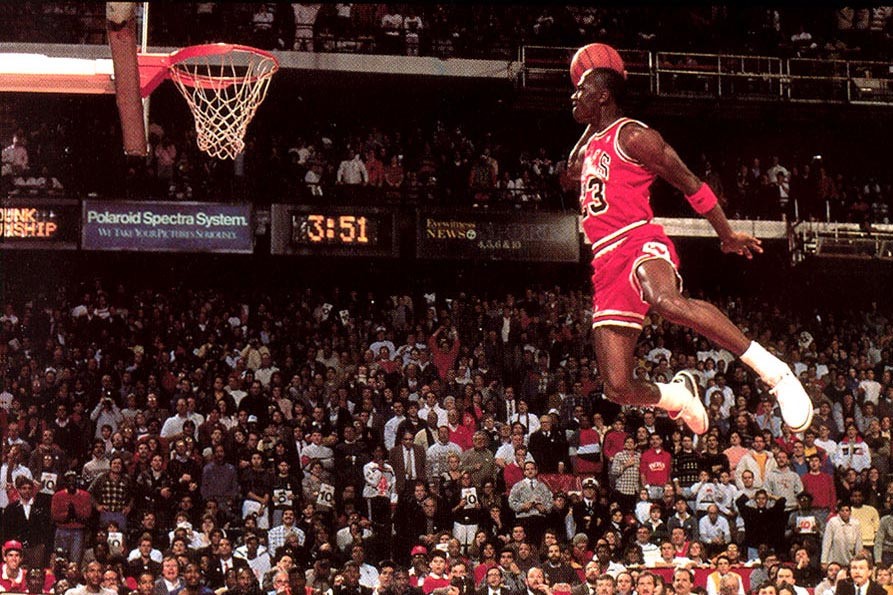 It may have been done before, but nobody yes nobody does it like Mike. This act has been multiplied in millions of posters worldwide. The Air Jordan symbol.

He showcases a double-clutch dunk from the free-throw line so powerful it’s just plain breathtaking. Of course, for his acts he has amassed a back-to-back championships in slam dunk adding more brilliance to his superstar status. 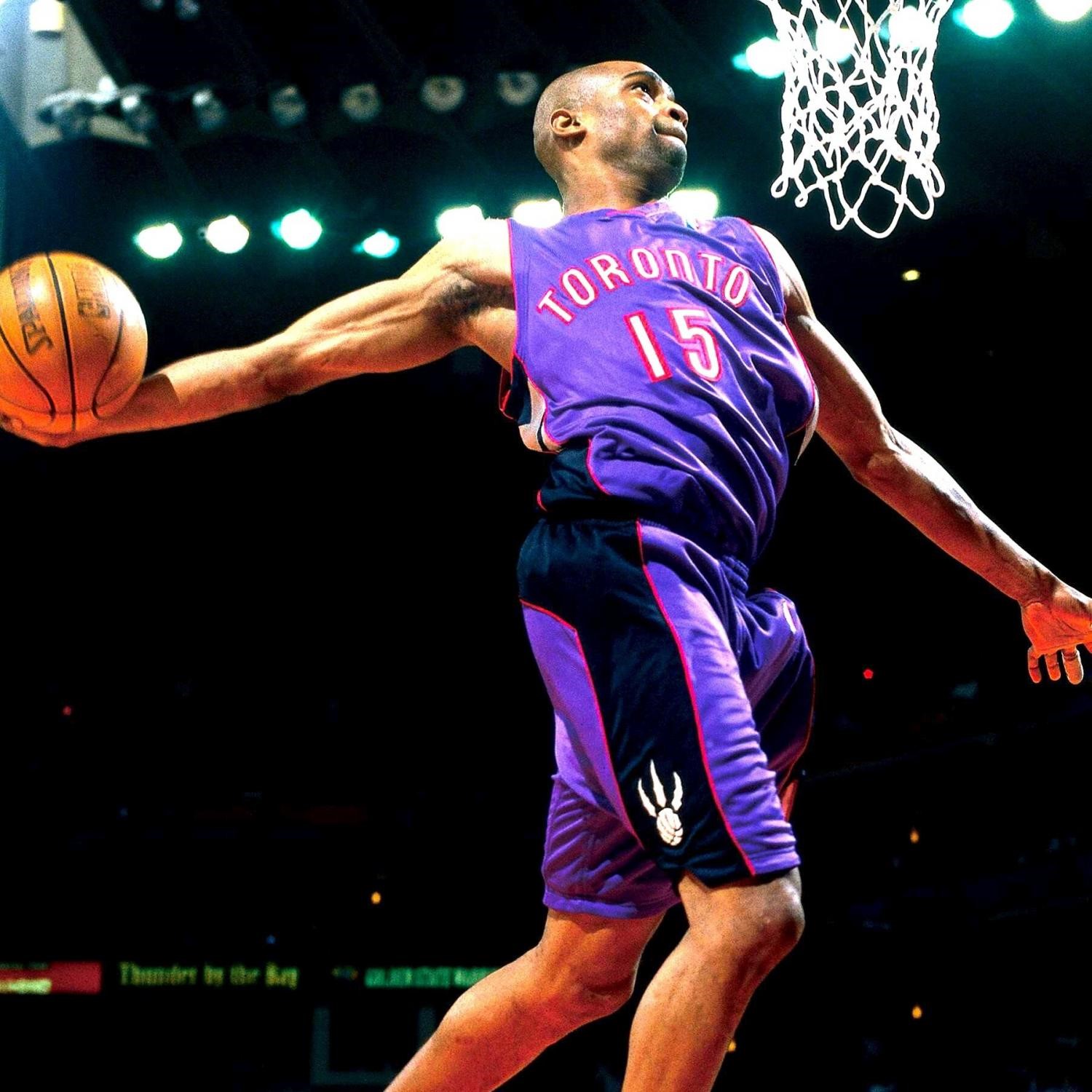 This is the dunk that introduced Vince Carter as Slam Dunk King. So nasty is the act everyone in the building was on their toes for more.

And people who watched him only had one question in mind: How the hell was he able to do that? As people said in his clip,
“This is a reverse-360 going against the grain.” Credit it to his above-average strength and athleticism. This is the dunk that raised the bar.

Please find the Comments Section below handy for a piece of your mind. No, whatever it is it’s OK. Some could be against what you’re about to write but no worries as it’s exactly why we want to hear from you. And yes, do your social media a favor by sharing the story using the Quick Share buttons.