At least 15 people were killed and 18 remained missing on Aug. 24 after Typhoon Goni dumped heavy rains over the course of three days in the northern part of the Philippines. 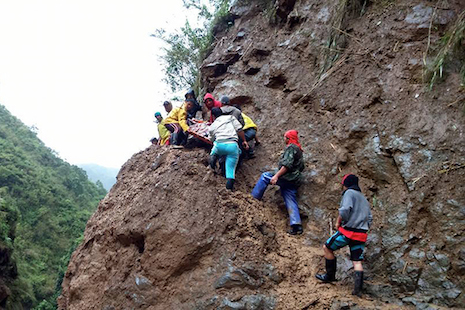 Retrieval and rescue operations continued Aug. 24 in the northern Philippine province of Benguet, where at least 15 people were reported killed and 18 others missing due to Typhoon Goni. (Photo by Dave Leprozo Jr.)

Authorities said at least 12 people were killed in landslides in the province of Benguet alone while search and rescue operations continued for 18 miners who were buried in a massive landslide in the town of Mankayan early on Aug. 23. Another three were killed elsewhere in the north.

“We continue to hope that we will find survivors,” said Gov. Nestor Fongwan of Benguet on Aug. 24.

Although big mining operations in Mankayan stopped in the 1980s, small-scale miners continue to operate in the area while illegal logging is also rampant, rendering portions of the mountainside susceptible to erosion and landslides.

An estimated 13,000 families, or about 78,000 people, were forced to evacuate, according to the National Disaster Risk Reduction and Management Council.

Alexander Pama, the council’s executive director, said the damage to agriculture and infrastructure thus far was an estimated US$2.7 million.

At least 197 houses were reported destroyed.

As of the morning of Aug. 24, northern Philippines has been experiencing cloudy skies, moderate rains and isolated thunderstorms.

Communication and power supplies have been restored except in some isolated towns. At least 15 national roads were still closed to traffic while road-clearing operations were ongoing.

Typhoon Goni, called Ineng locally, was the ninth of about 20 storms and typhoons expected to hit the Philippines this year.

Typhoon Haiyan, one of the strongest storms on record to hit land, devastated large areas of the central Philippines in November 2013, leaving more than 7,500 people dead and thousands missing.