Common Modes of Transportation in the Philippines

Finding your way in and out of a place is critical for a safer, more enjoyable trip. In the Philippines, there is an array of transportation, auspicious or otherwise, for every traveler to experience. At times, that not-so-pleasant ride is the only way to get to your destination, so instead of whining, it’s best to exercise your optimism and make the most of the journey. 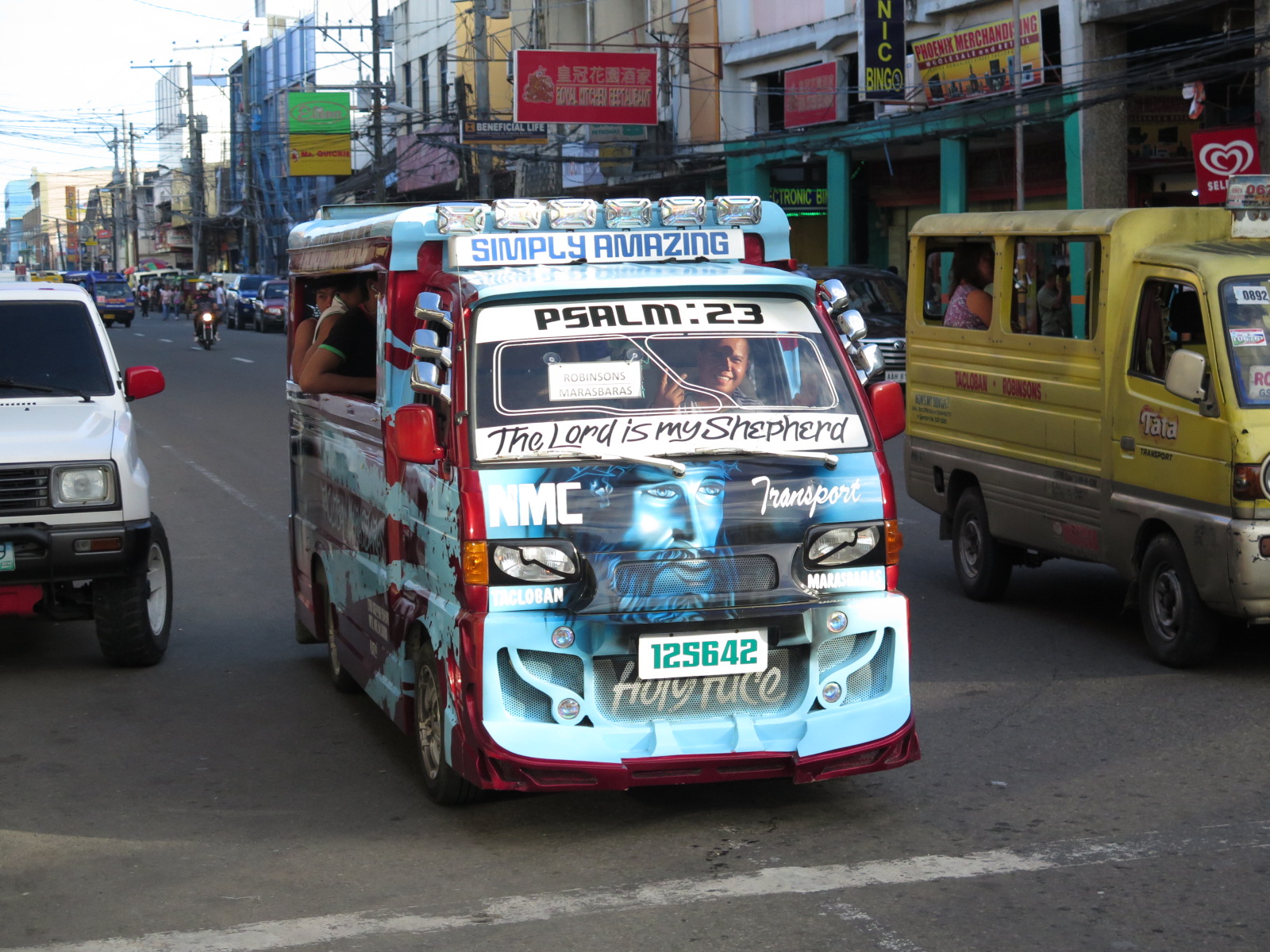 The colorful, iconic jeepney is the hallmark of Philippine transportation. Every foreign traveler should at least try a jeepney ride and experience how it feels to ride a sometimes cramped, open-window transport where passengers pass around fare or change to and from the driver, and say either “Bayad Po” (here’s the fare) and “Para Po” (please pull over). The multicab is a smaller version of the standard jeepney, but has the same function. It can get awfully confined inside a multicab, especially for taller, bigger passengers. 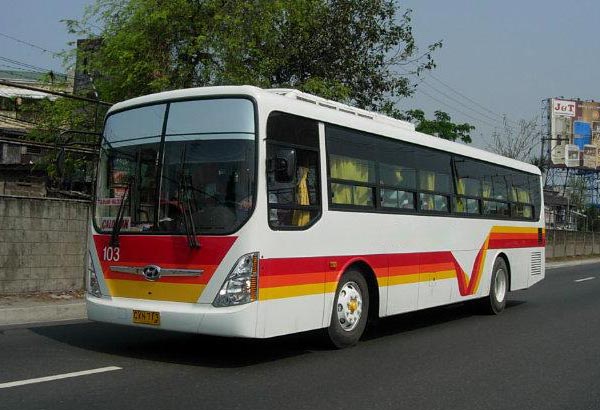 Buses ply longer routes from the city to the countryside and distant provinces. It’s the main mode of transport for land trips that last an hour to several hours, or overnight. There are specific terminals and unloading/loading spots for buses. Bus fleets are relatively more comfortable than jeepneys, although some don’t have air conditioning and can be quite crowded on peak season. Taxis normally roam around the city streets, picking up or unloading passengers within the city limits. It’s possible to hire a taxi beyond its route but drivers usually charge extra for the longer trip. Airport taxis specifically serve airport-bound or newly arrived airplane passengers. Standard taxi rate as of late is Php40.00 plug down and Php2.50 incremental fee.

All three railway systems in the country operate around Metro Manila: the Manila Light Rail Transit System (LRT 1 & 2), Manila Metro Rail Transit System (MRT), and the Philippine National Railways (PNR). PNR’s services to the Bicol Region are currently suspended. LRT and PNR are government-owned and operated by the Department of Transportation and Communications (DOTC). MRT is private-owned but co-operated with DOTC.

#5 Vans for Hire or V-Hires 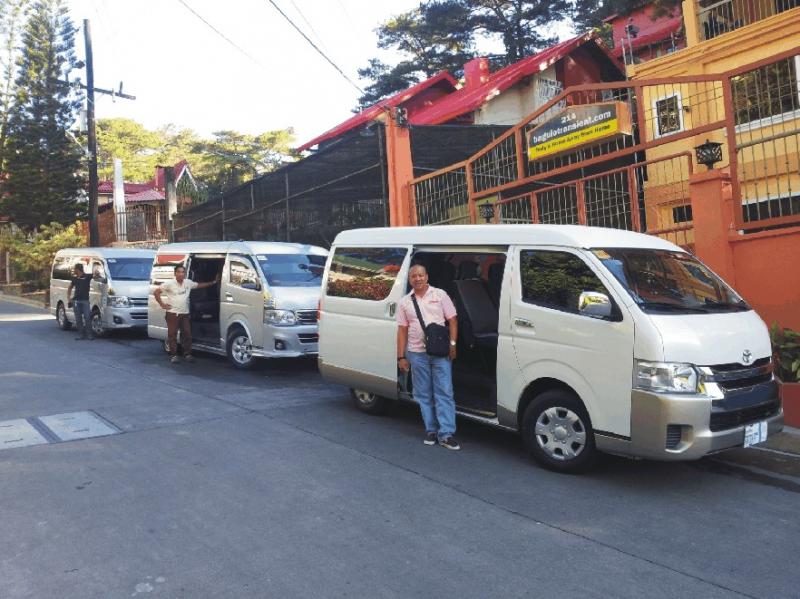 In provincial areas not served or partially served by bus liners, you can ride vans for hire for a fixed rate. These v-hires are parked in specific terminals that are sometimes found inside mall premises. Although they have air conditioning, some v-hires are old and horribly maintained, making the ride somewhat uncomfortable. 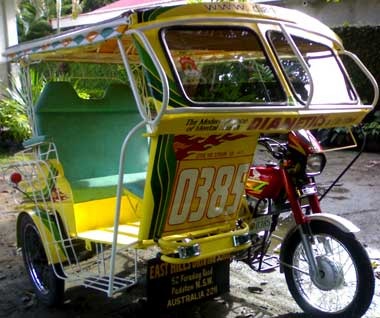 These modes of transport come in a variety of designs. Some have sidecar with three wheels (standard tricycle) while others are fitted with jeepney-like chassis and have four wheels (motorela). Tricycles and motorelas are as colorful as passenger jeepneys. They serve very limited routes and are often restricted from servicing busy cities. 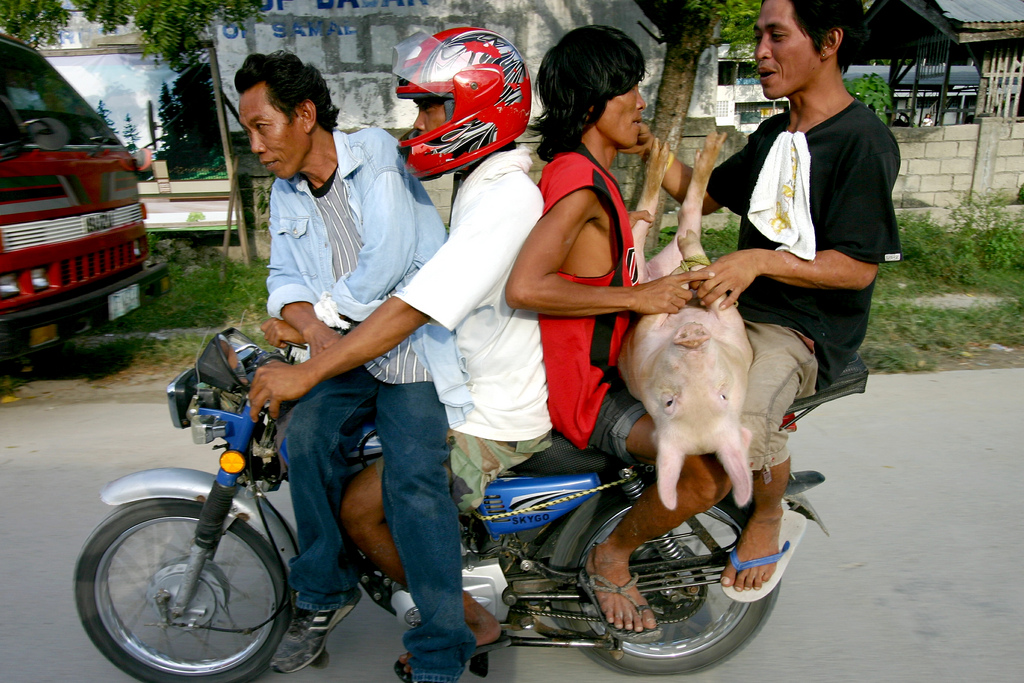 The roads leading to the hinterlands and mountain barangays in the Philippines are very steep or aren’t paved at all. Generally, the only means of transportation to these areas are motorcycle taxis or habal-habal. It’s a relatively unsafe way to travel because habal-habals may carry more than two passengers at a time, excluding the driver. Some habal-habals are fitted with a lateral plank (skylab) for it to accommodate more passengers.

#8 Bicycles with Sidecar (Pedicab or Trisikad) 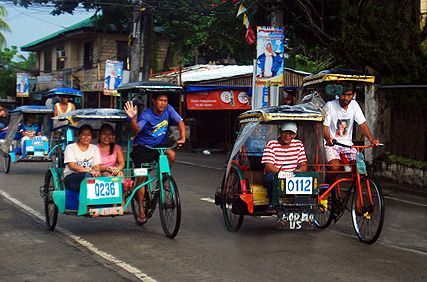 Pedicabs or trisikads are non-motorized versions of the tricycle or motorela. The driver pedals the bicycle fitted with a sidecar to bring or fetch passengers within a small area. Because they don’t produce noise, they’re preferred transport options around upscale residential areas. 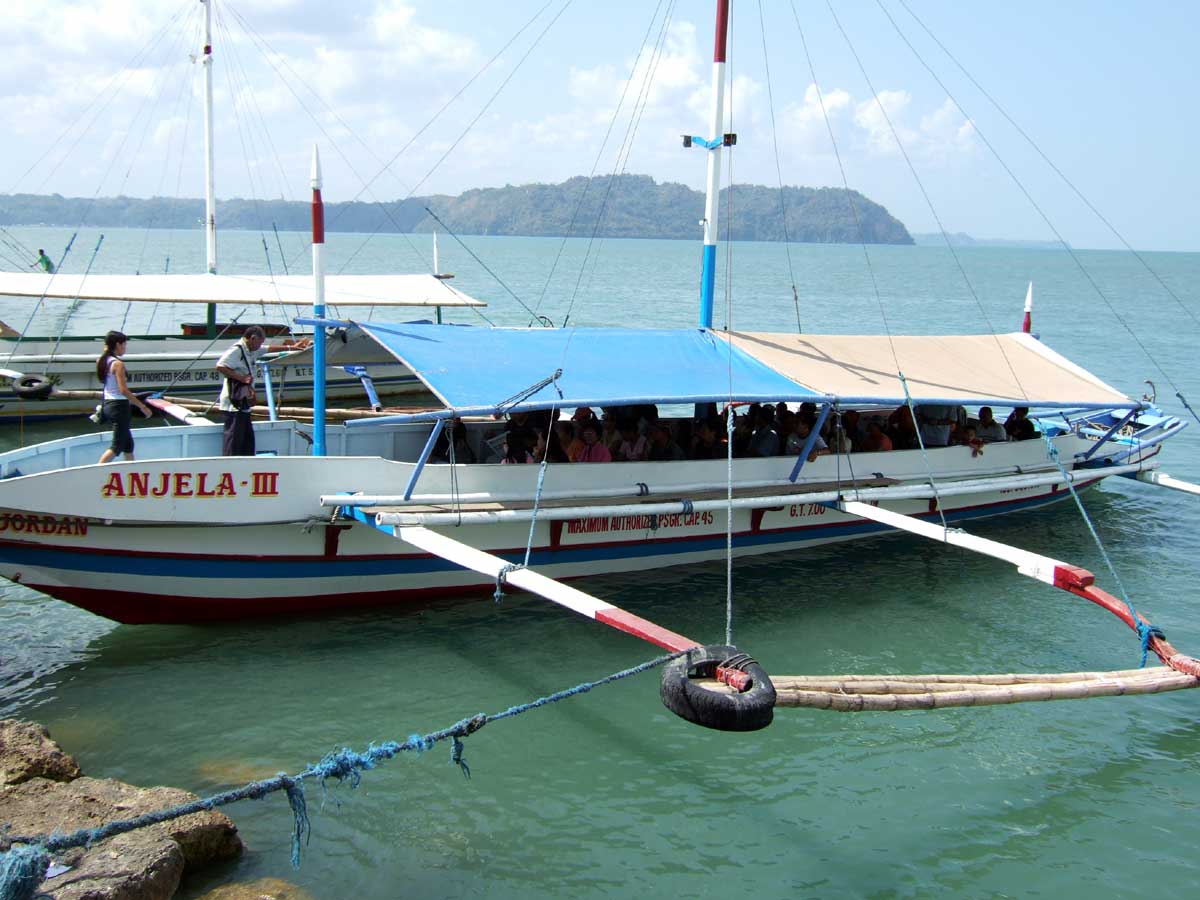 The costlier but faster way to visit the different islands of the Philippines is via airplane. There are more than 10 international airports, more than 30 principal domestic airports in the country, and a good number of community airports and unclassified airstrips across the Philippines for public transportation.

Aside from the ones listed here, the Philippines also has some of the most peculiar means of travel such as the “palayon” or wooden scooter in Banaue, “pasayad” or carabao-pulled cart, “kalesa” or horse carriage, “kuliglig” or hand tractor ride, and the “riles kariton” or railroad trolley.

Fancy riding any one of these modes of transportation? Share with us your experience or expectation about the different rides the country.