Batirol, Lusong, Etc. – Crude Household Materials We Used Some 20 or So Years Ago

Linusak or nilupak na saging (pounded boiled bananas in sugar and grated coconuts) is a yummy treat, a typical Filipino dish we enjoy so much. But did you know they were traditionally created in a wooden mortar and pestle (lusong and alho in Bisaya, respectively)? And yes, the traditional sikulate or hot tableya drink was concocted inside a cast iron pot and a stirring stick called batirol, which is now made popular by Baguio’s Chocolate De Batirol.

It’s interesting to learn that we were able to make do with some of the most basic and unsophisticated equipment and live simply yet happily back then. And so, I want to share with you ten of these amazingly crude, but brilliant inventions of long ago that serve as testament of how we Pinoys have changed so much over the course of a few decades. 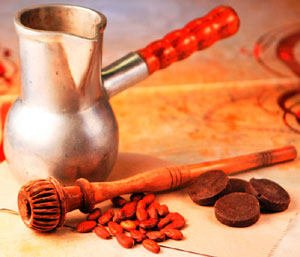 Batirol is a wooden whisk with a rounded and grooved head used together with the tsokolatera, a cast iron pot to make traditional sikulate. The constant shaking motion of the batirol makes the hot chocolate drink richer and creamier, while the tsokolatera helps keep the drink hot. My family used to have a small tsokolatera and a 10-inch batirol back when I was in grade school.

NOTE: In the Visayas, the there is a discrepancy in the terms. The wooden stirring instrument is called batirol and the cast iron pot/pitcher is called “borneo” or “borniyo”. Lusong is a wooden mortar shaped by burning coal on the center of a tree trunk and then scooping out the burned parts and smoothing out the receptacle with a chisel or sandpaper. Alho is the pestle, also made of wood usually from a long and straight branch or trunk of a tree. These two work in tandem. Our lusong was cutout from a mahogany trunk and the alho was from a guava branch.

A farming household would usually have one or two huge lusongs where they grind newly harvested rice to separate the husk and the grain. To make the work faster, two strong men or women each armed with an alho would alternately pound on the grains. On some occasions, the women would boil saba bananas, grate coconut using the traditional kudkuran sa lubi de kabayo (see #6), and pound these two main ingredients together with a dash of sugar to make the tasty nilupak. Lusong and alho is also used to grind roasted beans of coffee or cacao to separate the shells. 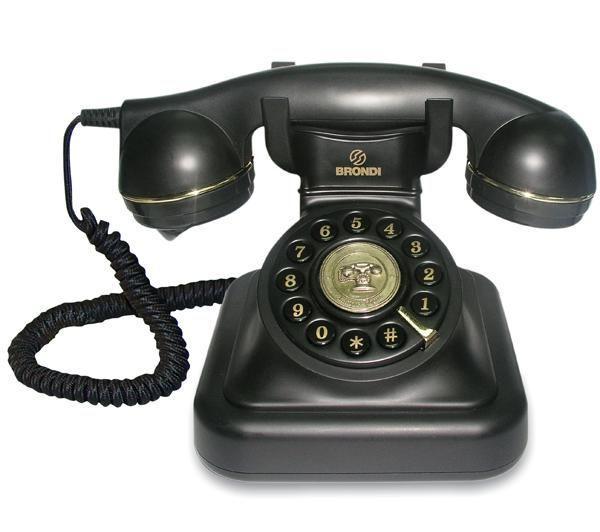 The first phone I used was a black analog phone with a ring dialer on the front where you insert your finger on a numbered slot to turn the mechanical rotary dial. You can just imagine how tedious and painful it would be to dial several numbers. Luckily, there were no mobile phones with a long string of numbers back then, and landlines only have five numbers. 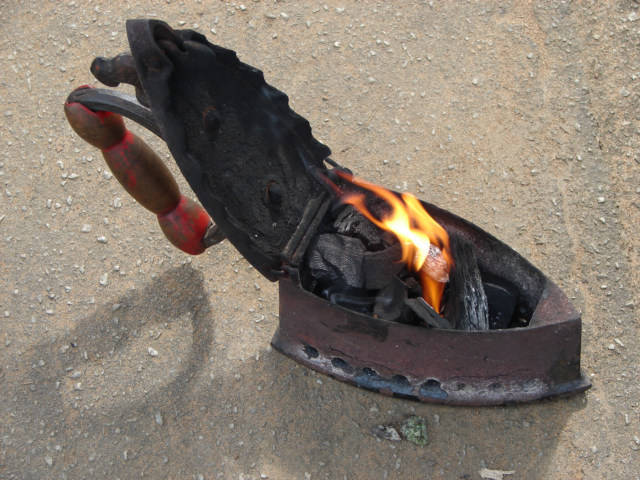 Back when there was no electricity or when it was very expensive to buy electric iron, people used charcoal flat iron to smoothen out the wrinkles on their clothes. The source of heat – hot, burning charcoals placed inside the iron cavity. It was a lot of work because you first have to heat up the charcoal, carefully place them inside the iron, keep the coals hot and free of ash (you need to take the iron outside and fan out the ash). You risk burning a finger or two just by closing and opening the lid. For better results, my grandmother would require us to glide the hot charcoal iron on pieces of unas or dried banana leaves before applying the iron onto the clothes. 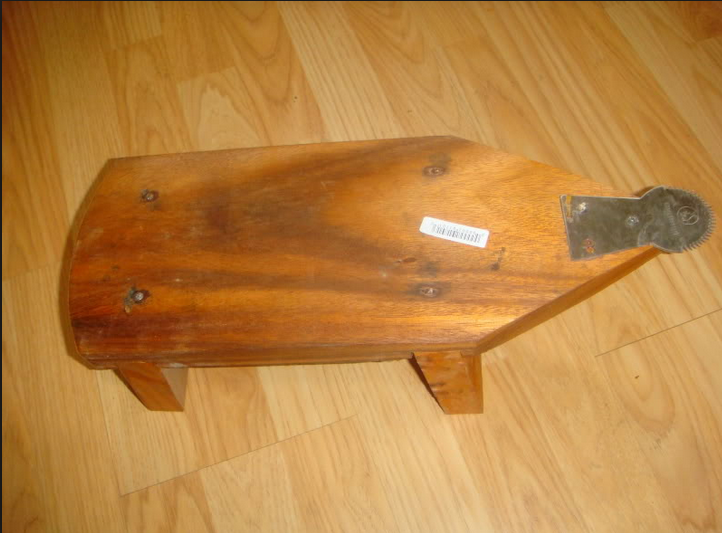 This queer-looking coconut grater is called as such because it’s shaped like a horse complete with a head, neck, body used for sitting, and legs that support it. Attached to the head is a circular piece of flat, round metal with sharp, saw-like edges. This is where you feed the half of a coconut and slide it in a continuous downward motion to grate the meat. A clean container or basin placed right below the grater head is used to catch the grated coconut. Although the kudkoran looks  nice to sit and ride on, it’s totally unsafe because of its sharp teeth. Five years ago, I used this old equipment to grind rice grains for my daughter’s porridge. It’s made of cast iron and has a receptacle, a crank and a clamp that keeps the mill attached to the edge of the table. Once set up and sturdy, it should be ready to grind whatever you’d like – cacao beans to make tableya, rice grains to make rice flour, etc. There’s a special kind of tabletop mill used to grind meat, too, with a spout attachment to fill sausage casings.

Mom’s Pizza or street food pizza was a childhood favorite. They were very simple pizza – thick crust, basic toppings – but tasted wonderful. They were pre-made and re-heated upon order inside a stovetop oven – a cube, tin equipment with a glass cover that sits on a stove that looks exactly like the one in the picture. Though not as crude as the makeshift ovens made of GI sheets or recycled barrels that bibingka vendors use, stovetop ovens are a fantastic tool for home baking. I remember my mother used to bake cakes with this. It worked great. 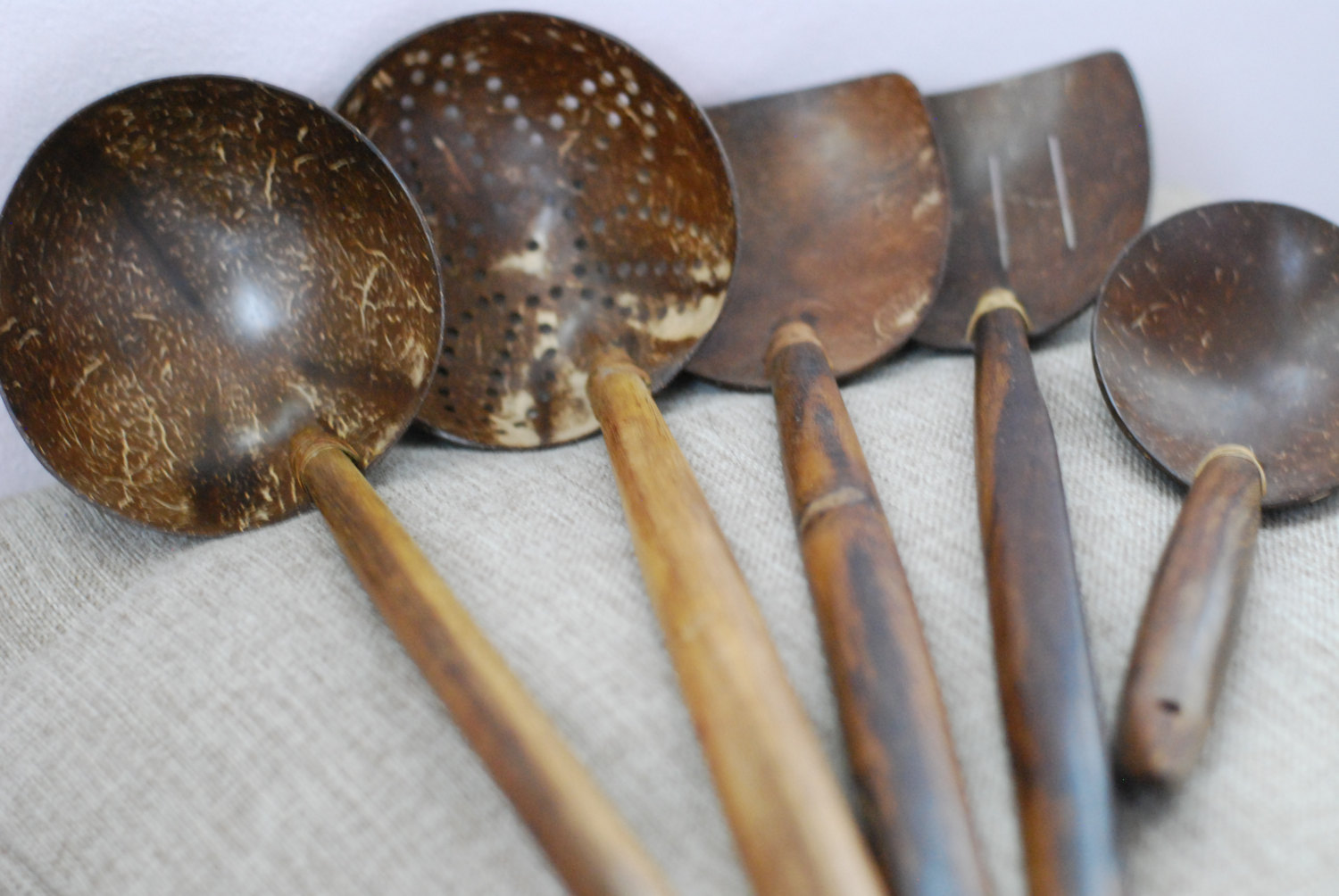 Luwag means loose in Tagalog, but in Bisaya it means ladle. And the traditional Pinoy ladle has a coconut shell (bagul in Bisaya) for its scoop and a bamboo stick (kawayan) for its handle. The handle and the scoop are tied together by abaca fiber. Traditional luwags are now widely used in Filipino restaurants to serve soups, rice and other dishes. There’s also another luwag made only of flat, bamboo stick with rounded tips used for mixing boiled corn grits. 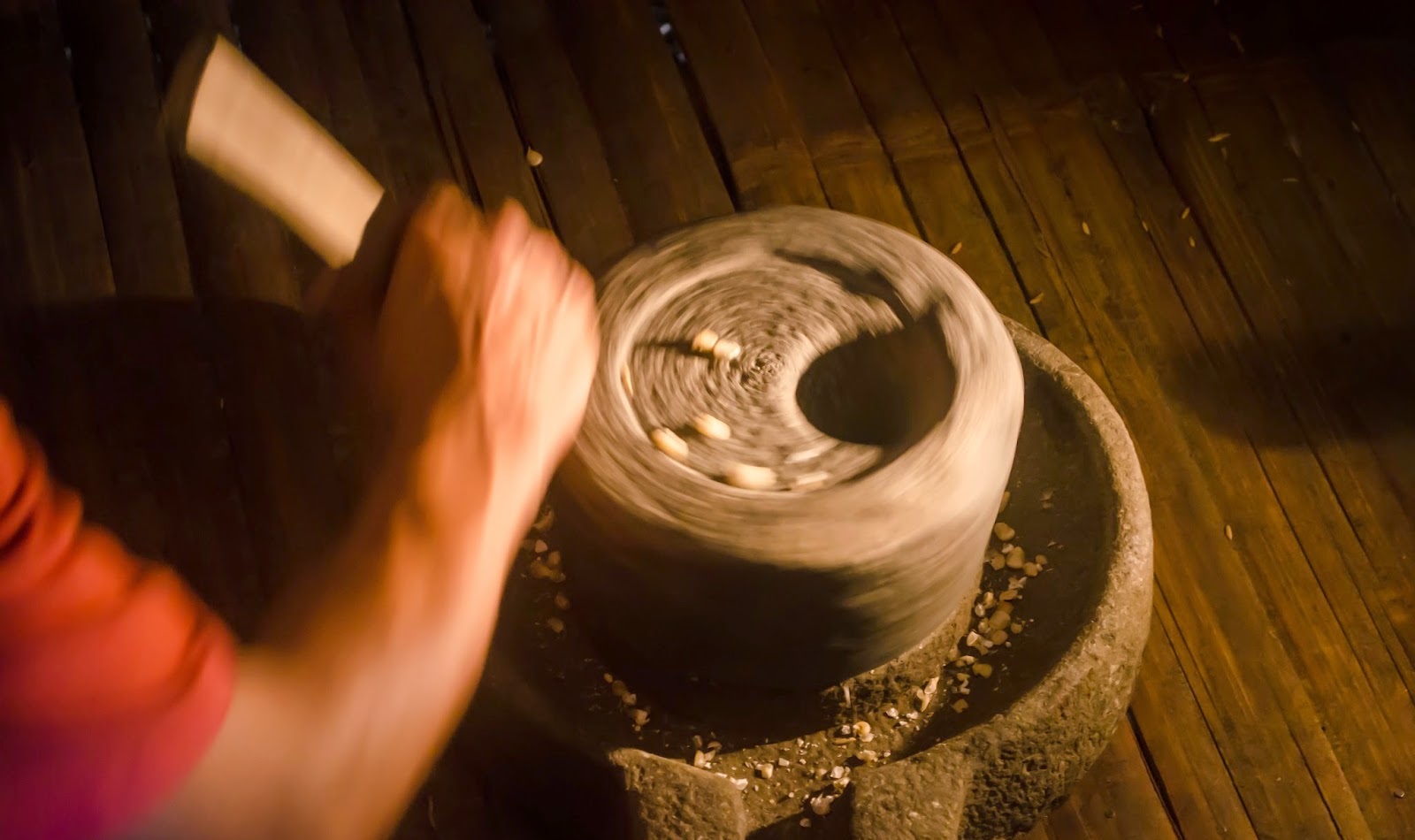 A typical Filipino stone mill has a huge cylinder-shaped stone with a hole inside, beneath it is another cylinder-shaped stone fixed onto a container. The top stone is attached to a wooden handle and turned consistently as dried corn grains are poured into the hole. As the two stones rub each other, the corn grains are grinded and then go out into the container in bits and pieces.

Some stone mills are small and can easily be operated sitting down. What my family had was huge –  more than a meter wide and had a heavy handle shaped like a large Allen wrench on one end inserted onto a loop connected to the top stone. The other end of the handle had a perpendicular horizontal attachment for easy grip and operation. The handle actually looked like the letter J with a hat on.

My big cousins would take turns pushing and pulling the handle to turn the stone mill. The handle was tied to the floor beams of the stilt house so the user can hang it and rest or check the supply of corn grains inside the top stone. For faster operation, one man operates the mill while another (maybe a child or a woman) pours in the grains. It was tricky to pour grains into the hole of the top stone while the stone is turning. 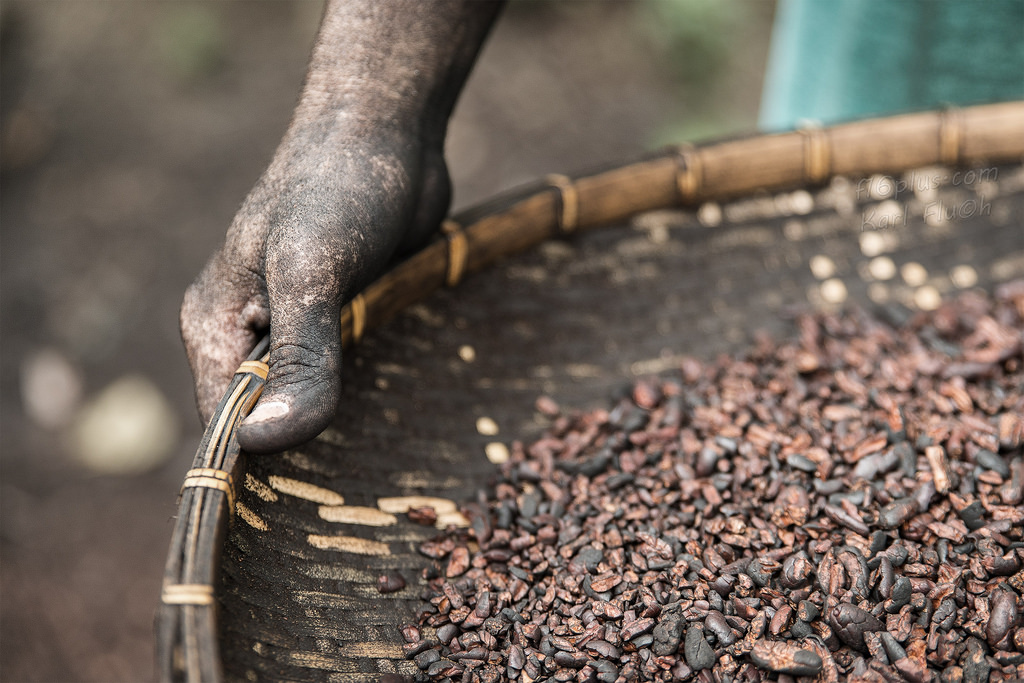 Nigo is a flat, woven basket or tray traditionally used for winnowing or separating stone-milled grits according to size and quality. Freshly milled corn grits still contain lots of hulls that feel grainy and rough when cooked and eaten. The women would wrap their heads with shawls (to keep their hair from dust), take their large, oval nigo, spread rice flour sacks or blankets on the floor, and perform the alig-ig or winnowing – a graceful way of tossing milled grains mid-air, blowing off the chaff and separating the grains according to size. The large grains are milled again while the chaff called tahop is fed to the pigs or cows. Alig-ig is also used to separate roasted cacao beans from the shells before they are grinded to make tableya or raw chocolate. I never learned alig-ig, though my father is quite good at it.

I’m not sure if Pinoys my age or those younger than I am have first-hand experience with any one of these crude tools. The alig-ig is definitely one of the most challenging methods that I wish I’d learn to do, hence the nigo is my number one on this list.

Call me lucky, traditionally raised or old in age, but I’ve seen and even used all of these crude equipment and tools while growing up. Some of these items are no longer existent, merely displayed in museums or used in traditional restaurants and business shops such as the one in Baguio.

However, some remain useful for Pinoys who remain connected to their ancestral heritage despite the presence of more modern and more convenient alternatives. Well, there’s nigo, luwag, tabletop mill, lusong and alho in my father’s retirement house that we use in the traditional way until this day. How about you – have you experienced using any of the stuff listed here? If not, would you be interested to?