You can say a lot about a country and its culture through their food. For Filipino cuisine, it’s a giant hodgepodge of different influences (mainly Spanish, Chinese, American) and the warm comfort of family and love. We Filipinos treat eating, and even cooking, as a social event. Often times, everyone pitches in and helps with the preparations. We also usually serve food buffet style, where in all the food is placed in the middle of the table for everyone to help themselves with.

Soup dishes are common is any Filipino meal. It serves a lot of people, ingredients are cheap, and it’s simple to prepare. Below are 10 Filipino soups that you should try. 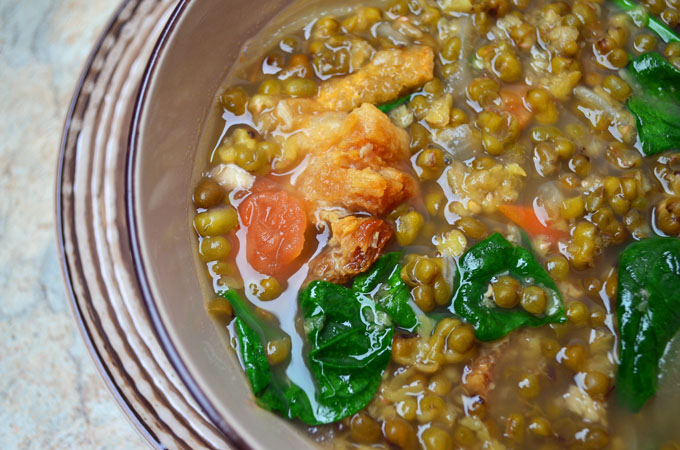 This has to be the most classic Filipino soup dish. Not only does it taste good, mung beans are also packed with protein and other vitamins and nutrients that are good for you.  Growing up in the Philippines, you were probably told to finish your monggo soup because it would make you stronger. This is because mung bean soup is often the meal served after a bayanihan (the act of moving a nipa hut from one place to another). This is probably why monggo Soup is considered as a “worker’s meal”. The mung beans are cooked with water or broth until they become soft. in another pot, garlic and onions are sautéed and meat is added. The cooked mung beans is then added to the meat mixture and is left to simmer for the flavors to develop. 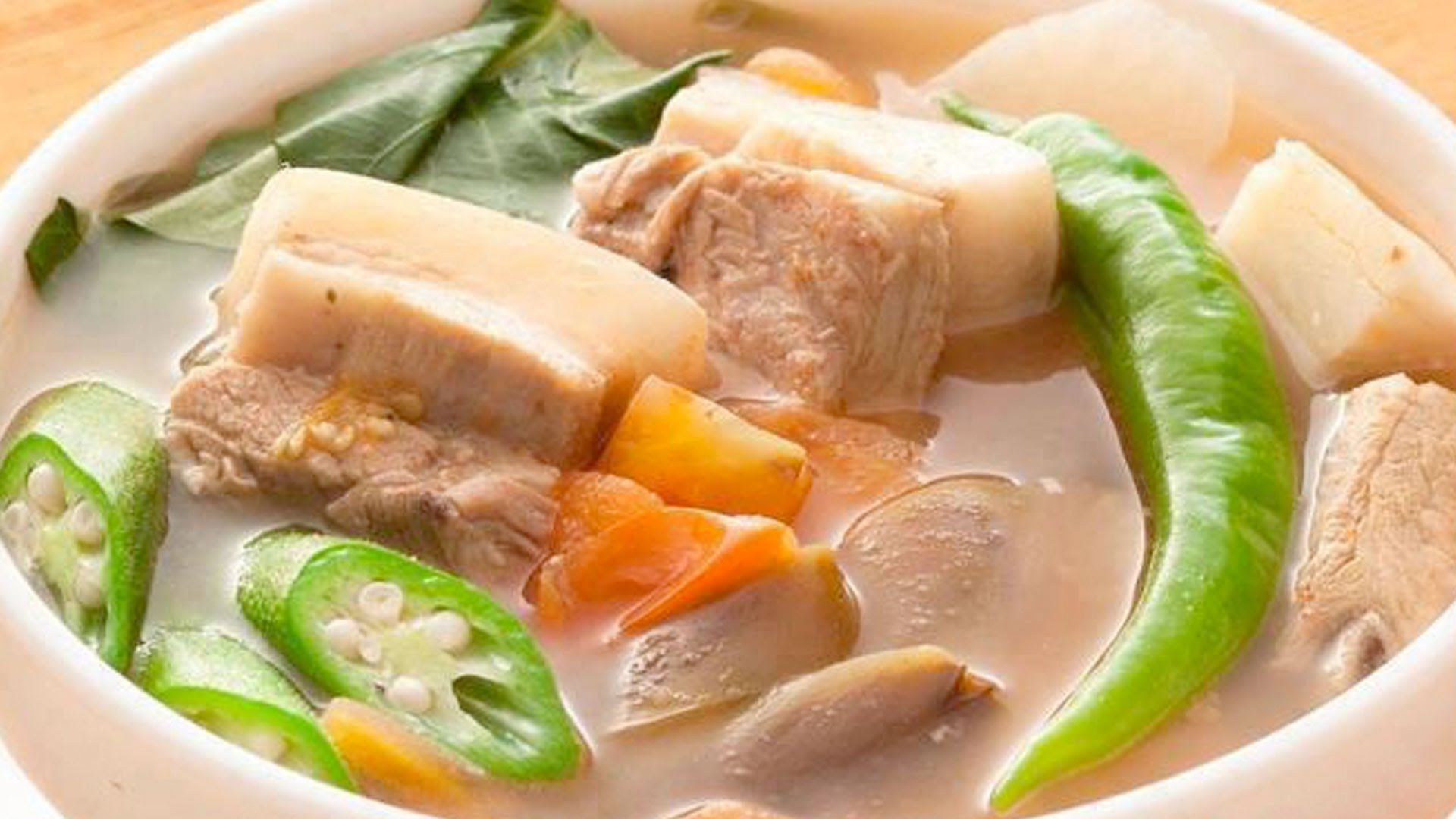 This sour and tangy soup is traditionally flavored with tamarind, a leguminous tree that produces a fruit which is sour when unripe.  First, garlic and onions are cooked until soft and fragrant (like almost all savory recipes in Filipino cooking). The other flavorings and ingredients are added in the pot to cook, which usually include the unripe tamarind fruit, tomatoes, chilies, okra, eggplant, taro (gabi), water spinach (kangkóng), daikon (labanós), and yardlong beans (sitaw).  After the broth develops its flavor, meat (usually pork or fish and prawns) is added. The meat simmers in the broth till it cooks, giving it a slight our flavor from the broth. Different variations of this dish uses  ingredients such as guava, calamansi, bilimbi (balimbíng), or unripe mango to give it its distinct sourness. Sinigang seasoning powder are the most common alternatives to using natural fruits. 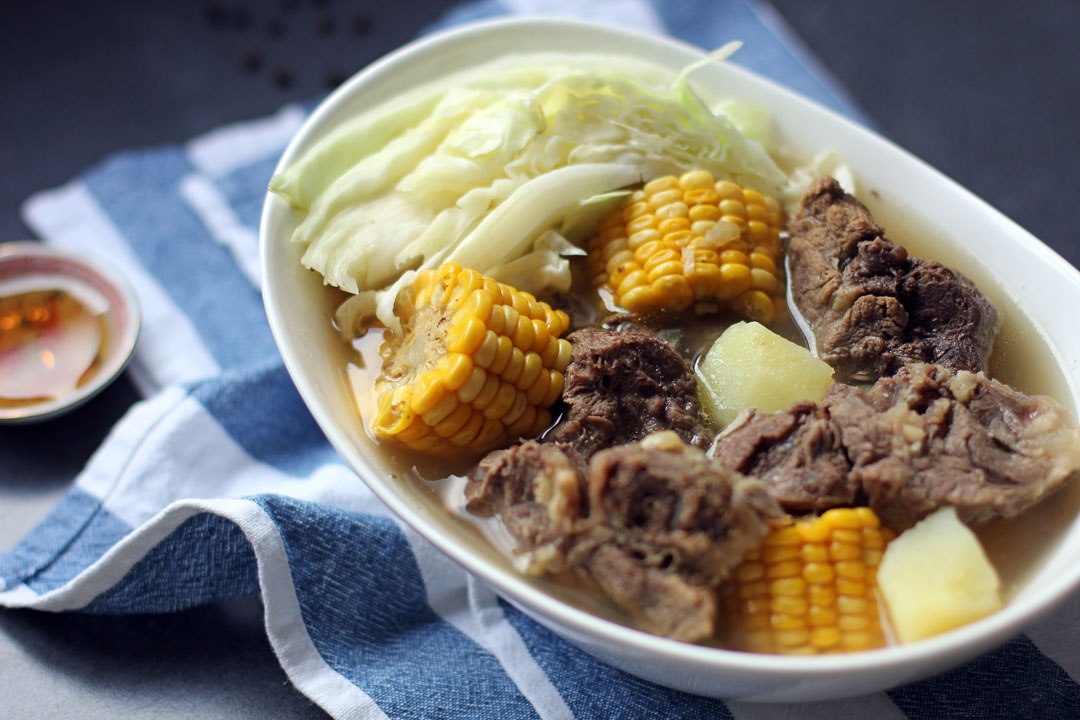 Although most recipes use pork ribs for this soup, any bonny cut of pork (baboy) or beef (baka) can be used. This recipe is probably the most simple Filipino soup recipe to make. It starts by cooking down some garlic and onions. The meat is then added, followed by the vegetables. The veggies in this dish are usually compose of cabbage, baby bok choy (or pechay), potato, chayote, squash, and sweet corn. the stew is left to simmer until the meat and vegetables are fork tender. Adding a lot of leafy green veggies to this dish since it helps give it a more appetizing look and more nutrients. some also add Saba bananas to the stew for texture and a little sweetness. 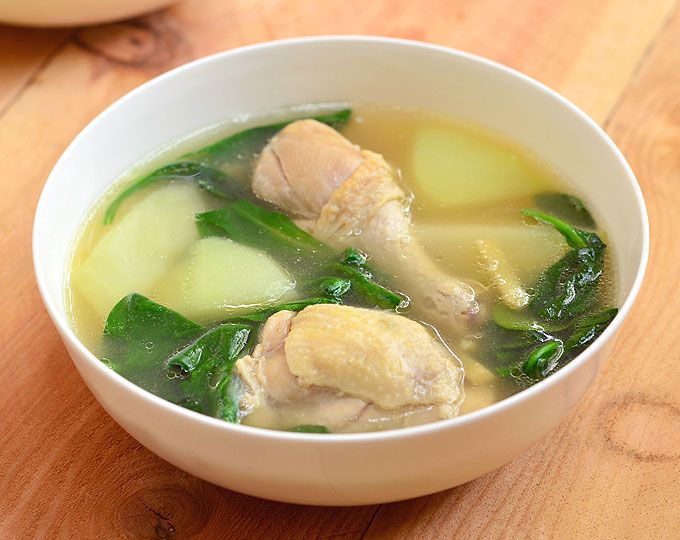 A simple, but healthy dish made with chicken, vegetables, and malunggay or moringa leaves. the chicken is first cooked with a little garlic, ginger, and onions before water is added. Lemongrass  and spices are added to give the broth flavor. Chayote is added and cooked until fork tender. finally, the malunggay or moringa leaves are added and stirred in the soup for less than a minute to keep its freshness. Tinolang manok, along with nilagang, monggo soup, and sinigang are the most common soup dishes Filipinos make at home. 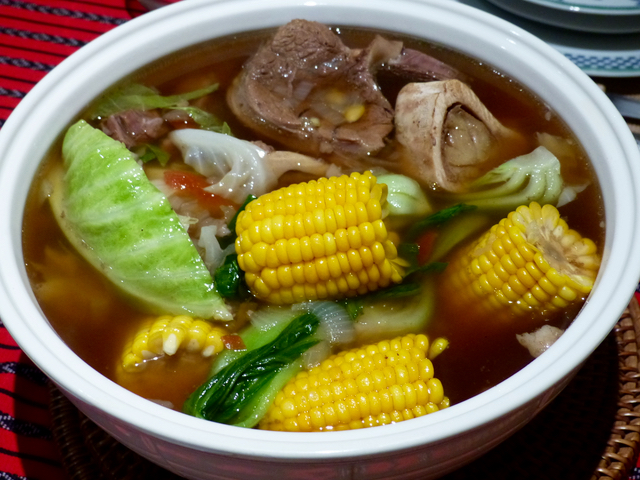 This hearty soup is similar to nilagang baka, but it specifically uses beef shank and beef marrow bones. It has a light colored, but flavorful, broth that goes oh so well with rice. This is made by cooking the beef shank and beef marrow bones for hours and hours, until the meat becomes tender and the fat and collagen connected to the bones melt into the broth. seasoning for this dish usually stays very simple. salt and pepper are always present. Some cooks add bay leaves, soy or fish sauce, and even garlic and ginger. sweet corn, bamboo shoots, and cabbage or bok choy are also usually added in the broth a few minutes before dishing it out just to cook out the rawness. 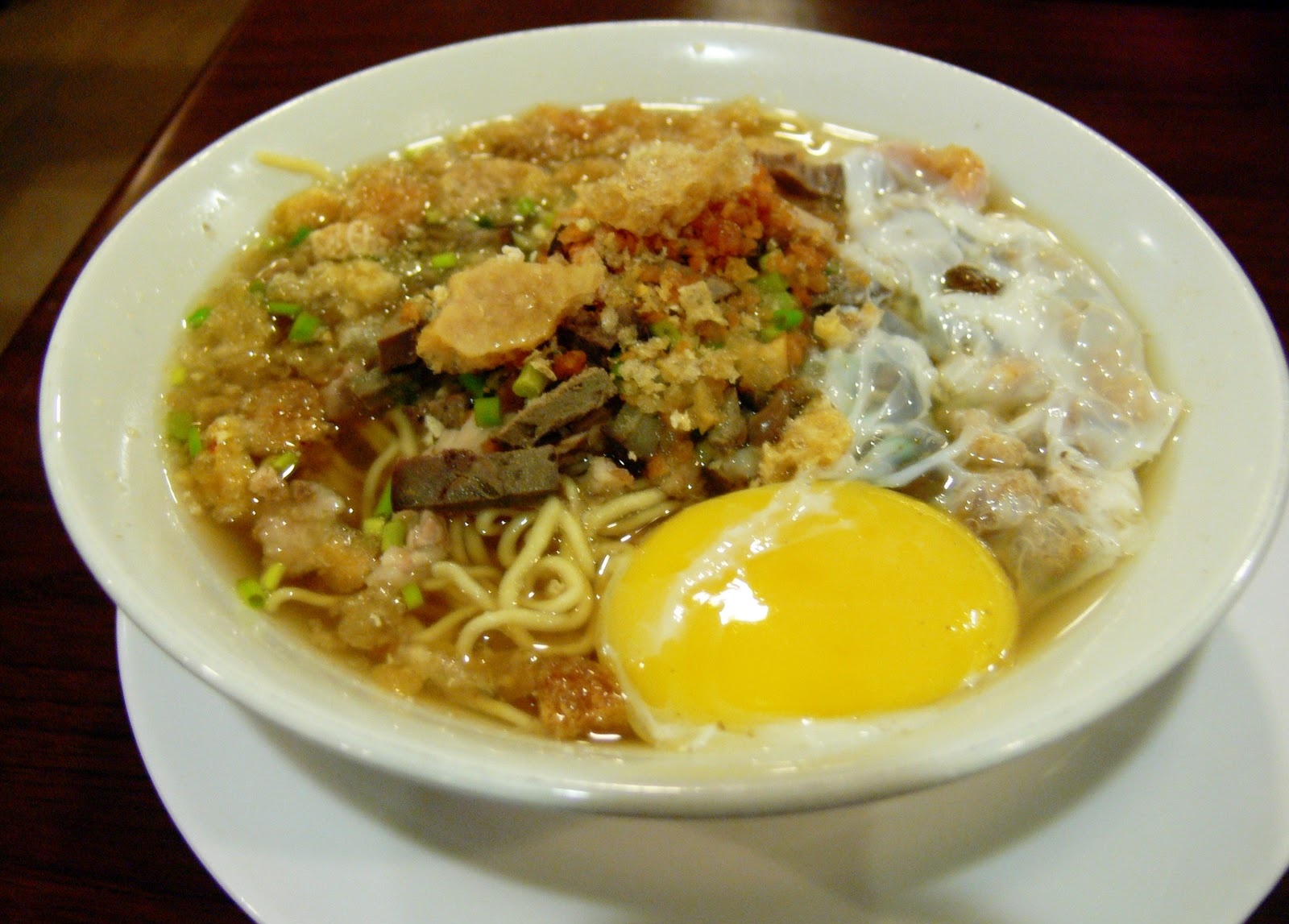 The usual late night craving, drunk food, and hang-over cure, batchoy is a common street food that’s hearty and filling. It has miki noodles, pork or chicken, and a clear, flavorful broth. the broth is often made by melting a pork or chicken bouillon cube into a couple of litters of water. additional seasonings such as salt, pepper, onion powder, garlic powder, and sugar is added. Pork or chicken and liver is added to the broth and left to cook until fork tender. Some people add pork intestine or beef tripe to the broth for added texture. The meat is taken out of the soup and chopped up into small pieces. to serve, cup of miki noodles is prepared in a serving bowl and the broth is poured over it. the meat is placed on top, along with crushed chicharon, fried garlic bits, slices of hard-boiled egg, and chopped fresh scallions. 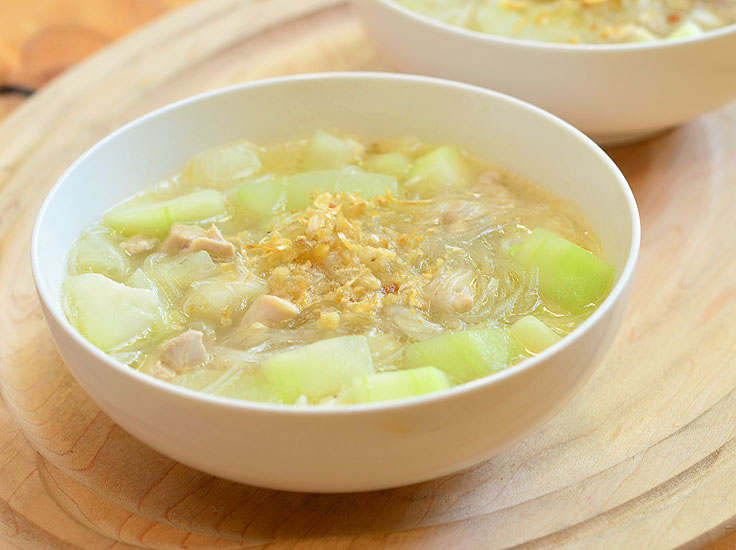 This is a noodle soup made with sotanghon or cellophane noodles and a light broth, often flavored with chicken and vegetables. chicken is cooked in the broth along with onions, garlic and ginger. Cilantro, annatto  or atsuete powder, and fish sauce is added to give it more flavor and color.  Once the chicken is cooked, strips of carrots and cabbage is added to the broth. The veggies become soft, the cellophane noodles are added and cooked until soft but firm. once the salt and pepper is added to taste. like batchoy, sotanghon is served topped with chopped fresh scallions, slices of hard-boiled egg, and fried garlic bits. 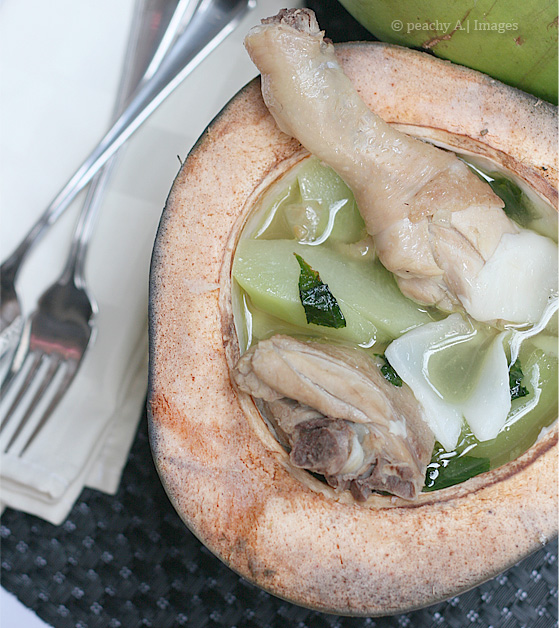 Chicken binakol is a special chicken soup dish which is similar to tinola, only it contains coconut water and meat and no moringa leaves. coconut water is mixed with the chicken broth for the base of this soup. The chicken is cooked in the broth, along with chayote and green papaya. lemon grass and ginger are added for a fresh, slightly spicy, flavor. Papaitan is well-known Ilocano soup dish that mostly uses cow or goat innards as a main ingredient. The dish’s name is derived from the word “pait”, meaning bitter. The bitterness of the soup actually comes from bile, which is a bitter juice that’s extracted from the gallbladder. although a lot of people love this dish, it is an acquired taste. You’ll like papaitan once get use to the bitterness and don’t mind the ingredients, which includes the tripe, small intestine, cow’s heart, and beef.  Ginger, onion, garlic, and chilies are also added to the soup which gives it a powerful punch. 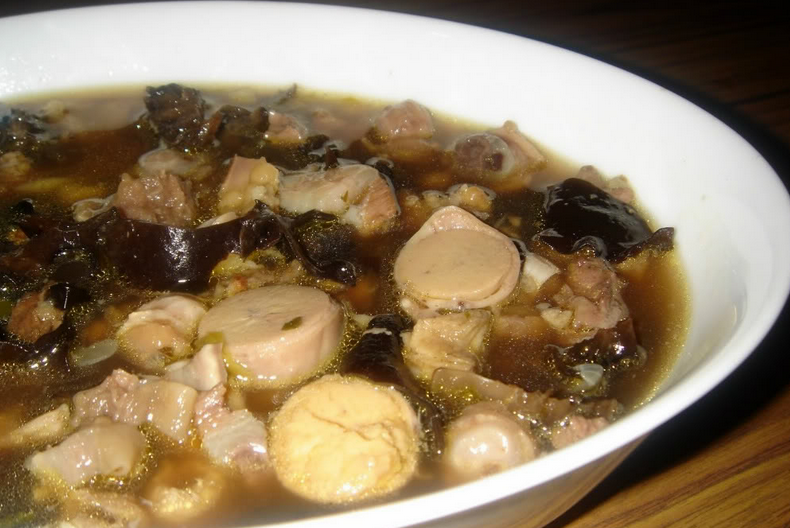 Ok, this soup freaks some people out, but a lot of Filipinos actually like this. Soup number 5 is a rich, chunky, usually spicy soup that contains a special ingredient. Soup number 5’s main ingredient is actually bull’s penis and testes. the bull’s penis and testes are boiled until cooked and tender. they are then chopped up and added to a stew made with pork or beef, beans, vegetables, and herbs. Soup number 5 is also known as lansiao in some areas in the country and is usually sold at night as it is believed to have aphrodisiac properties.

Which of these soup dishes do you miss? Leave us a comment, as well as your suggestions, below. Don’t forget to share this article to your food-loving friends and family.