Top 10 Samples of old writings in the Philippines 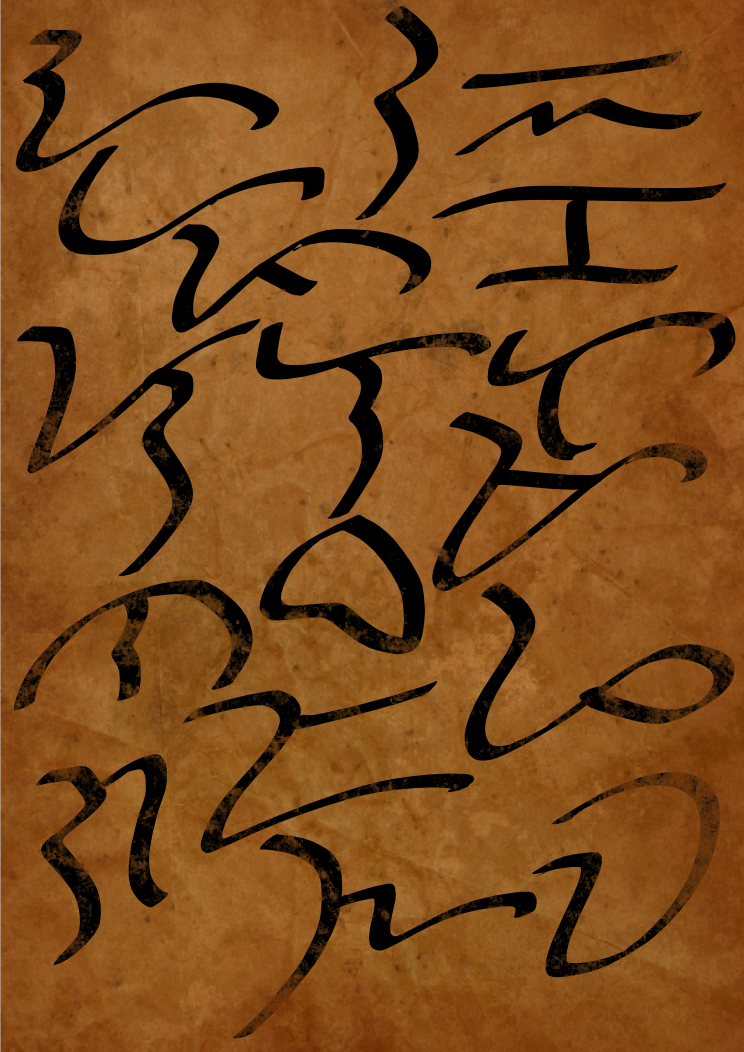 Long before these islands, now known as the Philippines, were conquered by Spaniards, Americans, and Japanese, the people have been experimenting with writing systems. The development of writing here was slow – maybe because writing was of much concern mostly for royal courts and traders (the oldest deciphered writing in the Philippines is a receipt).

The earliest fully developed old writing system recorded in the Philippines dates from about the 10th century. The latest discovered dates back to the period of insurrection against the Spaniards in the 19th.

Of these, the most famous is the Baybayin, commonly (and erroneously) known as “alibata”. Baybayin was still undergoing local development (we were using it for writing poetry, love letters, short messages) when we were rudely interrupted by invaders. Since we were busy becoming Indios (subjugated inferiors of the Spaniards), we had no time to fully develop Baybayin, and we dropped it altogether by the 1700s. Baybayin is easy to write, and harder to read because any word, ending in a consonant with no vowel sound, had to drop the consonant, giving rise to possible confusion (and funny) readings.

There are many competing theories as to where we got Baybayin. Some say we got it from watching giant clam (Tridacna) shells. Some say we got it from ancient petroglyphs. The most obvious thing is it is derived from Indian-derived scripts. From the way ending consonants are dropped, someone theorizes it probably came from Bugis or Makassar traders of Sulawesi (Celebes), east of Borneo.

Here are the top 10 samples of old writing found in the Philippines: 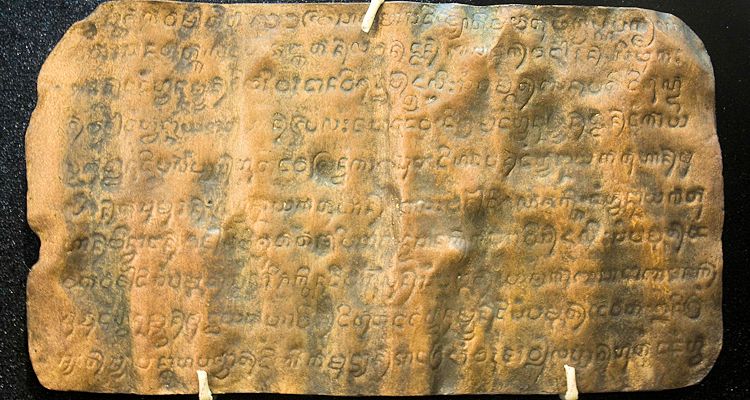 The Laguna Copperplate Inscription (LCI) is one of the oldest of the deciphered ancient scripts in the Philippines. Written on it is a date that corresponds to April 21, 900 AD. It is a notice of receipt of debt payment, freeing the debtor’s descendants from falling into slavery (numbers correspond to lines):

(1) Hail! In the Saka-year 822; the month of March-April; according  to the astronomer; the fourth day of the dark half of the moon; on (2)  Monday. At that time Lady Angkatan together with her relative, Bukah  by name, (3) the child of His Honor Namwaran, was given as a special favor, a document of full acquittal, by the Chief and Commander of  Tundun (4) represented by the leader of Pailah, Jayadewa. This means  that His Honor Namwaran, through the Honorable Scribe (5) is totally cleared of a salary-related debt of one kati and eight suwarna, in the presence of His Honor the leader of Puliran, (6) Kasumuran: His Honor  the Leader of Pailah, represented by Ganasakti; His Honor the Leader of (7) Binwagan, represented by Bisruta. And, with his whole family,  on orders of the chief of Dewata (8) represented by the chief of Mdang, because of his loyalty as a subject of the Chief, therefore all the descendants (9) of His Honor Namwaran are cleared of the whole debt that His Honor owed the Chief of Dewata. This in case (10) there is  someone, whosoever, sometime in the future, who will state that the  debt is not yet acquitted of His Honor.

The LCI was a dark, rolled up piece of copper sheet dredged up in 1989 by a laborer in Lumbang River, Barangay Wawa, Lumban, Laguna. The place-names are could be Tondo, and some parts of Bulacan (Paila, Puliran, and Binwangan).

Deciphered in 1992 by Dutch anthropologist and Hanunó’o script (another old writing in the Philippines) scholar Antoon Postma, the language of the LCI is in Sanskrit, with a lot of old Malay (related to old Tagalog) and some old Javanese thrown in. The script itself is in Javanese Kawi. It wasn’t a script meant for the masses and its use was lost, later to be replaced by a relatively unrefined script, the Baybayin, in the 14th century.

Dating back to the 14th-15th centuries, the Butuan Silver Strip is not yet deciphered. Found in the 1970s, in Butuan, by archeologists from the National Museum, most Internet sources say it was taken possession of by Proceso Gonzales, the city engineer of Butuan back then (more than 40 years have already passed since the 1970s – he can’t be city engineer forever). An Indonesian expert thinks the writing in the strip is related to Kawi, although the writing is blocky – probably because it was carved with a knife. 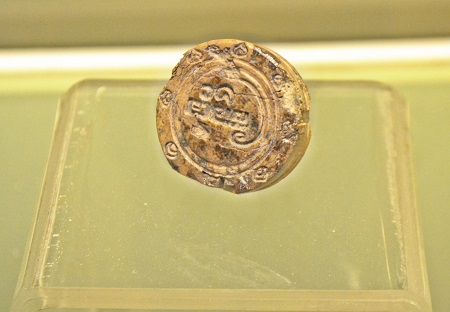 Another Butuan find, the Butuan Ivory Seal is dated back to 1002 CE. It was discovered in a shell midden site in the 1970s. Written in Kawi, it is translated to say “Butban” – probably the old spelling of Butuan – pronounced today as “butwan” (not “butú-an”, as an ABS-CBN voice talent once said it, or else it will mean, in Bisaya, as “someone with a remarkable butu” – which, incidentally, ties up nicely with the joke meaning of “maharlika”, “maha linga”, “great p__s”). It is a testament to the former importance of Butuan as a center of trade. 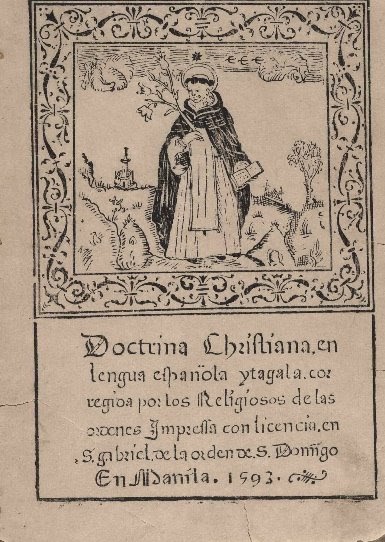 Published in 1593 by Fray Juan de Plasencia, the Doctrina Christiana is probably the most famous document with Baybayin writing in this list. It is a cathechism, containing prayers and doctrine that are also written in Baybayin. In fairness, the Spaniards wanted to be understood better by the natives in their own writing, hence the inclusion of Baybayin. The use of Baybayin, however, gave way to the Latin alphabet by the mid 1600s since Latin writing was easier to read and was used in Spanish, the language of the elite and of trade.

The Doctrina Christiana appears to be the source of the curly “classic” Baybayin we now think of as “definitive”. However, this appearance is probably due to the attempts of early local printers (could be the friars themselves) to “Romanize” the look of Baybayin – Baybayin was first mostly written on leaves, bark, or bamboo strips with a small dagger. It is impractical to write curly script using a dagger. Relatives of the Baybayin still used today include the Mangyan Hanunó’o and Búhid scripts, the Palawan Tagbanua, and the Kapampangan Kulitan. They have evolved into their own distinctive styles. 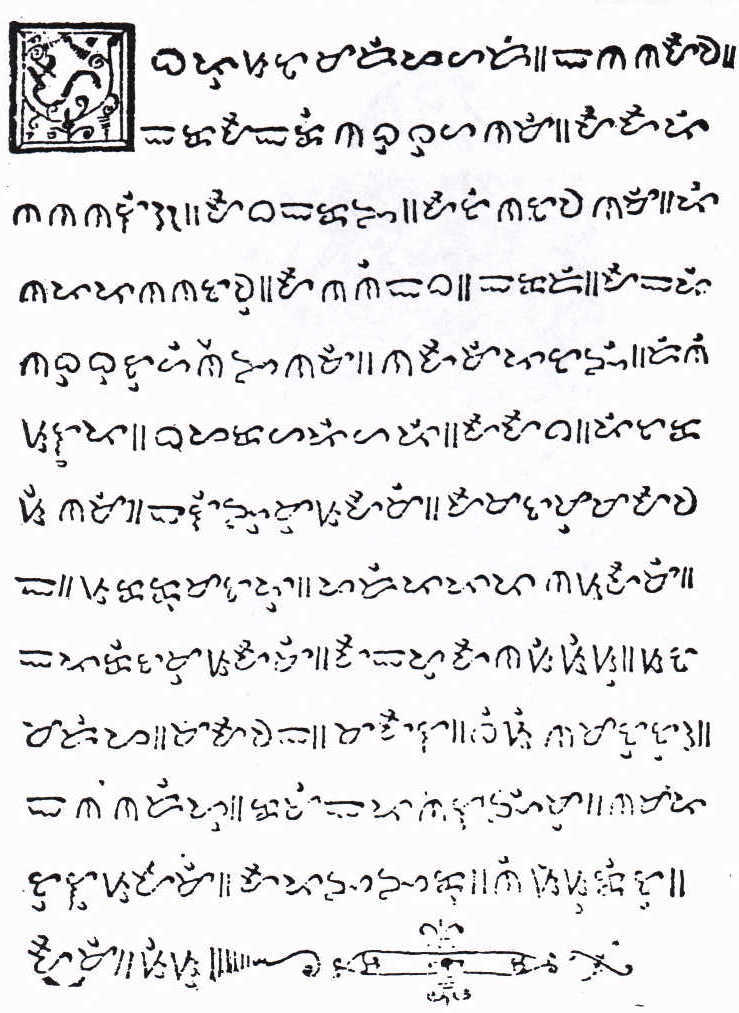 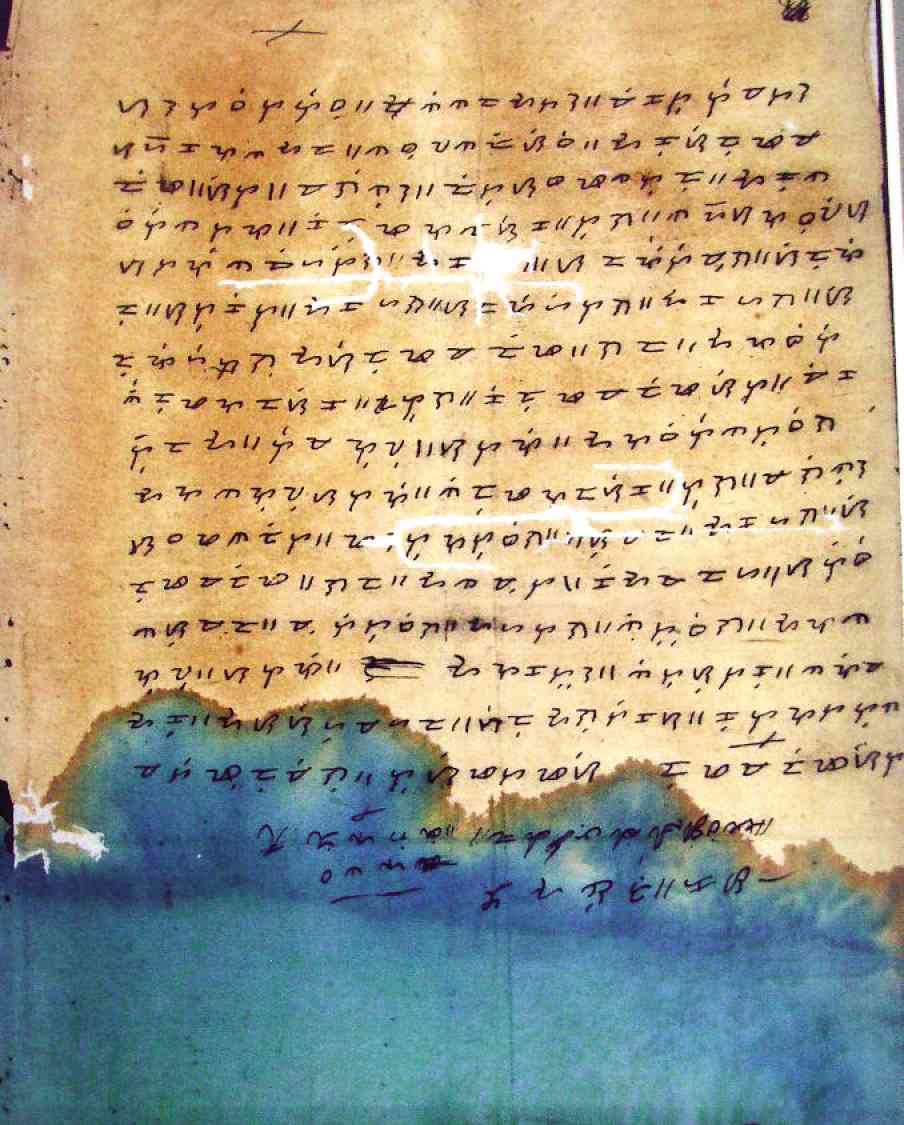 The University of Santo Tomas (UST) holds the biggest extant collection of Baybayin documents in the world. The collection is declared a national treasure. Above is a water-damaged page of a land deed in the 17th century (dated 1613 and 1625), when people started using feather quills (no longer daggers) as writing instruments.

This is easily the least known in this list. This was posted by linguist and old Southeast Asian scripts expert Christopher Ray Miller on Facebook. This is a certification that the signatories (town dignitaries) acknowledge their obligations (with some protests) to their local priest (priests were the top of the pyramid then). By this time, 1681, the Baybayin was already relegated to signatures (by the 1700s, people stopped using Baybayin in general). It reads:

Roughly: “In proof of this, we signed our names, in the Tagalog script, at the presence of Don Domingo, chief Hernandez Mibaras [mayor, the one who holds the baton], here in the new town of San Pablo, Mayubok, Visita of Gumaka, Judgment Hall of Kalilayan, on this day the 9th of May, 1681.”

This document is with the Archivo Franciscano Ibero-Oriental in Madrid. The place is now Brgy. Mayubok, Pitogo, Quezon. 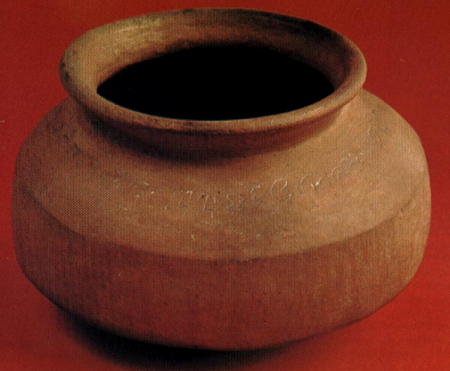 The Calatagan Pot (named after its place of discovery, Calatagan, Batangas) was offered by treasure hunters to National Museum staff in the early 1960s. It is said to date from the 14th-16th centuries. Its 1960s discovery predates the discovery of the Butuan Ivory seal, the Butuan Silver Strip, and the Laguna Copperplate Inscription (1970s and late 80s). Since then, there have been a lot of attempts at translating the CPI: 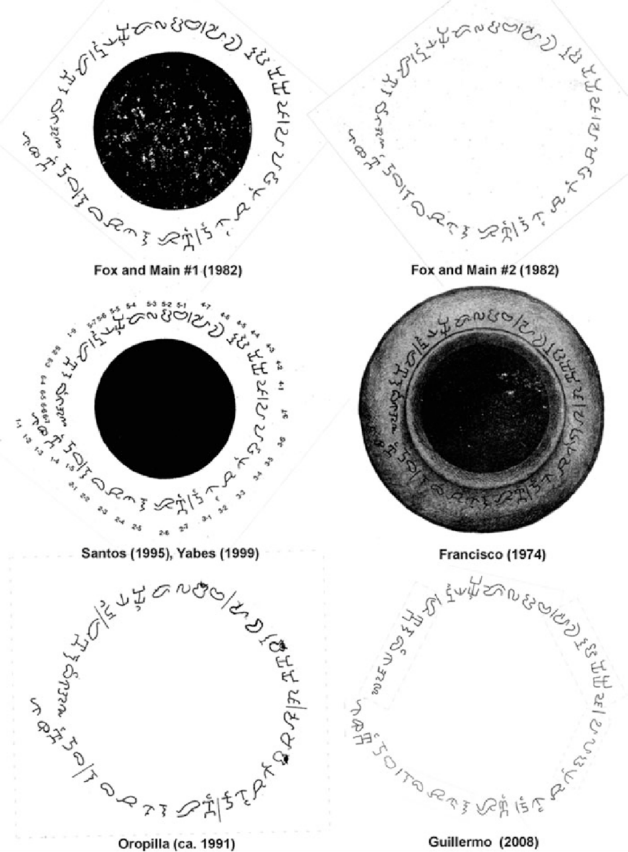 Ramon Guillermo (2009) thinks the inscription is in Visayan and translates it as an incantation to harm (ala-Harry Potter’s the Dark Arts):

Gana Bisa Kata [Powerful is Gana’s Word]
We have a sword
Evil, faults, falsehood
Just chant this, Shaman(s)
Let us read the signs
Spell/power of this pot!

Rolando Borrinaga (2010) translates this also in Bisaya, as an incantation to bring back a disappeared person – a victim of bugkut (abduction by supernatural creatures who live in dakit [banyan] trees):

Is it open already? [the gateway to the spirit underworld]
Take it as a gain now, nevertheless, dãkit tree,
That he/she [strayed soul] mistook you for a mango tree,
[He/She] just crossed [to your domain] out of fear alone, is that so?
Leave the dãkit tree now, will you?
Shame/Intimidate/Bring [back] the soul that you [were told to] encounter. ~

No doubt other transcriptions will still surface. 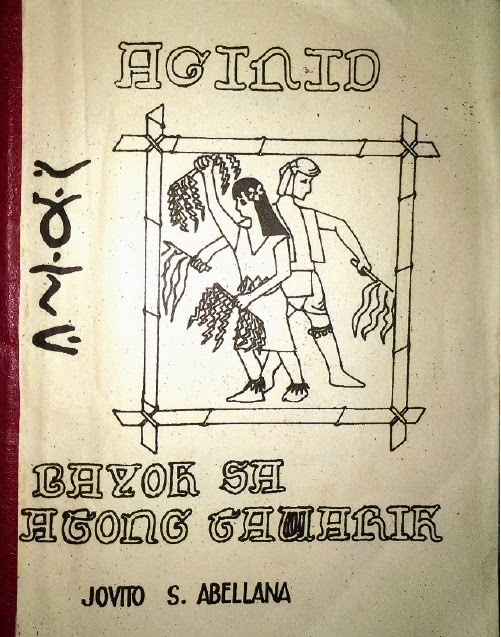 The Aginid Bayok Sa Atong Tawarik, or Glide On Ode To Our History, is a transcription of Jovito S. Abellana’s oral epic family history in Cebu published in 1952 (available for purchase at Cebu Normal University). Two famous 16th century Cebu characters, Rajah Humabon and Lapu-lapu are mentioned in the Aginid. The Aginid is written partly in ‘Badlit’ – a Cebuano version of Baybayin – in a style described by Old Tagalog expert, Jean-Paul Potet, as “calque of Spanish spelling by someone who didn’t know the spelling rules of Baybáyin.” In fairness, the Aginid story could be authentic, but the Badlit could be Abellana’s own embellishment. When Antonio Pigafetta recorded the meeting between Ferdinand Magellan and Rajah Humabon in 1521, the Baybayin script was still unknown in Cebu. No authentic old Baybayin writing was recorded in Cebu prior to Abellana’s Aginid (even though the Spaniards started the conquest in Cebu). The Hiligaynon of Panay and the Waray of Leyte and Samar were recorded by priests to be already using Baybayin in the 17th century – it was also called “Surat Moro”, since it came from the Islamized trading centers of of Luzon (Manila and Tondo). 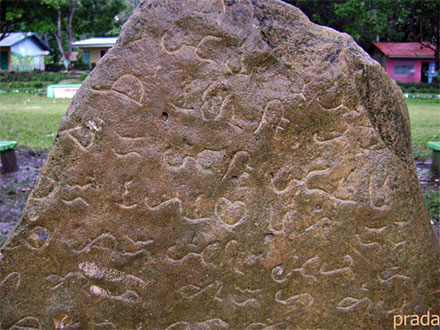 Also known as the Rizal Stones, or Monreal Stones (from the municipality where they were found), they became famous in 2011. Eleven years before, they were used as a stepping and mud-scraping stone in Rizal Elementary School in Ticao Island, Masbate (hence the ‘Rizal’ in the name). It is not yet certain if these stones are authentic. Some say the writing resembles the Romanized-style Baybayin in Fr. Francisco Lopez’ 1620 Ilokano Doctrina – which, if true, would indicate the writing to have been done by someone only familiar with the Doctrina Christiana Baybayin writing style. The writings appear to have been carved after the stones have broken up, as indicated by the way the lines in the bigger stone fan out, following its trapezoidal shape: 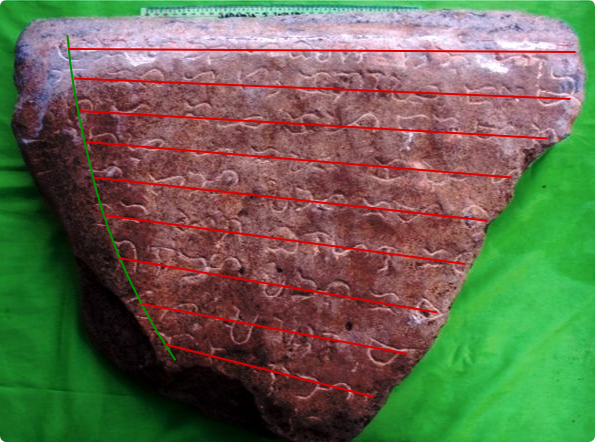 If so, the stone couldn’t have been a free-standing marker when it was carved 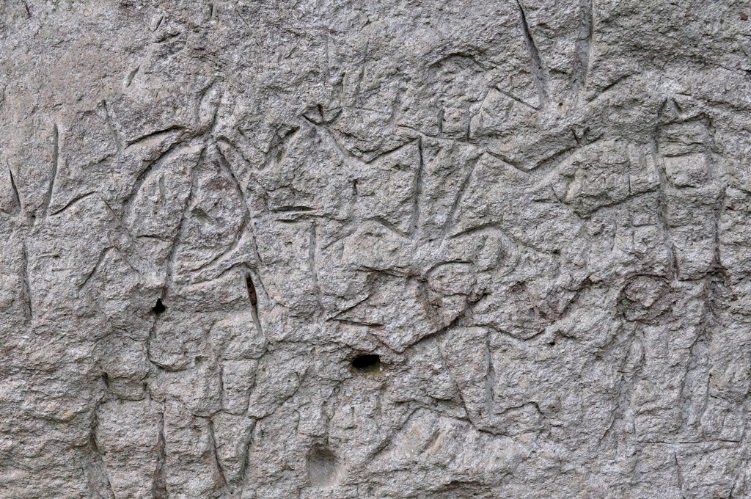 While not really a system of writing per se, the Angono Petroglyphs (in the place where the borders of the municipalities of Angono, Binangonan, and Antipolo, Rizal province meet) are probably the oldest in this list – being dated around 3,000 BCE – the late Neolithic. Some say they are the ancestors of Baybayin, although this is improbable. There are 127 characters etched on the side of a rock shelter at the end of a tunnel in the property owned by East Ridge Golf Club. The writings are now endangered. Prominent among the carvings is the Squatter Man configuration, a motif also found in other petroglyphs around the world, which is theorized as a long-term plasma phenomenon in the ancient skies. 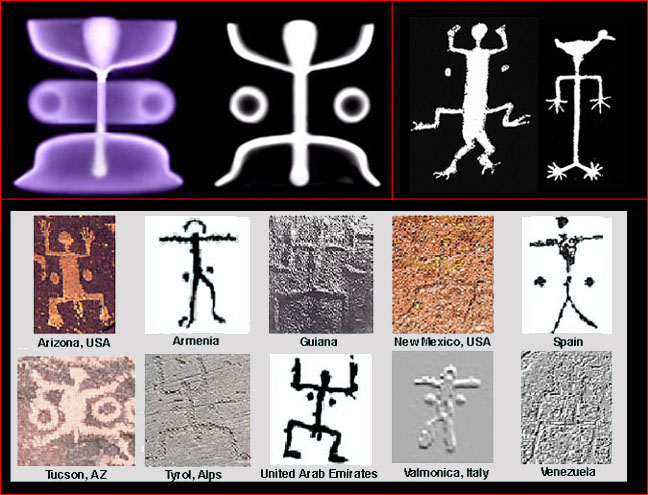 Know other old writings we forgot? Please let us know in the comments.