COVID-19 pandemic has left many people jobless not only in the Philippines, but as well as in other countries. That’s why Feby Dela Peña was stricken upon seeing her fellow Filipino immigrants standing outside the building and waiting for the free for to be given. Despite her unemployment, she didn’t hesitate to help these people – even if that means using the money which was meant to feed her family of five for a month. 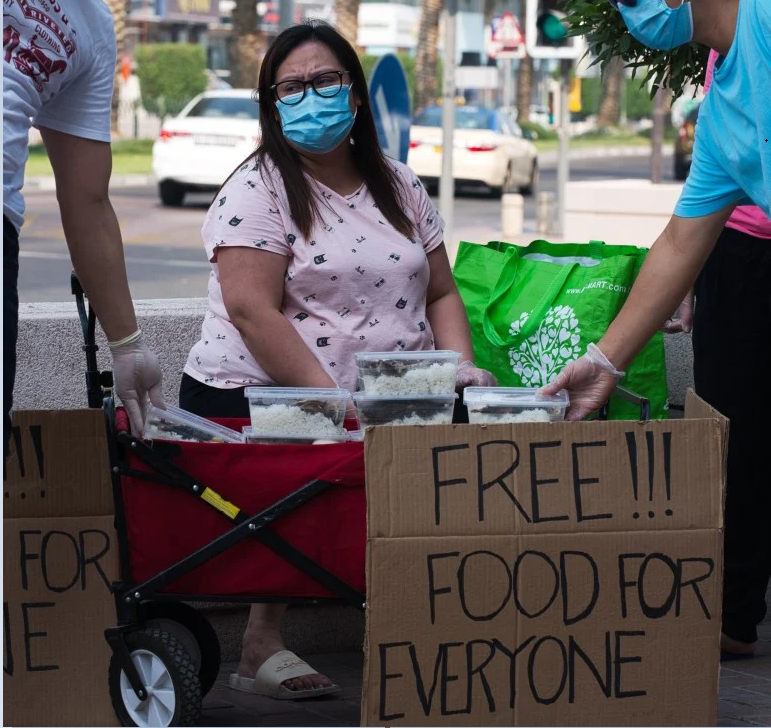 Upon knowing her intensions, the other housemates of Feby Dela Peña – who lived with her in their shared apartment – also chipped in. They were able to raise about 500 dirhams or $136 worth of groceries which includes sacks of rice and frozen chicken. This then scaffold Dela Peña’s project Ayuda.

Feby Dela Peña’s “Ayuda” aims to provide 200 free meals to her fellow Filipino and those in need in Dubai. The project was spearheaded because many are still struggling to secure their meals even if the Philippine government already promised to give one-time cash assistance to overseas workers and the United Arab Emirates has been doing a nationwide initiative to feed the poor.

Despite the struggle of taking care of her three children at home and preparing 200 meals a day, Dela Peña remains committed for this drive. She was used to selling home-made meals for her friends before and also has a food safety license.

At first, Dela Peña heavily relies on her husband’s income for finances. However, when her initiative spread on social media, other people began reaching out, dropping off cartons of eggs, and bags of rice. In fact, an influential blogger in Emirates also gave 10,000 dirhams – that’s $2,700!

Dela Peña is also aided by her housemates, husband, and brother-in-law for the food preparation. She uses her children’s wagon for the meal delivery every day. Aside from Filipinos, there are also Africans, South Asians, and other foreigners who now rely on the free meals provided by Dela Peña. According to them, they were asked to stop working and didn’t receive payment anymore since March.

To ensure safety, Dela Peña asks those who would like to get the free meals to always practice social distancing, to stand meters apart from each other, and wear masks. Although she’s nervous that the authorities in Dubai may reprimand her for violating laws on public gatherings and food distribution, Dela Peña believes that she has to continue such cause because if she stops, many people will stop eating as well.