Remember those days where you’d spend hours and hours outside the streets by your house playing with your neighbors until mom would call you back in for dinner? Nowadays, kids spend most of their time inside the house playing with the tabs or sitting in front of their computer doing their thing on Facebook.

However, this shouldn’t stop you from teaching them about the wonders of going outside and having fun. Playing outside is a way for them to learn social skills and get some exercise. Here are 10 classic Pinoy games that you can teach to your kids. 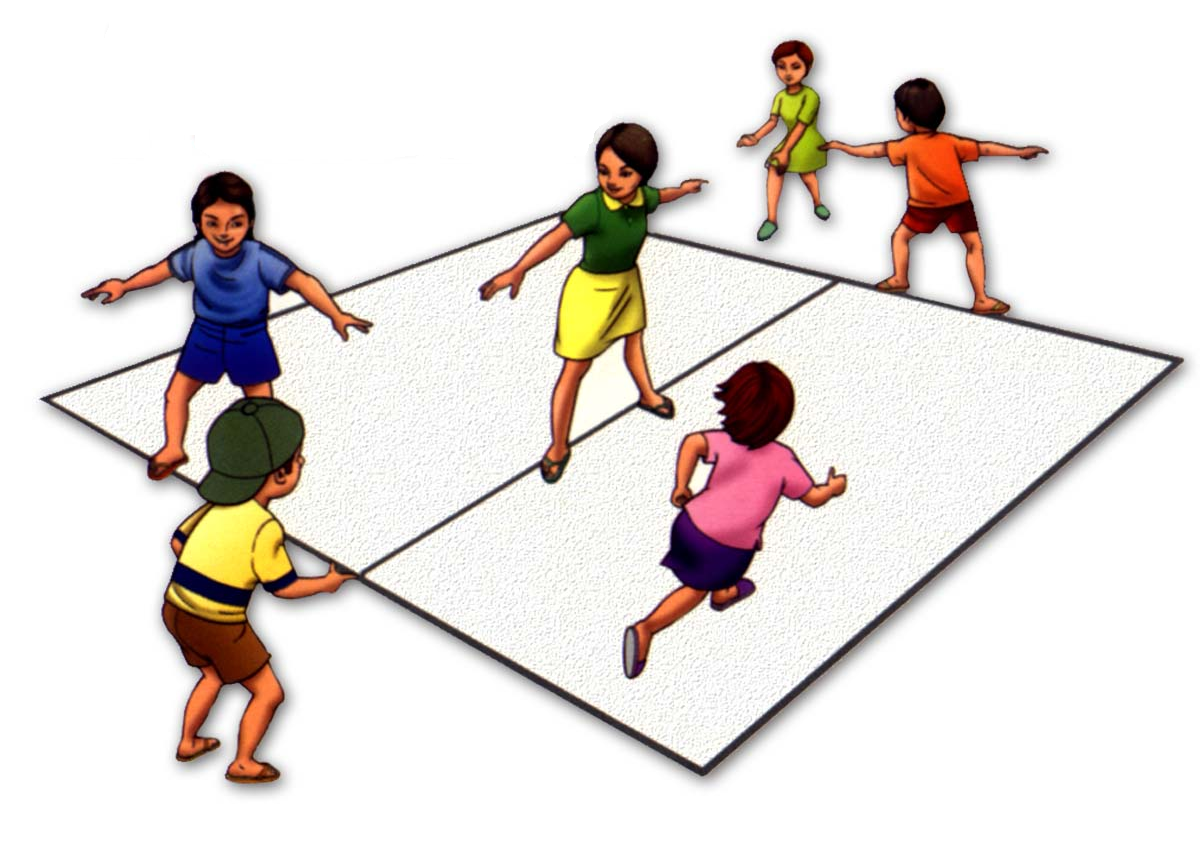 This is played with 6 or more players (and it’ll be easier if you have an even number of players). Divide the players into two teams. A grid needs to be drawn on the ground. Vertical lines on the grid will depend on the number of people in the group, and a long line will divide the grid in the middle. A coin is flipped to determine who gets to be “It” or “Taya”. The members in the team chosen to be Taya will take their position on the grid as line guards while the other team stays on one side of the grid. The goal of the Taya is to stop the members of the other team from going through the grid and back by tagging them. If a person gets tagged, they’re out of the game. The line guards can only move on the vertical and horizontal lines. If the Taya team tags everyone on the other team before they cross the grid, then they win. But if a single member of the other team crosses the grid and back, the other team wins the game. 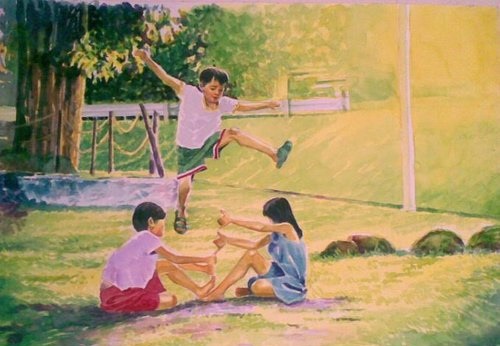 This roughly translates to “jumping off thorns” which describes the objective of the game. 4 to 6 people can play this game. The players are divided into two teams and a coin is flipped to determine who gets to be “It”. The It starts a base with two people sitting across each other with their right feet touching each other. The other team chooses a leader or a “Mother”. All the players of the other team must them jump over the base without touching it. The base becomes higher as those on the base places their left foot, and then their right hand, then their left hand every round to create a “wall of thorns” or tinik. If a player fails to jump over the wall, the Mother can save the person by jumper over for them. If the Mother fails, their team loses. 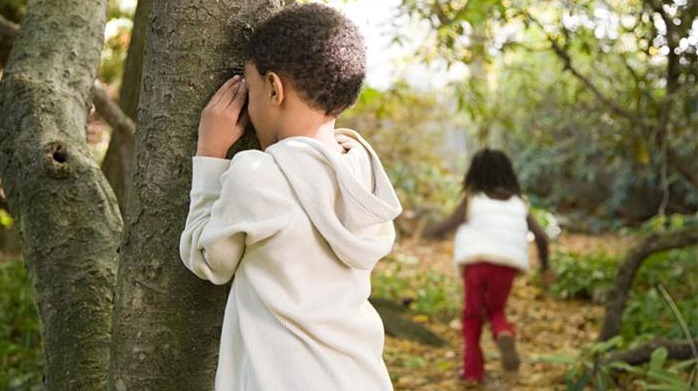 This is basically our vision of hide and seek. Many of us spent our childhood playing tagoan with our neighbors until dusk. The rules are simple. The more people the more challenging the game gets. One person is chosen to be “It”. The It counts from one to 10 while the other people find a place to hide. The It then looks for all the players until they find everyone. A few common alteration of the rules is that the IT also needs to make sure that no one tags his or her “home” or base. It’ll also be easier and safer if the players only stay in a specific are to find hiding places. After all, you don’t want your kids to run off to far away looking for a place to hide. 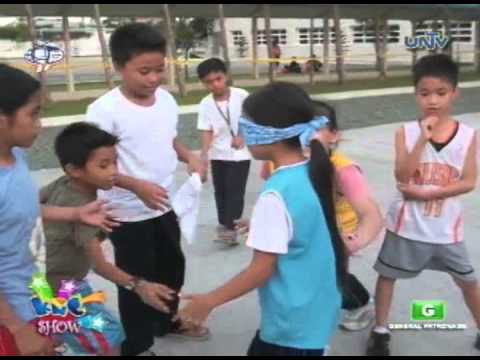 For this game, you’ll need a handkerchief. An “It” is chosen between the players and is blindfolded. The It spins while counting from one to five. During this time, the other players must scatter and fund a place to stay and hide. The blindfolded It then goes around looking for the other players.  They must stay silent so that the It can’t find them. If the it catches a person, he or she must guess who this person is. If the It fails, they have to find another person. The first person that gets caught and gets guest correctly become It on the next round. 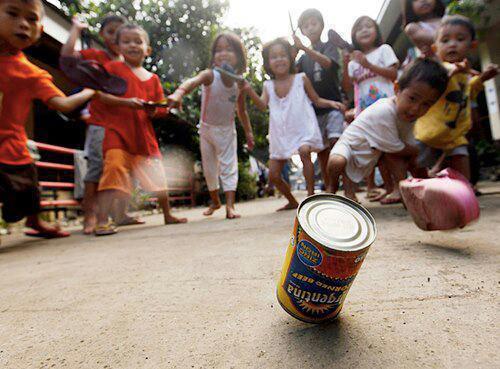 Get a tin can and your good old tsinelas (slippers) for this. The game can be played with four to ten people. An “It” watches over a tin can while the other players try to knock it down from behind a line a few meters away from the can. If they fail to knock the can out, the players must retrieve their slippers. The It can only tag players that already have their tsinelas in hand. If the It tags a person, they become the It for the next round. If the players successfully knock the can out, the It must place it back in to its original position before he or she can tag anyone. Players still need to retrieve their tsinelas if they knock out the can, but since the It is preoccupied with placing the can back to its place, it gives them more time to run. 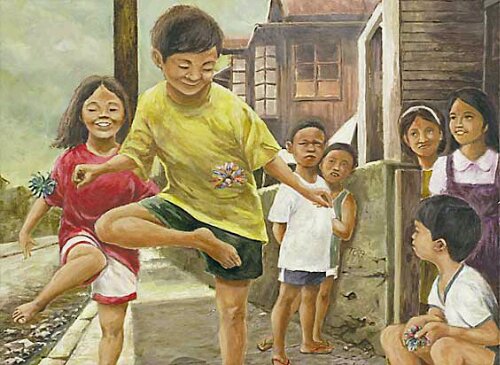 A Sipa or Takyan is a small metal washer that’s two inches in diameter. A small pile of colored straw rope is threaded into the middle of the washer. You can usually buy these from those little stores by schools or you can make one yourself. The goal of the game is keep the Sipa in the air by kicking it. Players can also use their ankle, elbows, and arms to hit the Sipa, but never the arm. Before the round starts, the players need to decide on how many numbers of kicks is needed to win. The first player or the Mano will toss the Sipa and kick it again and again until he misses or drops it. The other players then take turns kicking the Sipa. The player who gets the most number of kicks or reaches the agreed number wins. 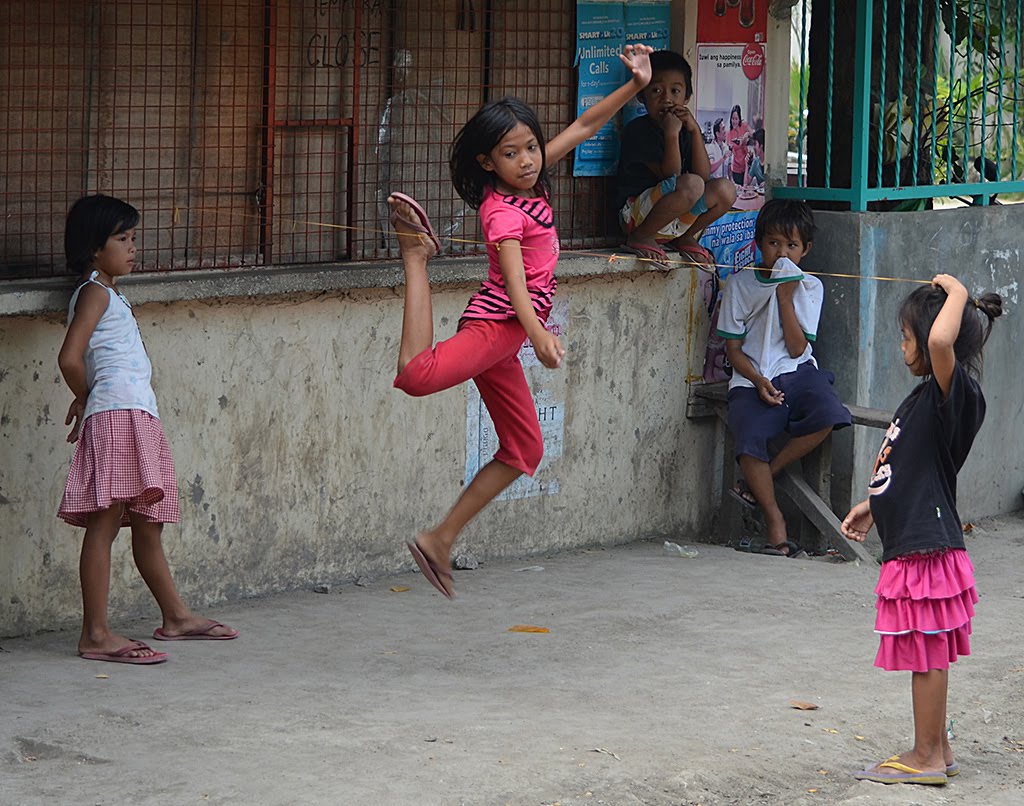 This game requires a lot of flexibility, coordination, and balance. It revolves around a simple, thin rubber garter that’s a few meters long.  A popular game amongst younger girls, the players are divided into two teams. During the game, two members from the It team will stand as post and hold the garter. The goal of the game is to be able to finish the different levels and be able to jump over the garter as it gradually is set higher and higher. 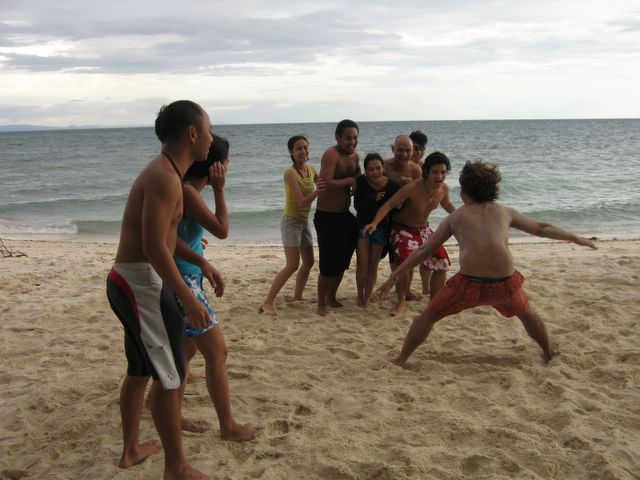 This game is similar to a “capture the base” game. Two teams of the same number of members try to capture each other’s base. Usually, one of the members is left by the base to guard it while the others tag each other. If a member from the different team is tagged or “captured” by two or more members of the same team, the “prisoner” is taken back to their base. Members can save their tagged team members by tagging them. Prisoners can make this easier by extending their reach by making a human line from the base. Whichever team tags the opposite team’s base first wins. 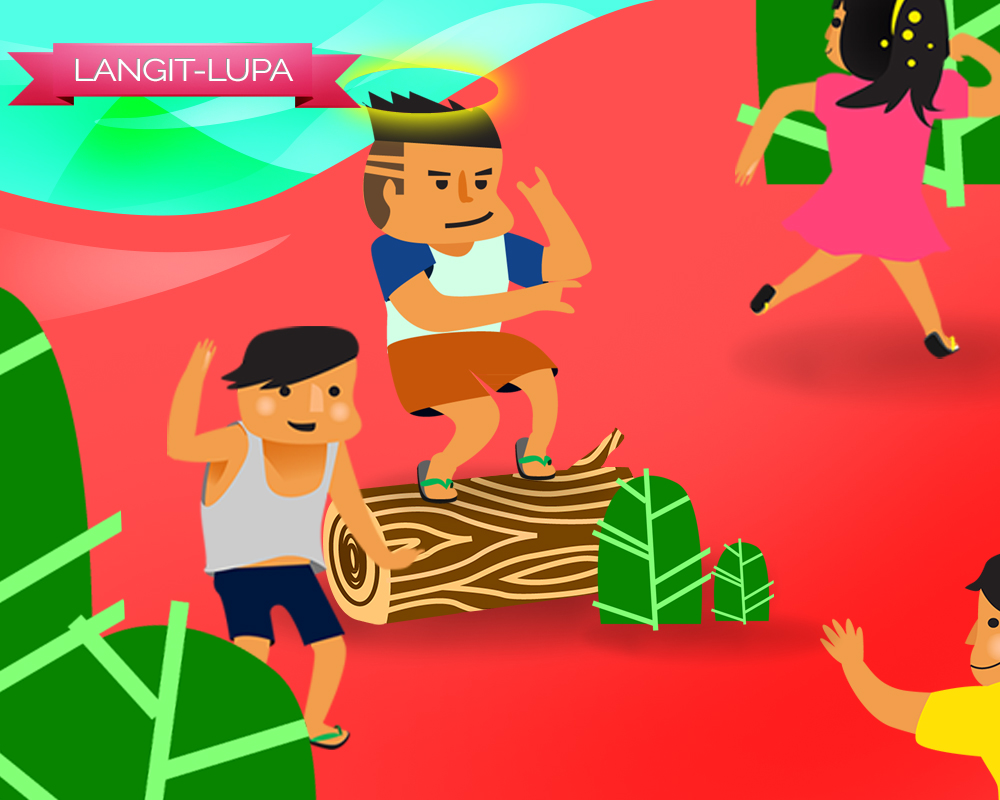 This game literarly translate to heaven and earth. An It chases around players who are in lupa or the ground and can save themselves by climbing over an object or langit. Only players on the ground can be tagged. The tagged player then becomes the It on the next round. The It can only tag players who remain on the ground, but not those who are standing in the langit. The tagged player then becomes “It” and the game continues. To avoid cheating, and to give the It a chance to tag someone, staying in langit is only limited to a few seconds. 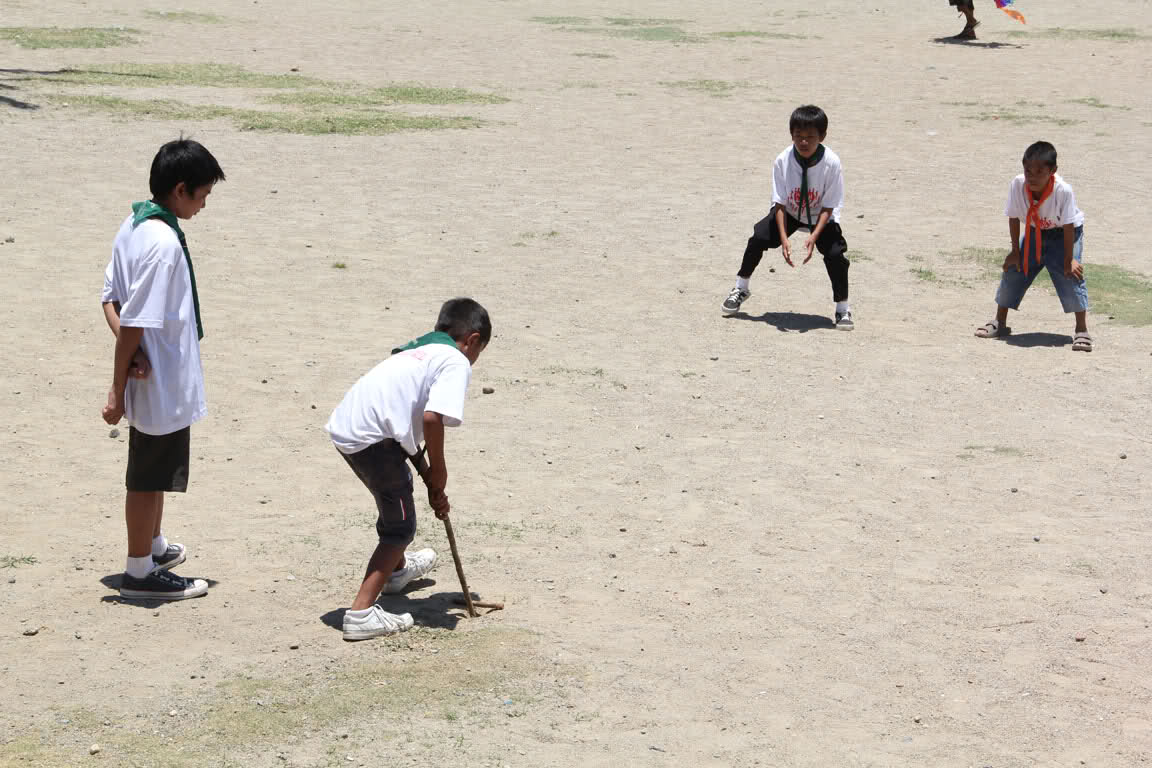 Also called Pitiw or Tsato, this game can be played by two or more people. If there are more than two players, they must be divided into two teams. For this, you’ll need two sticks, with one stick shorter than the other. A shallow hole is dug on the ground. The small stick is paced perpendicular to the hole. The first player (the hitter) will hit the shorter stick with the longer stick so it catches enough height. While the stick is on the air, the hitter must hit the shorter stick again as hard as they can. The second player (the catcher) must catch the stick or looks forward to the hitter missing the wood. If they fail to catch it, the hitting team can continue to play. The further the wood gets hit the more points you get (usually counted by the number of stick length).