The Department of National Defense Secretary Delfin Lorenzana altogether with the heads of other agencies finally signed the Republic Act 9049 – also known as the Act Granting Monthly Gratuity and Privileges to an Awardee of the Medal of Valor – last July 2019. This was after making some provisions of President Rodrigo Duterte signed a memorandum increasing the monthly gratuity of MOV awardees from P20,000 to P75,000 last December 22, 2016. The RA9040 is a law passed in 2001 which mandates the provision of adequate social services and financial reward or lifetime monthly gratuity to MOV awardees and dependents of deceased MOV awardees – also covering precedence in employment in government agencies, priority in the approval of an awardee’s housing application under existing housing programs of the government, priority in the acquisition of public lands, privilege of obtaining financial institutions without having to put up any collateral or constitute any pledge or mortgage to secure the payment of the loan, 20 percent discount from various establishments and services, free medical and dental services and consultation in hospitals and clinics anywhere in the country, exemption from the payment of tuition and matriculation fees, and waived terminal fees in the Ninoy Aquino International Airport for MOV awardees and dependents. 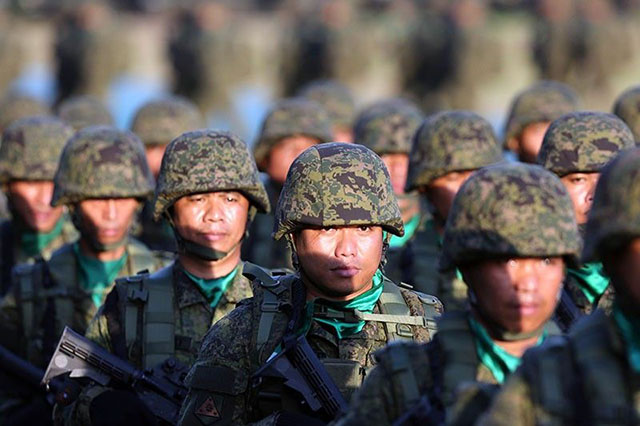 At the present, there are 41 Medal of valor awardees in the country wherein 25 are deceased, 12 have retired, while 4 are still active in service. One of them is Lieutenant Colonel Herbert D. Dilag – a Cordilleran warrior who has exhibited unparalleled bravery, exceptional heroism, and highest degree of leadership.

According to the reports, the young and spirited 2Lt. Dilag volunteered to lead the suicide squad – which was composed of 14 volunteer scout rangers – who were tasked to attack the 210 fully-armed members of the Abu Sayaff Group who were holding 28 hostages at the notorious 898 Hill inside Camp Abdurajak in April 2000.

Anticipating their deaths, the members of the squad left their prized possessions, which are to be given to their loved ones, to their supporting comrades. The Squad was able to bypass 48 enemy improvised landmines as they head up the 30-meter 80-degree slope. With their exemplary skills, they were able to secure and clear the area. The intense fight between the Suicide Squad lasted for three days. They were able to kill 68 members of the Abu Sayyaf Group and recover unharmed hostages.

During the three-day fight, the fourteen members of the squad suffered massive casualties; however, 2Lt. Dilag bravely carried his men one by one and placed them on a safe location while singly-handedly stood his ground, acting still as the team leader while only one sniper was left to shoot the enemy mortar operator and machine gunners. The young lieutenant killed 27 rebels during the assault which resulted to the demoralization of the enemies, forcing them to back down, and paving the way for the main troops to finally secure the area.

Dilag shared: We woke up at 2:00 then we took off. We hadn’t slept and it was raining. Our progress was slow due to the thick jungle growth. When we engaged the enemy, we had to use one hand to hold unto tree roots, while the other hand fired the weapon. For 24 hours we withstood the steep terrain, hunger, tension and fatigue.  Then you would hear the groans of your wounded comrades saying, ‘Sir, let’s retreat, I’m suffering blood loss. My wounds hurt, will I live sir’, words to that effect. You will then discover that you do have an untapped reservoir of courage.

Because of his display of exceptional courage and high degree of leadership and keeping the finest tradition of Filipino Soldiery, he was awarded with Medal of Valor – the highest award in the Armed Forces of the Philippines. He was literally tearing up while receiving the award from the President.