The Ultimate Guide to Buying Eyewear in the Philippines

Honestly, I think it’s safe to say when it comes to eyewear, there should be around 2 brand names that will almost certainly come into your mind, Ray-Ban or Oakley. This piece will hopefully help you get the most out of our money for any kind of eyewear shopping especially since we are in a tropical country where sunglasses is a must else you want to eye irritation or diseases. 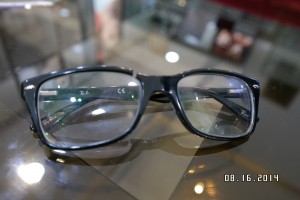 Till today, I’m more than certain most of us would still assume that these coveted brand names in eyewear are made in Italy and the US of A respectively. I too thought so. Stupidly so, if I may add. Last year, I bought my wifey a new pair of RX frames. I insisted she get an Oakley with titanium material as it should be more than enough to withstand our then 4 year old son’s antics. Before pulling the trigger on a PHP 15,000 (US$ 340) frame, I had to ask the George Optical sales staff if it was still made in the US. If I remember it correctly, they all had no direct or definite answer to it. I had to resort to inspecting all of the contents of the product and found no easy trace of where it was made except the aluminum casing which clearly stated made in China. Later on, I found a “made in China” text somewhere on the accompanying leaflet of it. This was less than a month or so of use already and this was after the paint job of the expensive frames all started falling off! I took it back to George Optical in SM City Cebu and they said they would gladly send it to Manila or somewhere for processing or probably repainting. I knew this would take forever and my wife can’t afford to NOT SEE forever so I declined. 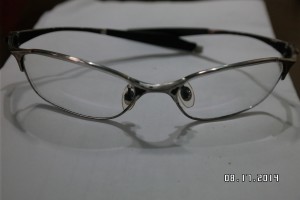 To make things worse, at least for my part, I fell for the very same misconception less than a year after the Oakley fiasco. My 7 year old Rudy Project RX frames had died on me, one of the titanium arms (brackets) had finally given up after years of bending to get my desired fit. As this was again an emergency for me, I had to rush and get me a new pair. I thought I’d still go for an established make especially since I have no time to keep going to the mall for replacements and whatnot if something is to go amiss. I grabbed me a pair of Ray-Ban Wayfarer RX frames from The Optical Shop in SM. All went as expected of it up until 5 months or so… The top of the frame SNAPPED while I was cleaning it and a little bending for adjustment! That’s PHP 9,000 (US$200) that just snapped on me in less than half a year of use (not even abused)! 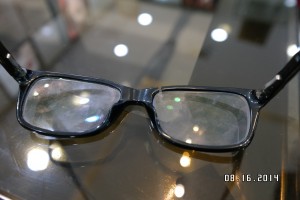 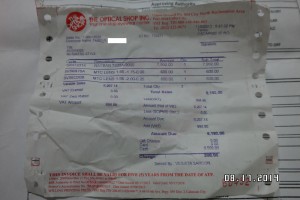 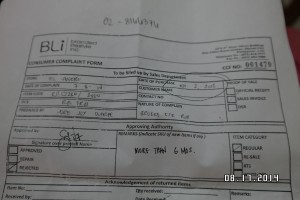 RayBan Philippines Reply to my Complaint – DENIED MORE THAN 6 MONTHS!

Then I questioned its quality again. I did my research and boom! People have been led wrong again for these glasses to be made in Italy as they are now… You’ve guessed it! Made in China! Took it to The Optical Shop and they took pictures and made a report about it and sent it to their Manila head office of sorts. After a week, a letter came in saying my frames are OUT OF WARRANTY or beyond 6 months. Check the letter for yourself. Worst? They didn’t even try to REPAIR my frames! I could have felt better if they at least tried to say, “What about let’s just put some heat to that snapped frame to glue it back again and make it somewhat usable…”. Nothing! As if I hadn’t given them money! Lolz

What Eyewear to Buy Instead

Given we are in the Philippines and the corporate/retail return and warranty policies here aren’t as great compared to developed countries, I have one advise for everyone trying to get them eyewear: Stay away from LUXOTTICA. Luxottica is the company that owns eyewear brands the likes of Ray-Ban, Oakley, and almost 80% of the eyewear brands that we can find in this country. Although I’m not sure if all of their brands are made in China or that they are made of great quality regardless of where they are made, I think my experience with 2 of their products in less than a year is more than enough to tell you something is wrong. We are paying this company Italian or American labor for products made in China and worst, at a standard way below the price tag they carry. If you’re in the market for performance/sports eyewear, I’d say look for something else rather than Oakley. If you just want something to conceal your eyes just as celebrities do, by all means by cheaper alternatives – even the knock-offs you see all over the streets of the Philippines. If your one of them concern about image, just where a PHP 50,000 watch and believe me, nobody will even think you’re wearing fake eyewear or fake anything for that matter.

To make things more interesting, I’ve talked to an eyewear technician acquaintance of mine about these 2 brands and asked if he’d had issues with them as well. He said he never did but his other technician friend broke an Oakley while trying to install lenses on them. Another friend who dons eyeglasses also heard of such stories from his friend whose in the know in terms of eyewear. Of course these are just their stories so I can’t attest to them in anyway but as the old adage says, “if there’s smoke there’s fire”. So help others out by sharing your stories on these by commenting below. Pics will do wonders too! I for one can say Rudy Project gave me 7 years, so you might want to check them out. They are made in Italy. Although I hate the fact that I couldn’t buy new arms/brackets for my frames but given the fact that my Ray-Ban didn’t even give me a year, I’d say this is negligible. If you’re in the market for designer eyewear, then you’re better off with say Spyder or any other make that will tell you exactly where they are made and they come with a more reasonable price tag. What about you? Please share your eyewear experiences so others may be better informed….