Things Foreigners Should Never Do in the Philippines

With all the tourist spots the “Pearl of the Orient” has to offer, it’s no surprise many expats have found “heaven” under this tropical paradise. However, for the uninitiated, it could be the total opposite. Much like navigating a right-hand-drive car in the busy streets of Manila. Read: a taste of hell on Earth.

To boot, Philippines is a beautiful, beautiful country but let’s face it, Filipinos are no angels. Proof: Just take away traffic enforcers in the streets of the cities Manila or Cebu. For a wandering expat wanting to make the most of his stay, a little reality check should be timely. On the other end of the spectrum, Philippines is no WWII war zone, either. It’s a civilized country made up of a 100 million citizens – largely Catholic and mostly poor. Disturbing conflicts erupt every once in a while, true. But they’re more of the exception rather than the rule. The good part: Living in the Philippines is cheap compared to Western standards. Yes, it may not bore a big, big hole in your wallet. Granting, you know how to navigate. 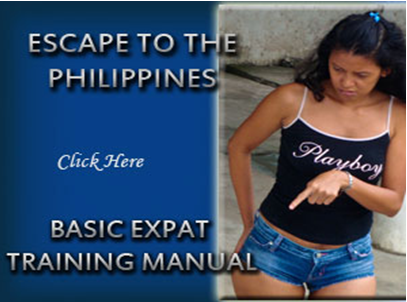 Friends, Pinoys, every Juan, lend me your ears. Here’s an offering to all foreigners who wish to make the most of their stay: The Top 10 Big Mistakes for Expats. Enjoy!

You like the fine white-sand beaches. You enjoy the rides. The kayaking, the endless supply of islands to conquer. It feels like heaven and you want to stay forever. Now that you’re running low on funds, you’re thinking of finding a job.

Reality: Philippines is a third-world country. Many people live below poverty line here. Yes, you may land a job but it won’t pay as much. Read: 1/5 or lower Western standards. If that’s ok with you, go on.

However, good news! If you want to push it, try the call center industry. You could easily get hired if your British or American. Granting you’re a night owl and working on night shifts A-OK with you and your knees can bare the traffic everyday.

Big Mistake #2: Hope to Own Properties

Expats are forbidden by law to own land, so don’t aim to buy one. The biggest you can put your money to is a condo unit. You can have one. Or you can start a corporation to buy lands but 60% of the business has to be controlled by Filipinos. And you can also marry a Filipina and put the properties (e.g. land, real estate) under her name. However, be warned: To keep using the land, you have to stay married. Once you separate or your wife dies, the lot in question is in limbo. And else you forget, circumventing the law makes you a law-breaker in no time.

If you really want to stay in the Philippines for good, you can. At an extreme price: Stay continuously for 10 years in the country and then denounce your citizenship and be a Filipino. Ugh!

Big Mistake #3: Be Swept by Love

Yes, love is blind. And because of this, it can make you lose a lot of money. Stories abound. The love bug can hit you just like that. If you’re not careful, it can be your greatest folly. True, there are many internet stories about happy-ever-after couples that met online. However, think. How could you love someone you haven’t really known?

The solution: Don’t let your passion lead you. Apply the brakes and do what’s necessary. Meet up and spend time to learn about each other. Ample time. Don’t be fooled. Marriage is final. It’s easy for a woman to profess all the love as long as you have all the money.

In case you didn’t ask: Unscrupulous individuals have made a living out of making unsuspecting people fall in love.

Business is not for the faint-hearted. If you fancy business, think hard. Innovate. Don’t take the lead of Filipinos who are cash-strapped and venture into small sari-sari stores ending up with minimal profit. Following that way of thinking will lead you more of the same results.

Make sure you have a solid business plan and you apply yourself through and through. If not, chances are you fizzle out and end up just throwing money around.

For a visiting tourist who just wants to do a triathlon (e.g., IronMan), things are a lot simpler. You book a hotel, book some tour, see some beaches and leave. However, for an expat who decide to stay longer, 3 months to a year or more, it’s a totally different story.

Then you have to dig deeper and know the subtle differences in culture to enjoy your stay. Because you will have to develop functional relationships with the people around you and that one takes more than just time.

Yes, commodities are cheap especially if you’re British or American. But don’t splurge. If you’re planning to stay a little longer, budget your finances. Remember, you got to eat every day. Factor: a place to stay, food, electricity, water to drink, cable TV, internet. As you see, things can easily add up.

It’s easy to get over your heads and lose thousands on booze and bad company, too. Not to mention women. Treat money like a jealous wife and you’d be fine. Unless Bill Gates is your Dad and you’re a stockholder of Microsoft.

As much as possible, be discreet. Showing money around can only attract the wrong people to you – like flies to the garbage. A thousand pesos is already 3 times the regular pay of most people who do an honest living. Whenever possible, bring only enough money with you.

Like any country, Philippines has its own fair share of hooligans, drug addicts and criminals. Some of these people are downright evil: If the circumstances present themselves, they will not hesitate to kill for easy money. Don’t be a fool. Money can spell trouble so let the banks keep it. Or better yet, use plastic.

Do your research ahead of time. Surprises can cost you delays. Google your destinations and talk to your contacts weeks before you fly. Internet should be a good resource. As for streets, you can do a street map via Google Maps.

Strangers should be your last resort. And if you go by them, you’re already at the losing side of the bargain. Try traffic officers and policemen instead or for that matter, the barangay captain. Every small place has one. Careful planning can save you precious time and money – not to mention lives.

Don’t think too highly of yourself. You may come into conclusion that under no circumstances can you be duped. Think again, there are many instances where expats have sold their belongings (e.g., jewelry, expensive gadgets) to invest in seemingly harmless schemes. And end up broke.

Filipinos are very respectful of expats. To some extent, almost like a servant to a king. But don’t be cocky. For instance, you can be an “ugly American” in no time if you’re rude. Relationships are a two-way street. If you start pushing people around, you may end up being kicked too.

Learn the culture and respect it. For one, Pinoys have a high regard for religion. Filipino homes are a display of statues and religious icons. Knowing what they hold highly is key to a wonderful relationship. Saves you the trouble. Especially the ones after a round of cold beer.

So there you have it, folks. Hope that was informative enough. Surely, there are many things that may have been left out. Please let us know your thoughts and lay your 2 cents neatly on the comments section below. I welcome them with arms wide open. However contradictory they may be.

Also, do take part in our little sharing program. Send an expat friend some loving their way. All thing’s considered, no matter the skin, no matter the country, all men have things in common more than you think.

Take away the headgear of Arabs, the slanted eyes of the Chinese and the skin color of Africans, and you have a human being – born of a mother and a father – and wanting respect and some attention. Some, maybe more than others. Classic example: Hitler.

Let me end up with a quote from a very extraordinary scientist-couple, Pierre and Marie Curie, which goes: “Nothing is to be feared. It is only to be understood.”