Top 10 Newsmakers Who Stole Every Pinoy’s Attention in 2014

There are many things that have defined 2014. Many events that have transpired that have their own shock and awe factor. None can claim as much prowess though than the 10 below.

Much like the anger built inside Taal Volcano, we may never really get to the bottom of these 10 newsmakers. What we see are but the workings outside. We see the results. But the wheeling and dealing are out of our sight. The forces that have made the 10 figures below happen are as complex as the circuitry in a microchip. Reading them however could be the ultimate test. Truly, the future of Las Islas Filipinas is already unfolding. We just can’t make much of these cards that are spilt before us.

Ladies and gentlemen, 10 of the biggest newsmakers that have captured the attention of the whole Philippines: Of course, as the 2nd most powerful person in Planet Philippines VP Binay should be attracting attention. But this time he seemed to have upped the ante with his latest antics late 2014. Starting with Makati overpricing issue thrown at him by no less than his former Vice Mayor Mercado, his long-time partner in politics to a Batangas estate he allegedly owns that is flowing with affluence, ordinary mansions will be put to shame.

And lastly his crème-a-la-crème for 2014: His no-show in the senate inquiries, many equate with dodging and his backing out of a debate with young feisty senator Trillanes, a debate he himself instigated. He’s taking a beating as his popularity slips according to latest surveys. But he has built such a huge lead over his major rivals in the presidency, he is still the #1 contender to the soon-to-be-vacated post. 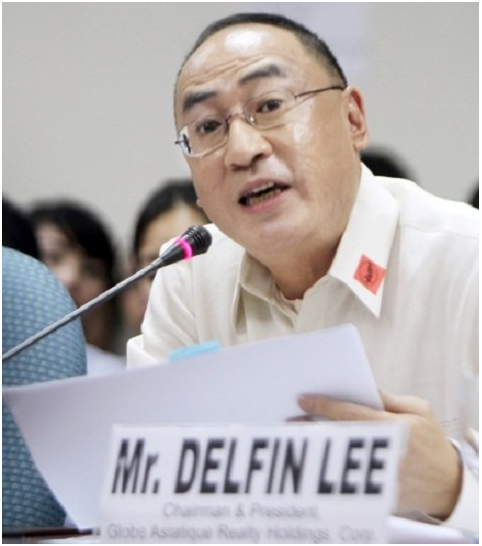 The bigger they are, the harder they fall. Certainly, his fall from grace has become a fodder for almost every Juan’s chismis skills. And finally, this 2014, after meticulous police work, Delfin Lee, the builder of quality homes for thousands, has been arrested in a hotel lobby. My o my! You would not think this man is capable of embezzling billions right?

And since his charges are of syndicated estafa, his worries has just began to multiply – like never before. 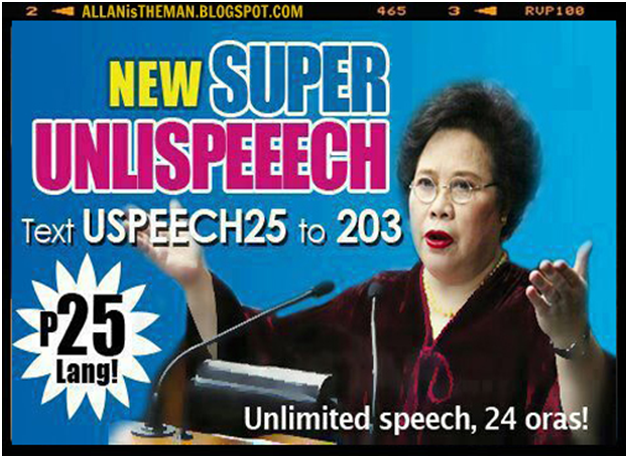 With her wittiness in full display via her punchlines, Miriam’s popularity surges. But come July she got the surprise of his life when medical findings show she has cancer, more specifically lung cancer. The sickness has sent shockwaves to a nation already in fear of the onslaught of major natural disasters (i.e., Mayon Volcano). She recalculated her goals and resigned from her post as judge at the International Criminal Court.

With her health reviving, she dropped another bombshell to Las Islas, hinting she may run for the highest post of the land come 2016. Now that would be interesting as it pits human rights lawyer VP Binay vs. Judge Senator Santiago. 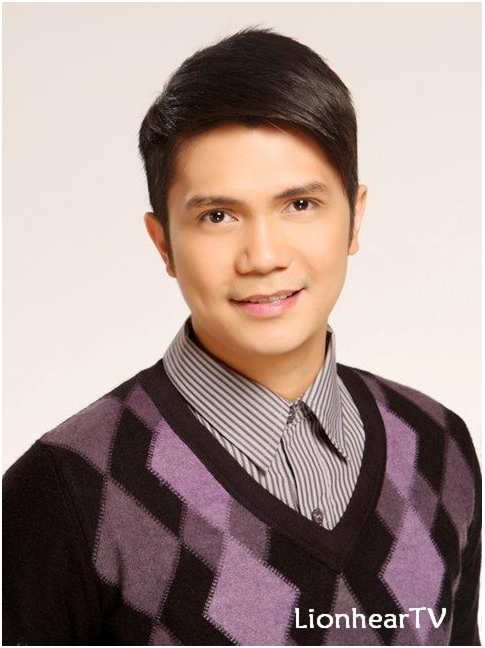 And for a change, a lover boy who got caught in what could be the surprise of his life. His badly-damaged face thanks to businessman Cedric Lee et al, got a nation pouring its sympathy on his cause. And as for his love interest, the always-okay Denice Cornejo, most every Juan wanted to have a piece of her for her strong gifts of imagination. It did not help that CCTV footage proved the beautiful model’s cry for help was actually largely fabricated.

The rape case against Vhong has been dismissed. But before he could have the time to enjoy his good luck, he sees how Cornejo and mortal enemy Cedric Lee were set free from prison after posting bail. 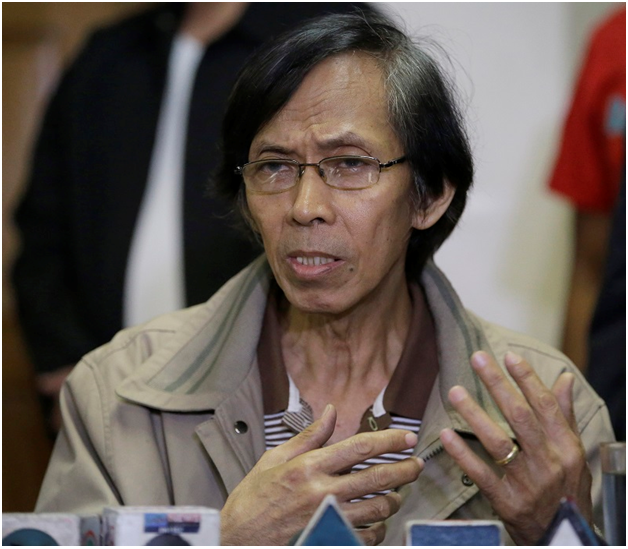 Finally, the long arm of the law has caught up with the ex-general ex-Congressman Jovito Palparan as he was captured in a humble hide-out at Sta. Mesa, Manila. Pain seem to be etched all over this former government stalwart and you can see he has not regained his powerful stature ever since he went on hiding. Looks like we have a lot of kneading to do to arrive at the truth.

Granting he survives and his detractors – mostly leftist – not get him first. 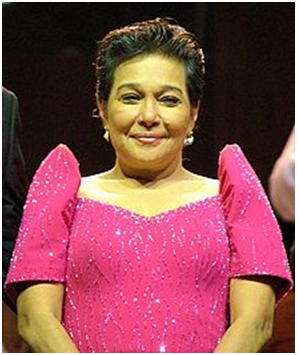 Nora has done it all and she is the only true superstar ever in this side of the planet. But all the awards and all the accolades could not convince the most powerful man in Planet Philippines of Nora’s eligibility as a National Artist. And appropriately, in July President Pnoy strongly disagreed that dear superstar Nora should be conferred of the most prestigious award.

No worries. She’s still as popular as ever. And it’s the fans that matters most. Right? 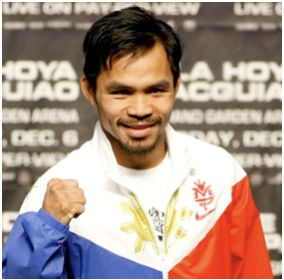 This year must be the best Pacquiao year ever. He is enjoying the fruits of a successful political win with his family well settled into various elected posts in the province. In boxing, he was proven his worth once again defeating two opponents (Bradley and Algieri). And yet he has added a new chapter in his life. This 2014 he has shown his basketball skills for the whole world to see by joining the PBA as a playing coach.
Wow! What a man! And still his wife is not complaining as this year Jinkee gave birth to their 5th child, a son named Israel. She may have mended fences with her former political enemies starting with former President Gloria Macapagal-Arroyo. Perhaps in an act of piety, the former first lady called the sitting president inhuman or to be exact unjust and cruel for putting Gloria under hospital arrest.

Yet before the year ended, her collection of prized paintings which included those of Michelangelo, Pablo Picasso and Goya were lost to thieves. Talk about a thief stealing from another thief. 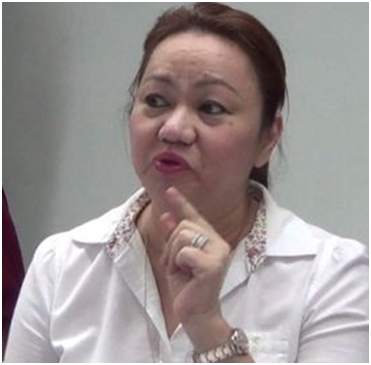 She may be enjoying a respite this year in comparison to 2013 when she hugged the limelight like no one did before her. Still, she is making the newsrooms busier than ever. Rumors of her profuse bleeding along with her having sex right at the hospital just can’t wait to get printed in the dailies and reported online.
It was in June this year that wily Napoles have finally been charged with plunder along with the 3 stooges I mean senators. 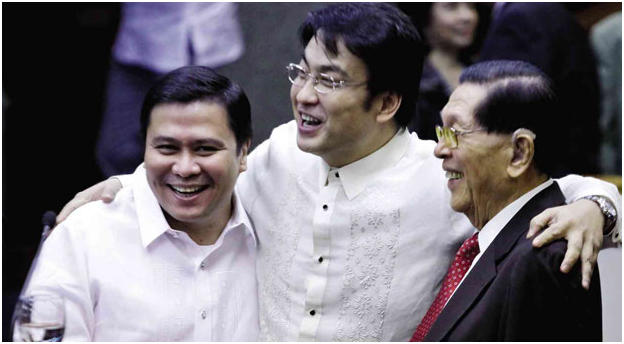 And finally, the 3 musketeers who pledged their innocence like it was the first word they learned in school. They were no crooks. Still all the pronouncements and perhaps theatrics could not stop the law from putting them behind bars. And by June after graft charges were filed, in they go to Camp Crame detention. Lucky Enrile, his age may have worked for him and he got but hospital arrest at the PGH.