TOP 10 MOST POWERFUL WOMEN IN THE PHILIPPINES

Nowadays, it may not be the male specie that is calling the shots. As we increasingly find in the corporate world and in politics, it’s the skirted bunch that gets the job done.

Yes, this Valentine we pay tribute to the hands that not only rock the cradle but also in a lot of ways, rock our nation, Las Islas Filipinas.

Gentlemen and ladies, the most powerful women in the Philippines today. 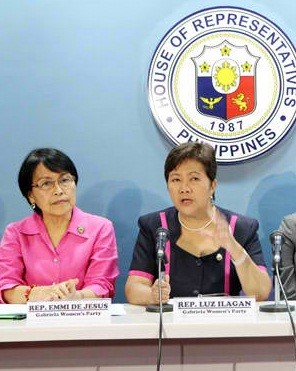 The organization named after that brave heroine from Ilocos, Gabriela Silang, who died fighting Spanish oppression, has from the very start of its inception been at the forefront of protecting women. Like an umbrella against the rain, Gabriela in its 20-or-more years of existence has protected the rights of women advancing such remarkable legislature among them the Magna Carta of Women, Anti-Violence against Women and Children Act, Anti-Torture Law, Anti-Trafficking in Persons Law, and Juvenile Justice and Welfare Act through its representative arm Gabriela Women’s Party (GWP) in congress.

No wonder its voices in that august body, representatives Luzviminda Ilagan and Emmi de Jesus, have emboldened many a trampled women. In effect these two congresswomen have become powerful voices for women all over Planet Philippines. 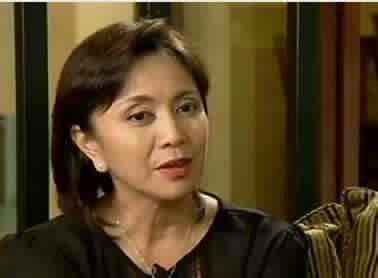 Responding to the clamor for leadership from her people, Atty. Leni Gerona-Robredo or Leni has earned the respect and tremendous power wielded by her late husband Secretary Robredo who died in a tragic plane accident. Determined to serve her people as her famous hubby did, she ran for a congressional seat even besting an old political clan, the Villafuertes of Camarines Sur, with a landslide victory.

Her stint was nothing short of spectacular despite the fact that she had no political experience except being the loving, homely wife of a powerful DILG chief. Not wanting to delve into political limelight initially, Leni, nevertheless thrive in it following the “tsinelas” bottom-up leadership style of her late husband and filing such landmark bill as the “Full Disclosure Bill” on her first day as the representative of her people. Aside from all these, she active at the forefront, supporting programs that aim to eliminate hunger and poverty. She may not have the physical strength of a man but for her tough, no-nonsense stance in leading the country’s top revenue collector, BIR, Commissioner Kim Henares has been dubbed the “Man of Steel.”

She made sure that everybody gets collected putting up various TV ads that made her message clear to everybody – the powerful including. And true to her word, she is soon caught in a word war with the most celebrated boxer of the country, Manny Pacquiao. Over issues of taxes, of course. Such much-publicized spats only show how her commitment to drive change. In an interview with GMA-7 the devoted career woman opened up, ““Kung mayroon tayong kinikita, dapat nagbabayad tayo ng buwis. Wala namang personalan ‘yan. Kung tama ang binabayad natin, walang problema.”

Her stint has not only improved the over-all efficiency of the bureau increasing tax collections by as much as 10 percent in 2011 alone, she has bannered the cause of paying taxes to every Juan like no man or woman before her. 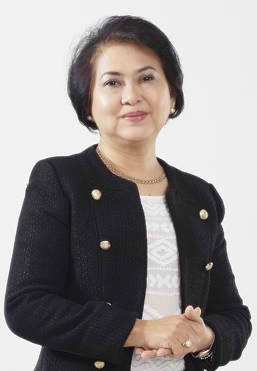 Her most lauded act was when she exposed various anomalies that surrounded the PDAF or Priority Development Assistance Fund. She is the first ever woman to become an audit commissioner holding a 30-year experience in accounting, finance and management under her belt. Prior to her post, she has served as the able commissioner for PCGG (Presidential Commission on Good Governance) in 2002 and was the finance undersecretary from the year 2003 up to 2005. Though many congressmen have slammed her for allegedly turning a blind eye on the 1-trillion missing fund on the DAP, her leadership has been largely phenomenal. 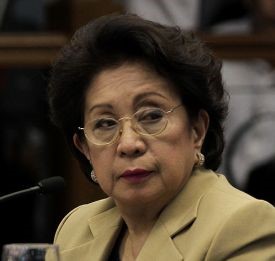 Her defiant stance against then sitting president Gloria Macapagal-Arroyo only cemented her reputation. Because of her steadfastness, Ombudsman Conchita was requested by newly-elected President PNoy Aquino to administer his oath of office as the most powerful leader of Las Islas Filipinas, becoming the first ever woman magistrate to do so. 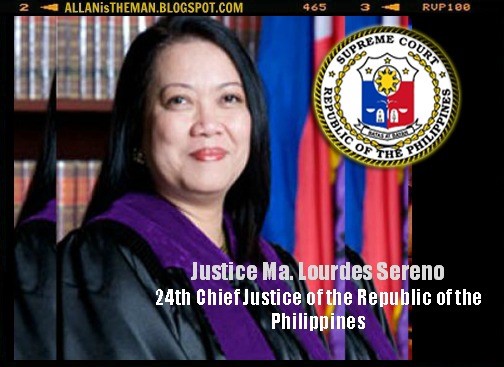 PNoy is surrounding his administration with lots of women, powerful, powerful women. (None for his love life though) And this does not hold truer than in the case of the the newly-appoited chief justice of the land, Justice Maria Lourdes Sereno replacing her former colleague, the embattled chief justice Corona.

For the record, Sereno is the first woman ever to have served as chief justice. Never in the history of the Philippines had there been one. In the process, she bypassed 5 senior judges, a move that has never been done before. Though not without her own set of flak as many critics saw her kowtowing to the Aquino administration in the issue of the Hacienda Luisita, Chief Justice Maria Lourdes Sereno is one woman you would not dare mess with. 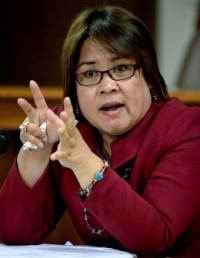 From a valiant defender of human rights (as chair of the Commission of Human Rights) to a no-holds-barred tough-talking Justice secretary, Secretary De Lima has since made her mark in a world dominated mostly by men.

Articulate and brave, her strong pronouncements have become her very trademark. Her ability to stand for what is right has been the stuff of legends. Because of these, she was retained by the Aquino administration in spite of the fact that she was installed during the time of the Arroyos. She showed class in pointing a finger at then interior undersecretary Ricardo Puno for the much-criticized Manila hostage crisis involving Hong Kong tourists in 2010. It was also under her stint that a warrant was issued against ex-general Jovito Palparan. In more ways than one, Justice Secretary de Lima has become a sower of the cause of justice, showing teeth where it matters most. 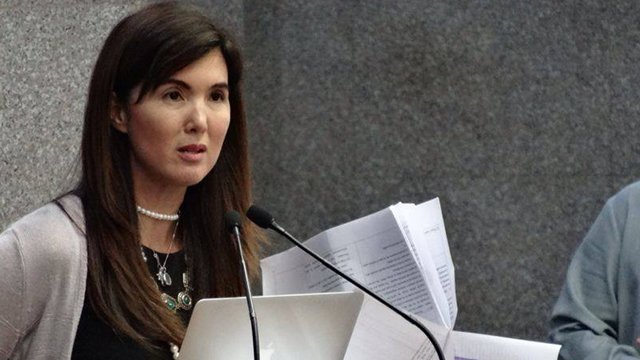 For grace and power all in one, nobody could discard the drawing power of Senator Pia Cayetano. From the onset, she has reaped praise as the youngest woman to be elected as a senator of the land in 2004.

Not only is she an efficient and effective legislator, her life has become a worthy model to be emulated by women of all ages. Under her wing as chair of the Senate Committees on Healthy and Demography and on Youth, Women and Family Relations, she has passed such landmark bills as the Reproductive Health law. Fighting for the rights of women, she has led the passage of the Expanding Breastfeeding Promotion Act.

She is a powerful presence as a legislator. For sheer charm and being “babaeng-babae” you’d have to give it to the #1 elected senator of the bunch, Senator Grace Poe-LLamanzares, adopted daughter of DaKing Fernando Poe. You can’t fault her for being soft-spoken and mild-mannered. But her thrust of service and of transparency is evident she could be the most thrustworthy senator if ever a poll were conducted today.

While many thought she would put the memory of her late father to shame for her lack of experience in legislature, she has indeed shown true excellence and grace in the halls of the best minds of the country. And never was her mettle more tested than in the recent Mamasapano hearings in the senate where the country gave witness to her calm demeanor in a very heated environment leading into a very successful prying of the truth. Though not conclusive, many Pinoys saw the strength in her resolve no matter the calm nature in her approaches.

Already, Senator Poe is amongst the leading contenders for the highest position in the land, as per recent surveys. She is second only to the ratings of the embattled VP Binay. 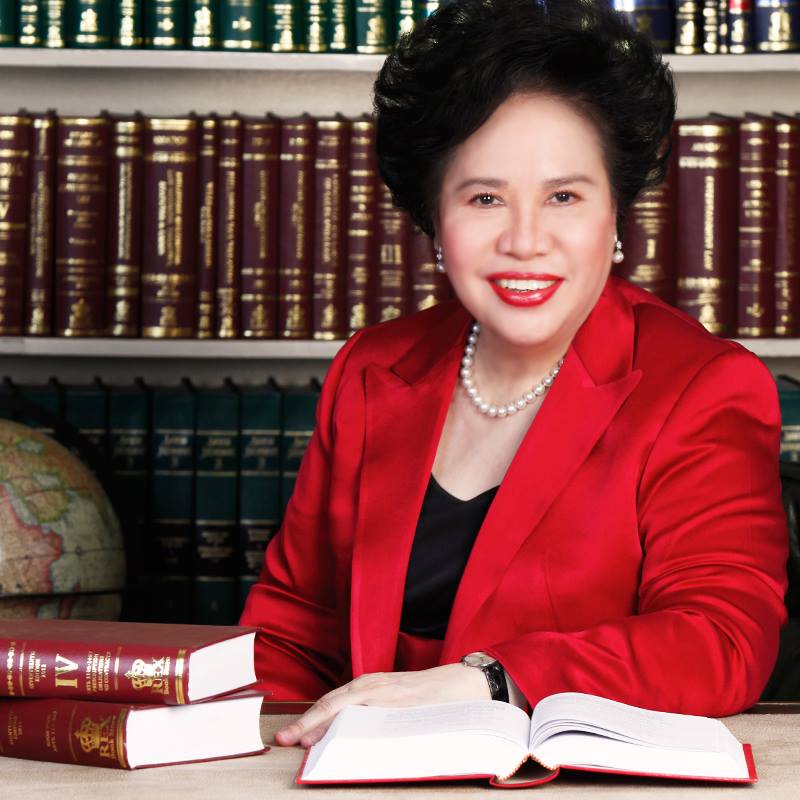 Nobody would argue the thunder and lightning that is Senator Santiago. If there was brilliancy at its most conspicuous and most frightening in the senate, dear lady senator would be in the running for the #1 pick. And everybody would agree.

Her record speak for itself. Voted 100 Most Powerful Women in Asia in 1996, she has shown to every Juan that women can indeed intimidate men, even the best of men. She has stood up to giants, giving no rest to former senate president Enrile, an elder statesman, for instance. And people want to hear her speak and pry the truth from the most corrupt of men or or women as the case of PDAF #1 suspect Napoles.

Had Miriam not lost in her bid for the presidency in 1992 (she lost to Ramos), she may have been in the best position to further the rights and welfare of the Pinays worldwide. Still, there is no doubt, nobody embodies a powerful Filipina more than the lady senator from Iloilo.

There you have it folks. Drop us your 2 cents in the comments section below. Or make that your shout-outs. For your social media needs, there’s the Quick Share buttons for your satisfaction. Ciao!